Peripheral devices are conceptually defined as those computer elements that are not part of the computers motherboard but must attach to the periphery of this self-contained system. Storage peripheral devices are connected using two distinct functions, the host adapter and the controller. Although at times they are integrated into one device, the distinctions between the two, though often fuzzy, are required for all storage attachment. These devices are depicted in Figure 6-1, which illustrates their proximity to the main computer system. The basic functionality of the host adapter allows peripheral devices to connect to a servers internal bus system. The controllers basic function, although it has many, allows multiple devices to communicate through one adapter path . Together they form the connectivity structure of a servers I/O system.

This encompasses all devices that process I/O from the server to include storage, but also printers, plotters , graphic displays, keyboards, and other devices that interact and are directly connected to the system. For our discussion, we will focus on storage devices. However, we will devote a portion of our discussion to network connectivity adapters given their integration and importance in developing storage networks.

A short discussion about network connectivity can provide an important set of principles that encompass the functions of direct device connectivity and how networks interface with the server. As shown in Figure 6-2, the Network Interface Card (NIC) connects the system bus to the external network, be it a local area network (LAN) or a wide area network (WAN). The components are the same as with any host adapter; it consists of an electronics card that connects to the server motherboard or a backplane. 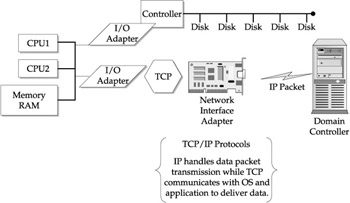 Figure 6-2: Connecting to the network

This is supported by a set of related software that interacts with the low-level hardware protocols and the operating system, sometimes referred to as firmware or microcode . Firmware refers to software instructions that interact directly with microprocessor components. These instructions are specific to the type of microprocessor being used and generally not accessible to users.

The functions of the Network Interface Card (NIC) are to transmit the identity of the server to the network, receive messages addressed to the server, and translate the network protocols to pass on to the operating system components. The user or application data and instructions encapsulated within the networking protocols can now be used by the servers applications.

On the out-bound side, the reverse takes place. The application turns over its data and target location to the operating system, which works with the NIC software drivers to encapsulate the data and ensure its transmitted in the correct way to the network.

The network software that enables this communicates and works with the NIC in TCP (Transmission Control Protocol) or IP (Internet Protocol). Together they form what is called the TCP/IP software layers , or stacksthe open systems standard used by all computer manufacturers to communicate within networks. As previously illustrated , we can view TCP/IP simply as the message format and envelope, where TCP allows the application and operating system to encapsulate the user data while the IP portion contains the envelope that transports the data to its network target locations.

As discussed previously, all peripheral devices have a host adapter and controller component. This concept, although viewed somewhat more abstractly in networks, is the same. However, to place this in its proper perspective we must view the other devices in the network as being externally connected, be they servers or clients . That means the controller functionality in networks consists of switches and routers that interconnect the multiple devicesin this case, other computers that are attached to the network.

Figure 6-3 extends the network diagram into the area of controllers, with switches, routers, telephone exchange equipment, and other WAN-related communication devices. As indicated in this illustration, the equipment and software that make up the network are numerous ; however, none of it needs to be known by the server or client, other than the network address. We have seen the high-level benefits and configurations when this concept is extended into storage components. Unlike traditional transient network traffic, storage I/O operations require a more defined protocol using the same host adapter and controller concepts. 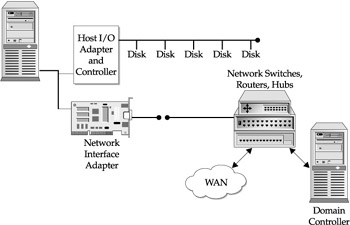 Figure 6-3: Overview of connectivity inside the network