By default, each user process on the 32-bit version of Windows 2000 can have up to a 2 GB private address space; the operating system takes the remaining 2 GB. Windows 2000 Advanced Server and Windows 2000 Datacenter Server support a boot-time option that allows 3-GB user address spaces. These two possible address space layouts are shown in Figure 7-7. 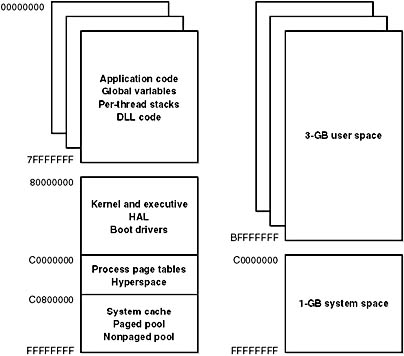 For a process to access the full 3-GB address space, the image file must have the IMAGE_FILE_LARGE_ADDRESS_AWARE flag set in the image header. Otherwise, Windows 2000 reserves the third gigabyte so that the application won't see virtual addresses greater than 0x7FFFFFFF. You set this flag by specifying the linker flag /LARGEADDRESSAWARE when building the executable. This flag has no effect when running the application on a system with a 2-GB user address space. (If you boot Windows 2000 Professional or Windows 2000 Server with the /3GB switch, system space is reduced to 1 GB, but user processes are still limited to 2 GB, even if the large-address-space aware flag is set on an image that is run.)

The virtual address space for Windows 95, Windows 98, and Windows Millennium Edition is organized a bit differently from that of Windows 2000. It also provides a 4-GB virtual 32-bit address space, allocating a 2-GB private address space to each process; but it divides the remaining 2 GB between system space (1 GB) and a single shared user space for all shared memory sections (1 GB), as shown here: 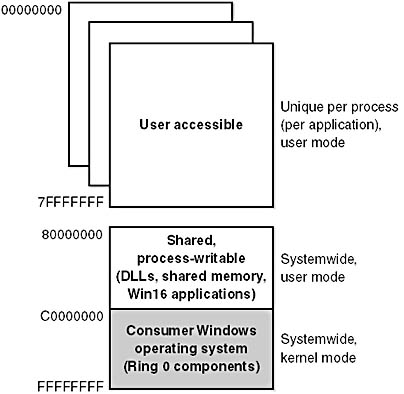 The 1-GB shared region is writable from user mode, so any Win32 process can write to shared memory sections or mapped files, even if they don't have that section object (file mapping object in Win32 terms) open. Windows 2000, on the other hand, places shared memory sections inside the private process address space, thus avoiding this security hole. Also, because all MS-DOS and Win16 applications are in this same shared 1-GB region, Win32 processes can corrupt the address space of Win16 and MS-DOS applications in Consumer Windows.

The system variables shown in Table 7-7 define the range of the user address space.

You can obtain the address space utilization of a single process via the process performance counters in Table 7-9.

There is also a performance object named Process Address Space that the Performance tool doesn't display. There are 32 counters associated with this object that identify the address space usage of the selected process. For each of the four types of process address space (Image, Mapped, Reserved, and Unassigned), eight separate counters exist (No Access, Read Only, Read/Write, Write Copy, Executable, Exec Read Only, Exec Read/Write, and Exec Write Copy). In addition, there are counters for the total process address space reserved and free. For even more details about user address space layouts, you can query the Image performance object to report per-image (for example, DLLs) memory utilization.

Try examining the various process memory performance counters listed in Tables 7-8 and 7-9 with the Performance tool. You can also use several other utilities to examine process physical and virtual memory usage.

For example, start Task Manager (press Ctrl+Shift+Esc), and click the Processes tab. Then from the View menu, choose Select Columns. Select Memory Usage and Virtual Memory Size, and then click OK. You should see a display like this: 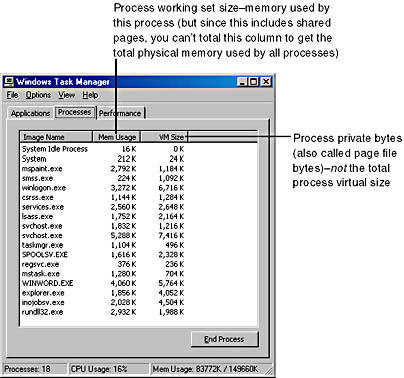 Keep in mind that the VM Size column is not the process virtual memory size but rather the process private virtual size (the same as the Process: Private Bytes performance counter described in Table 7-9).

Also, as you'll discover in the section on working sets, the Mem Usage column counts shared pages in each process's memory usage total.

The Process Viewer utility (Pviewer.exe in the Windows 2000 Support Tools; Pview.exe in the Platform SDK) can display per-process address space details. (The source of this utility is one of the Win32 sample programs on MSDN.) From the Start menu, select Programs/Windows 2000 Support Tools/Tools/Process Viewer, select a process, and click the Memory Detail button. You should see something like the following screen shot. Try clicking on the User Address Space For list box—you can select the address space used by the image alone or by loaded DLLs. 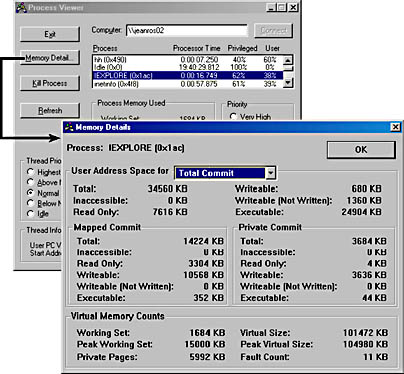 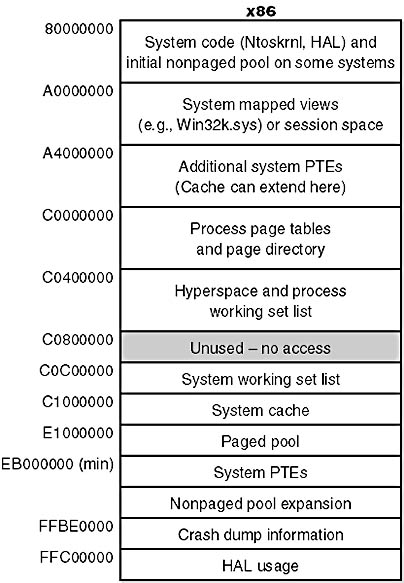 The x86 architecture has the following components in system space:

The rest of this section consists of two tables that list the detailed structure of system space. Table 7-10 lists the kernel variables that contain start and end addresses of various system space regions. Some of these regions are fixed; some are computed at system boot time on the basis of memory size and whether the system is running Windows 2000 Professional or Windows 2000 Server. Table 7-11 lists the structure of system space on x86 systems. Keep in mind that these tables reflect non-PAE systems. Systems running the PAE-enabled kernel image have a slightly different system address space layout.

* Because paged pool is limited by the start address of the region containing nonpaged pool and the system PTEs, it can go beyond address 0xEB000000 only if those addresses aren t used.

A session consists of the processes and other system objects (such as the window station, desktops, and windows) that represent a single user's workstation logon session. Each session has a session-specific paged pool area used by the kernel-mode portion of the Win32 subsystem (Win32k.sys) to allocate session-private GUI data structures. In addition, each session has its own copy of the Win32 subsystem process (Csrss.exe) and logon process (Winlogon.exe). The session manager process (Smss.exe) is responsible for creating new sessions, which includes loading a session-private copy of Win32k.sys, creating the session-private object manager namespace, and creating the session-specific instances of the Csrss and Winlogon processes.

To virtualize sessions, all sessionwide data structures are mapped into a region of system space called session space that begins at address 0xA0000000 and extends through address 0xA2FFFFFF. When a process is created, this range of addresses is mapped to the pages appropriate to the session that the process belongs to. Table 7-12 lists the layout of session space on systems with Terminal Services installed.