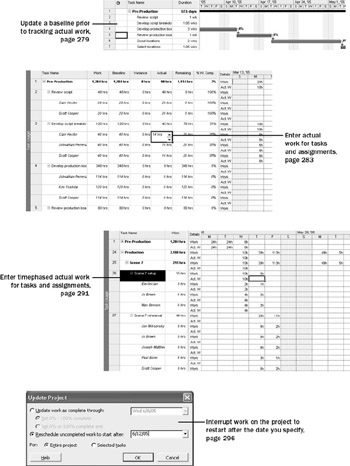 Building, verifying, and communicating a sound project plan might take much or even most of your time as a project manager. However, planning is only the first phase of managing your projects. After the planning is completed, the implementation of the project starts—carrying out the plan that was previously developed. Ideally, projects are implemented just as planned, but this is seldom the case. In general, the more complex the project plan and the longer its planned duration, the more opportunity there is for variance to appear. Variance is the difference between what you thought would happen (as recorded in the project plan) and what really happened (as recorded by your tracking method).

Properly tracking actual work and comparing it against the plan enables you to identify variance early and adjust the incomplete portion of the plan when necessary. If you completed Chapter 6, “Tracking Progress on Tasks,” you were introduced to the simpler ways of tracking actuals in a project plan. These include recording the percentage of a task that has been completed as well as its actual start and finish dates. These methods of tracking progress are fine for many projects, but Microsoft Office Project 2003 also supports more detailed ways of tracking.

In this chapter, you track task-level and assignment-level work totals and work per time period, such as work completed per week or per day. Information distributed over time is commonly known as timephased, so tracking work by time period is sometimes referred to as tracking timephased actuals. This is the most detailed level of tracking progress available in Project.

As with simpler tracking methods, tracking timephased actuals is a way to address the most basic questions of managing a project:

As a project manager, you must determine what level of tracking best meets the needs of your project plan and your stakeholders. As you might expect, the more detailed the tracking level, the more effort required from you and the resources assigned to tasks. This chapter exposes you to the most detailed tracking methods available in Project.

In this chapter, you work with different means of tracking work and handling incomplete work. You begin, however, by updating the project baseline.

If you completed Chapter 6, “Tracking Progress on Tasks,” you saved a baseline plan for a project plan. Recall that a baseline is a collection of important values in a project plan, such as the planned start dates, finish dates, and costs of tasks, resources, and assignments. When you save a baseline, Project takes a “snapshot” of the existing values and saves it in the Project plan for future comparison.

Keep in mind that the purpose of the baseline is to record what you expected the project plan to look like at one point in time. As time passes, however, you might need to change your expectations. After saving an initial baseline plan, you might need to fine-tune the project plan by adding or removing tasks or assignments, and so on. To keep an accurate baseline for later comparison, you have several options:

Depending on the scope and duration of your projects, you might want to save an interim plan at any of the following junctures: