The Estimation of the Model

The theoretical model shown in Figure 1 was estimated using Calis in PC SAS version 6.12. The estimation method used was maximum likelihood. The fit of this model to the data was good. The specific details of the estimation results are discussed in the Appendix. The results pertaining to the theoretical model are shown in Figure 2 and summarized here. 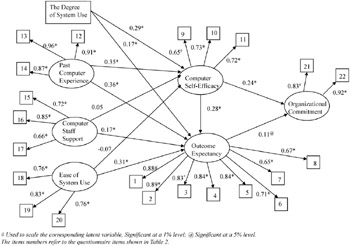