After a report has been developed, it is time to share that report with our users. This is when our report moves from its safe, childhood life inside a report project to its adult life on a Report Server. This is known as deploying the report. Let me assure you, reports pass through deployment much easier than you and I passed through adolescence!

The Report Server is the piece of the puzzle that makes Reporting Services the product it is. This is the software environment that enables us to share our report with the masses, at least those masses who have rights to the server. Figure 15-2 shows the functional structure of the Report Server. 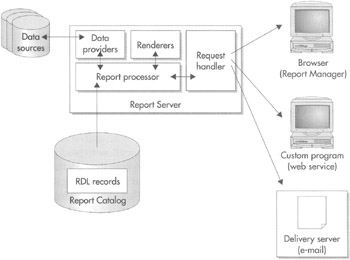 The Parts of the Whole

Reporting Services is not a single program that runs on a computer to produce reports. Instead, it is a series of services, web applications, and databases that work together to create a report management environment. As you plan your Reporting Services installation, it is important that you understand a little bit about each piece of the puzzle and how all these pieces work together to create a complete system.

Figure 15-3 shows all the parts that make up a complete Reporting Services installation. Each part has a specific role to play in the development, management, and delivery of reports or in the management of the Reporting Services environment itself. Let's take a look at each part and see how it fits into the whole. 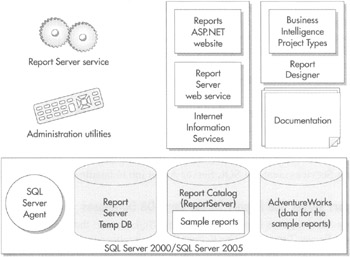 The Report Server service needs to have a valid user name and password that it can use to access the Report Catalog. This login information, along with other information that determines how the Report Server operates, is stored in the RSReportServer.config file. Most of the information in the RSReportServer.config file is stored as plain text and can be modified using Notepad or a similar text editor. The login information, however, is encrypted when it is stored in this file. It cannot be changed except through the administration utilities.

Most of these utility programs are run in a command window. The one administration utility that does have a Windows user interface is the Report Server Configuration Manager, which provides a convenient method for examining and modifying the configuration settings of a Reporting Services installation.

As the name implies, the Report Server Temp DB database is used as temporary storage for Reporting Services operations. Information can be stored here to track the current users on the Report Manager website. Short-term copies of some of the most recently executed reports are also stored here in what is known as the execution cache.

The Reports website is built using ASP.NET. This means ASP.NET support has to be enabled on IIS for the website to function.

The Report Server web service is also built using ASP.NET, so once again, ASP.NET support must be enabled on IIS for this feature to function.

In a distributed installation, the Reporting Services items discussed are not installed on a single computer. Instead, they are split between two computers that work together to create a complete Reporting Services system. One computer runs SQL Server 2000 or SQL Server 2005 and hosts the Report Server database. This is the database server. The other computer runs the Report Server service and IIS. This is the report server. 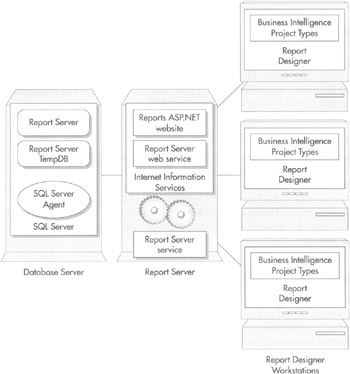 The distributed installation has advantages when it comes to scalability. Because the workload of the three server applications—IIS, SQL Server, and the Report Server—is divided between two servers, it can serve reports to a larger number of simultaneous users. The disadvantage of this type of installation is that it is more complex to install and administer. However, if we need a high-volume solution, it is certainly worth the effort to obtain a solution that can provide satisfactory response times under a heavy workload. 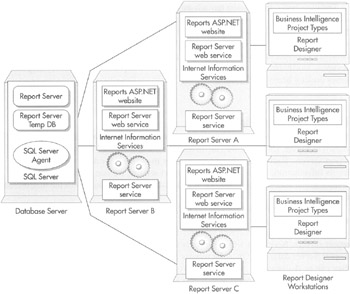 Again, note that Figure 15-5 shows only the servers and the report designer workstations. It does not show computers used for viewing reports.