Since before the invention of computers, the primary method for sharing business intelligence has been the report. This is slowly changing as BI tools become easier to use and more widely available. In fact, some of the tools and capabilities of SQL Server 2005 encourage that process.

Still, in the business intelligence world, the report is king. That being the case, it is important to have a capable and easy-to-use reporting environment at our disposal. Reporting Services fits that bill.

If Reporting Services were simply a report authoring environment, it would be a good tool. However, Reporting Services has much more to offer beyond just report creation. In fact, Reporting Services is a complete, enterprise-wide report management and distribution service. Reporting Services enables us to securely distribute reports throughout an organization using an existing intranet infrastructure and it provides for the integration of reports with both desktop and web-based applications.

The Report Builder is an outstanding tool for these types of users, but to be easy-to-use, it must remain fairly simple. Therefore, Report Builder cannot support all the many wonderful features of Reporting Services reports. The Report Designer offers far greater capabilities for creating interesting and highly functional reports used to convey business intelligence to report users. The Report Designer contains everything necessary to create a wide variety of reports for Reporting Services. Everything we need to select information from data sources, create a report layout, and test our creation is right at our fingertips. Best of all, the Report Designer is found in both the Business Intelligence Development Studio and in Visual Studio 2005.

Figure 15-1 shows this report structure in a little more detail. 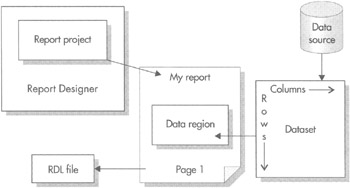 The content of the dataset is defined using a tool called the Query Designer. The Query Designer helps us build a database query. The database query may be in T-SQL for querying relational data, MDX for querying multidimensional data, or DMX for querying data mining data. The query provides instructions to the data source, telling it what data we want selected for our report. The query is stored in the report as part of the data definition.

The data the report has extracted into a dataset is not of much use to us unless we have some way of presenting it to the user. We need to specify which fields go in which locations on the screen or on paper. We also need to add things such as titles, headings, and page numbers. All of this forms the report layout.

The information in the data definition and the report layout is stored using the Report Definition Language (RDL). RDL is an Extensible Markup Language (XML) standard designed by Microsoft specifically for storing report definitions. This includes the data source instructions, the query information that defines the dataset, and the report layout. When we create a report in the Report Designer, it is saved in a file with an .RDL extension.

We have discussed how a report is created by the Report Server. What we have not discussed is where that report is going after it is created. The report may be sent to a user through the Report Manager website. It may be sent in response to a web service request that came, not from a user, but from another program. It may also be e-mailed to a user who has a subscription to that report.

In the Report Manager, reports are always displayed using the HTML format. Once a report has been displayed as an HTML page, the user can then export the report into any of the other available formats.

If the users do not want to go to the report, Reporting Services can make the report go to them. In other words, users do not necessarily need to come to the Report Manager website to receive a report. They can have the report delivered to them through a subscription service. The Report Manager enables users to locate a report on the site, and then subscribe to it, so it will be delivered to them in the future.

When users subscribe to a report, they provide an e-mail address to which the report is to be delivered, either as the body of the e-mail or as an e-mail attachment, depending on the requested format. Users can specify the format for the report at the time they create their subscription.

In addition to delivering reports to humans, either at their request or on a subscription basis, the request handler can deliver reports to other software applications. This is done through a series of web services. A program calls a web service on the Report Server, requesting a particular report in a particular format. The completed report is returned to the program that originated the request as the response to the web service request.