Other than Decimals, each of the preceding data types has literals that can be used for things such as initializing variables or as constants. In the preceding programs, I have shown many different literals. In this section, I go over them in more detail.

Octal numbers are hardly ever used anymore. They mainly are sticking around just for backward compatibility with some ancient programs. They are base-8 numbers and thus made up of the numbers 0 through 7. All octal numbers start with a 0. Some examples are as follows:

Integer numbers are straightforward. They are simply whole numbers. Some examples are as follows:

The symbols - and + are not actually part of the number but, in fact, are unary operators that convert the whole number into a negative or positive number. The + unary operator is assumed, so 1234 and +1234 mean the same thing.

Decimal numbers are the same as integer numbers, except they also contain a decimal and a fractional portion. They are used to represent real numbers. Some examples are as follows:

Just like integer numbers, the minus symbol (-) is a unary operator and not part of the decimal number.

An interesting feature that comes along with Managed C++ is that numeric literals are also objects. This means that they also have the ToString() method. Listing 2-10 shows a numeric literal object in action. Note that you need to surround the numeric literal with brackets.

Figure 2-11 shows the results of this little program. 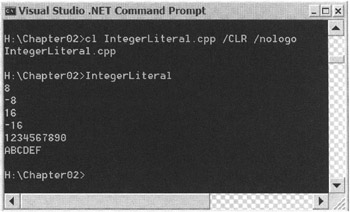 There are only two boolean literals: the values true and false.

Like numeric literals, boolean literals are objects in Managed C++. Thus, they too provide the ToString() method. Listing 2-11 shows a boolean literal object in action.

Figure 2-12 shows the results of this little program.

Character literals are the most basic form and are simply a printable letter, number, or symbol enclosed in single quotes. These literals can be placed in both Byte types (or any other integer type, for that matter) and Char types. Here are a few examples:

Escape sequences are a little more elaborate and come in a few flavors. Like the character literal form, escape sequences are placed within single quotes. The first character within the quotes is always a backslash (\). After the backslash will be a character such as the ones shown in Table 2-7, an octal number, or an x followed by a hexadecimal number. The octal or hexadecimal numbers are the numeric equivalent of the character you want the literal to represent.

Listing 2-12 is a program showing character literals in action.

Figure 2-13 shows the results of this little program. 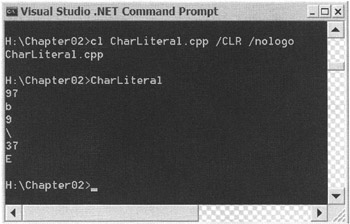 You can also create literal strings without a prefix, creating an unmanaged string literal or, when you prefix with the letter L, creating an unmanaged Unicode string literal. Both of these will work with Managed C++ but suffer in performance, as they have to get converted at runtime to managed Strings before they can be used with the String type.

By the way, the escape sequences shown previously also work within Strings. You must be careful to avoid too many characters after the backslash being taken as the escape sequence. Realistic examples of this are difficult with the Latin alphabet, but this illustrates the point:

Listing 2-13 is a program showing string literals in action.

Figure 2-14 shows the results of this little program. 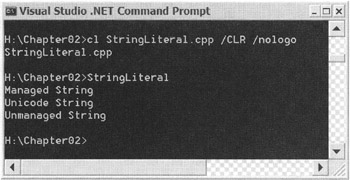