An IODSS is a DSS built on the extranets which can be executed over the Web to provide information, communication, and decision support tools in order to create and sustain the competitive advantages of all consortium members of industrial networks. Industrial networks (extended enterprise or integrated industry-wide system) electronically link multiple organizations in the same industry vertically (manufacturers, suppliers, and suppliers’ supplier) as well as horizontally (linking competing firms in an industry). Industrial networks enable the coordination of business processes across an industry vertically as well as horizontally.

The competitive advantages stem from cost leadership and product/service differentiation. To gain competitive advantage, the firm must cope with five competitive forces that determine industry profitability (Porter, 1985). The forces are the bargaining powers of buyers and suppliers, the threat of new entrants, and the threat of substitute of products or services. The extranets interlock trading partners so that the value chain can be created within and outside the organization. According to Porter (1985), “competitive advantage in one industry can be strongly enhanced by interrelationship with business units competing in related industries, if these interrelationships can actually be achieved” (p. 3). The electronic link created by extranets is a strong force that can most likely overcome the organizational impediment to creating those interrelationships.

“Web-based DSS” is a loosely defined term that refers to any DSS that can be executed over the Web, as shown in Figure 1. Web-based DSSs have reduced technological barriers and made it easier and less costly to make timely decisions on a global scale within geographically dispersed companies. The World Wide Web has become the client–server platform of many business organizations due to its network and platform independence and very low software/installation/ maintenance costs. Consequently, many organizations are using this global computer network-based DSS to overcome temporal, geographical, and technological barriers. According to Power (1998), the Web-based DSS has become a synonym for “organizational DSS” or “enterprise -wide DSS.” More groupware products are inextricably tied to Internet technology. Many groupware products are integrating more Internet protocols. As of 1999, more than 75 Web groupware products were available (Wheeler, Dennis, & Press, 1999). 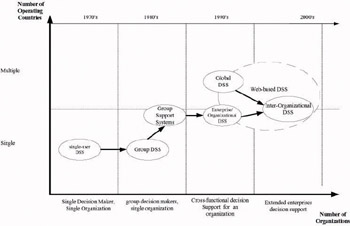 ERP and Data Warehousing in Organizations: Issues and Challenges
VBScript Programmers Reference
An Introduction to Design Patterns in C++ with Qt 4
Web Systems Design and Online Consumer Behavior
The Oracle Hackers Handbook: Hacking and Defending Oracle
VBScript in a Nutshell, 2nd Edition
flylib.com © 2008-2017.
If you may any questions please contact us: flylib@qtcs.net
Privacy policy
This website uses cookies. Click here to find out more.
Accept cookies