You are designing an infrastructure tier upon which an application will be deployed. Your operational requirements include availability or performance capabilities that cannot be met because either performance bottlenecks or single points of failure exist in your infrastructure.

How do you provide an infrastructure for your application that meets specific operational requirements such as availability and scalability?

Design your application infrastructure so that your servers appear to users and applications as virtual unified computing resources. One means by which to achieve this virtualization is by using a server cluster. A server cluster is the combination of two or more servers that are interconnected to appear as one, thus creating a virtual resource that enhances availability, scalability, or both.

Clustering servers might include the goal of increasing availability by ensuring that if a server becomes unavailable due to failure or planned downtime, another server in the cluster can assume the workload (see the Failover Cluster pattern). This type of clustering avoids loss of service to the users or applications that access the cluster and can occur transparently, without the users’ knowledge.

You can also use clustering to enhance scalability. Server clusters can support more users at the current level of performance or improve application performance for the current number of users by sharing the workload across multiple servers. A byproduct of clustering servers for scalability is that the additional redundancy of the multiple servers helps increase system availability, as mentioned earlier (see the Load-Balanced Cluster pattern). 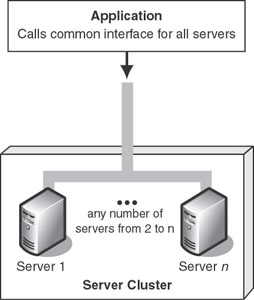 Figure 7.2 illustrates how server clustering can make two or more servers (Server 1 through Server n) appear as one virtual resource to a dependent application.

In asymmetric clusters, a standby server exists only to take over for another server in the event of failure. This type of cluster is usually used to provide high availability and scalability for read/write stores such as databases, messaging systems, and file and print services. If one of the nodes in a cluster becomes unavailable, due to either planned downtime for maintenance or unplanned downtime due to failure, another node takes over the function of the failed node.

The standby server performs no other useful work and is either as capable as or less capable than a primary server. A less capable, less expensive standby server is often used when primary servers are configured for high availability and fault tolerance with multiple redundant subsystems. One common type of asymmetric cluster is known as a failover cluster (see the Failover Cluster pattern). 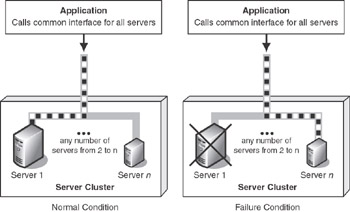 Figure 7.3 illustrates how an asymmetric cluster presents a virtual resource to an application. Under normal conditions, the primary server handles all requests. In the event of a failure, the standby server takes over handling all requests.

In symmetric clusters, every server in the cluster performs useful work. Typically, each server is the primary server for a particular set of applications. If one server fails, the remaining server continues to process its assigned set of applications as well as the applications on the failed server. Symmetric clusters are more cost-effective because they use more of the cluster’s resources more often; however, in the event of a failure, the additional load on the remaining servers could cause them to fail as well. 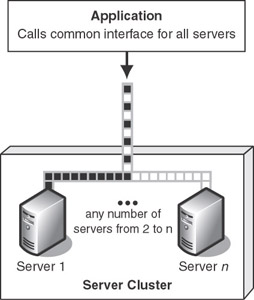 Figure 7.4 illustrates how a symmetric cluster presents a virtual resource to an application. Requests are divided among healthy servers to distribute load and increase scalability.

One common type of symmetric cluster is a load-balanced cluster (see the Load-Balanced Cluster pattern). Load-balanced clusters enhance the performance, availability, and scalability of services such as Web servers, media servers, VPN servers, and read-only stores by distributing requests across all of the healthy servers in the server cluster.

Server Clustering results in the following benefits and liabilities: