A good dimensional data warehouse has a simple database structure. Technically, a simple structure means faster queries. In a dimensional data warehouse, the implementation relational database has two types of tables, the fact table and the dimension table. The fact table consists of the facts (or measures) of the business. Dimension tables contain descriptions for querying the database.

The tables in a data warehouse are related such that the schema looks like a star, hence the term star schema.

Figure 1.1 shows a one-star dimensional schema of the sales order data warehouse we will develop in this book. 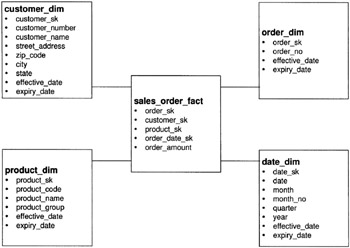 The lines connecting the sales_order_fact table to the four dimension tables in Figure 1.1 indicate the joins for querying the tables. These joins are on the dimension tables’ surrogate key columns.

Now that you already know the definitions of the star schema and the fact and dimension tables, let’s look at an example. Let’s say we’re interested in order amounts and decide that the order_amount column in the sales_order_fact table in Figure 1.1 is the measure. Table 1.1 contains a sample row from the sales order fact table.

Related dimensions that correspond to the data in Table 1.1 are given in Tables 1.2 to 1.5.