In every battle there comes a time when both sides consider themselves beaten, then he who continues the attack wins.

One should not deny or try to dodge the fact that the jury, in terms of market penetration, is still out when it comes to Web services ”even as we approach 2004. That is a sad and unexpected fact. This is not to say that Web services have not happened . Web services are available and are being used, albeit in the case of corporate deployments, primarily on an intranet/ extranet basis. But there are also publicly available Web services. These adhere to the original vision of the serve yourself software smorgasbord on the Web.

Google, for example, as shown in Figure 8.1, offers its much sought after search capability, now spanning in excess of 3 billion Web documents, as a SOAP and WSDL “compliant bona fide Web service. Then there is the Microsoft MapPoint Web Service ”often referred to in this book as a quintessential example. In addition, as shown in Figure 8.2, amazon.com, always at the forefront of Web-centric innovation, now offers the well-known capabilities of its site (e.g., collecting information about a set of products, whether it be books, CDs, or DVDs) in the form of bona fide, SOAP-based XML Web services. These three offerings, by chance, also happen to highlight another, much anticipated feature of Web services ”the programmatic delivery of functionality previously available only in interactive form. 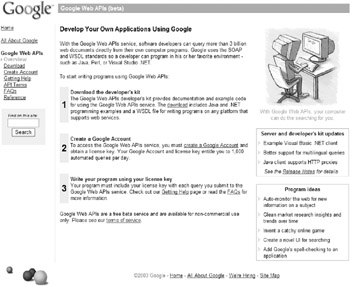 Figure 8.1: Google s much sought after search capability, now spanning in excess of 3 billion Web documents, is now available as a bona fide Web service that supports SOAP and WSDL. 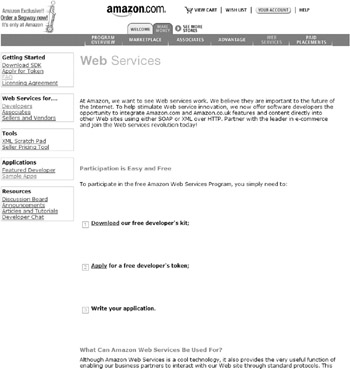 Figure 8.2: amazon.com, eager to stimulate interest in Web services and to promote its own powerful brand name , now offers the catalog, search, and e-commerce features of its redoubtable portal in the form of genuine XML Web services.

The problem with Web services has to do with expectations and predictions . Web services were touted as being the next big thing. This is true from a technological standpoint in that Web services represent a major breakthrough in self-defining, standards-based component technology. But the impact of Web services has yet to be felt by software developers on the whole or by the market in terms of more feature-packed applications.

Right now it all has to do with unfulfilled expectations. Web services are way behind schedule in regard to living up to their lofty expectations. During their inception in mid-2000, the computer industry as a whole had gushed, considerably more so than normal, about how Web services would revolutionize software, e-business, and the entire Web experience. Though it should be noted that these predictions were made during the exuberantly heady days when the NASDAQ was trying to defy gravity and logic, there was nonetheless considerable consensus that Web services were iconoclastic. The good news is that the potential is still there and that the apparent lethargy on the adoption front can be rationalized and justified.

There has been a global economic slowdown since early 2001. Hightech budgets have been particularly hard hit. After allocating funds lavishly for Y2K and Web enablement, senior corporate management understandably have felt obliged to rein in spending, determine the ROI of prior IT investments, and assess the fallout from the dot.com fiasco ” especially when they hear that all of the expensive, leading-edge networking gear that they leased a couple of years ago for millions of dollars is now readily available on eBay for 10 cents on the dollar! And that is without factoring in 9/ 11 and its impact on business around the world.

As 2003 winds down, the software and computer industry is still far from gaining any real traction on a road toward recovery. Sun, the keeper of Java and still a bellwether for strength of the e-business sector despite the corporate interest in Linux, is struggling to maintain revenue momentum and is laying off staff. BEA, a leader in Java application server technology and an aggressive promoter of Web services, also had to lay off staff as the third quarter came to an end. IBM laid off more people earlier in the year. By and large, enterprises around the world are not engaged in developing or acquiring new applications ”as had been hoped a few years ago. And it is not just high-tech and Web services that have faced these challenges. Over 200 restaurants have closed their doors in the greater San Francisco area alone since 9/11, and according to locals, the social and entertainment pulse of Manhattan, though it is now 2 years hence, is still not what it used to be.

Web services methodology, as one should always bear in mind, is also not a stand-alone technology. They are very much an enabling technology meant to simplify and expedite software development and reuse. Consequently, the fortunes of Web services are contingent on those of the software industry as a whole. Though Web services, particularly through the repackaging of the business logic contained in legacy applications, can make new application development that much more enticing, particularly in terms of overall costs, they cannot by themselves generate the demand within enterprises for new applications. And that is the rub.

Web services, through no fault of the technology (though some would argue, a tad irrelevantly, that a better job could have been done at the outset to allay security concerns), essentially got caught in a vicious industry-wide downdraft first created by the dot.com collapse and since exacerbated by 9/ 11, the unremitting security attacks on Windows servers, high unemployment in the United States, and the continuing fragility of the global financial markets. However, when the tide turns, hopefully by the third quarter of 2004, and the software market is rekindled, Web services, by then further bolstered by additional specifications covering security and management, are ideally poised to fulfill what most feel is their rightful destiny. This is the hope.