If you've installed RHEL 5 via kickstart or in text mode, the default Red Hat installation gives you just a single login account: root. You should set up some regular user accounts. You may have already done so through the First Boot process described in Chapter 2. Even if you're going to be the only user on the system, it's a good idea to create at least one nonadministrative account to do your day-to-day work. Then you can use the root account only when it's necessary to administer the system. Accounts can be added to Red Hat Enterprise Linux systems using various utilities, including application of the vi text editor (and related specialized commands) on password configuration files (the manual method), the useradd command (the command line method), and the Red Hat User Manager utility (the graphical method).

As discussed earlier, it's faster to log in as root (and not just the superuser). While you'll be doing most of the work on the Red Hat exams as root, it's quite possible that you'll be asked to create accounts for regular users (and groups) to configure a workstation.

There are three basic types of Linux user accounts: administrative (root), regular, and service. The administrative root account is automatically created when you install Linux, and it has administrative privileges for all services on your Linux computer. A cracker who has a chance to take control of this account can take full control of your system.

Nevertheless, it is sometimes appropriate to log in as an administrator (that is, as the root user), such as during most of the Red Hat exams. Red Hat Enterprise Linux builds in safeguards for root users. Log in as the root user, and then run the alias command. You'll see entries such as this,

which prompt for confirmation before the rm command deletes a file. Unfortunately, a command such as rm -rf directoryname supersedes this safety setting.

Regular users have the necessary privileges to perform standard tasks on a Linux computer. They can access programs such as word processors, databases, and Web browsers. They can store files in their own home directories. Since regular users do not normally have administrative privileges, they cannot accidentally delete critical operating system configuration files. You can assign a regular account to most users, safe in the knowledge that they can't disrupt your system with the privileges they have on that account.

Services such as Apache, Squid, mail, games, and printing have their own individual service accounts. These accounts exist to allow each of these services to interact with your computer. Normally, you won't need to change any service account, but if you see that someone has logged in through one of these accounts, be wary. Someone may have broken into your system.

There are two basic ways to add users through the command line interface. You can add users directly by editing the /etc/passwd file in a text editor such as vi. Alternatively, you can use text commands customized for the purpose.

Open the /etc/passwd file in the text editor of your choice. If you choose to open it in the vi editor, you can do so with the vipw command. If you've added regular users to your system, you'll normally see them listed at the bottom of this file. Scroll around this file, and you should see a series of lines like the following:

Each column in /etc/passwd, delineated by a colon, has a purpose, which is described in Table 6-1.

You can create a new user in /etc/passwd by copying and then editing a line associated with an existing user. Just substitute the information of your choice to create the new user. Make sure that you at least assign a new username and user ID.

Adding Users to a Group

Every Linux user is assigned to a group. By default in RHEL 5, every user gets his own private group. The user is the only member of that group, as defined in the /etc/ group configuration file. Open that file in the editor of your choice. If want to use the vi editor, use the vipw command. You should see lines similar to the following:

The contents are straightforward. The users mj and vp are members of their own groups as well as the managers group. The four columns in each /etc/group line are described in Table 6-2.

Adding Users at the Command Line

Alternatively, you can automate this process with the useradd command. If you wanted to add a new user named pm, you could just type useradd pm to add this user to the /etc/passwd file. By default, it creates a home directory, /home/pm; adds the standard files from the /etc/skel directory; and assigns the default shell, /bin/bash. But useradd is versatile. It includes a number of command options shown in Table 6-3.

You can now use the passwd username command to assign a new password to that user. For example, the passwd pm command lets you assign a new password to user pm. You're prompted to enter a password twice. RHEL is configured to discourage passwords that are based on dictionary words or that are shorter than six characters for security reasons. Nevertheless, such passwords are legal, and such a password is accepted by the passwd command when you type it in a second time.

As of this writing, the Red Hat User Manager can be run only from the Linux GUI. If you're running a command line console and have installed the needed software, the startx command moves you into the GUI. The default GNOME desktop is shown here. 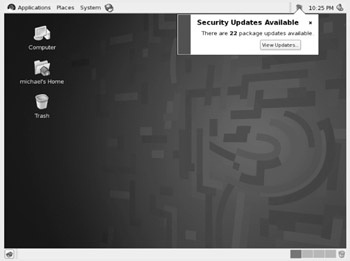 The look of the alternative KDE desktop is slightly closer to that of Microsoft Windows; if you're using KDE, pay attention to the icon of the Red Hat Fedora in the lower-left corner of the desktop; it starts program menus similar to those associated with the Microsoft Windows Start button. When referring to the KDE desktop shown next, I'll refer to it as the Main Menu button. 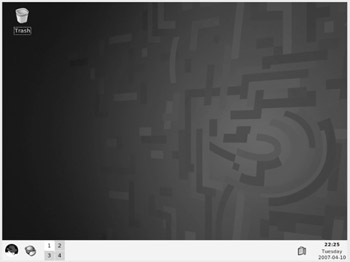 Now from the Linux GUI, you can start the Red Hat User Manager in one of three ways: Enter system-config-users from a command line interface in the GUI, choose System | Administration | Users and Groups in GNOME, or choose Main Menu | Administration | Users and Groups in KDE. The next screen shows the Red Hat User Manager window. 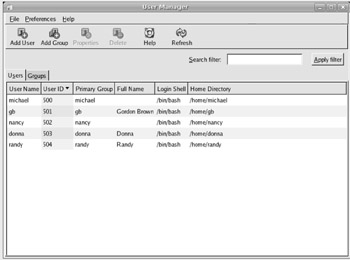 Exercise 6-1: Adding a User with the Red Hat User Manager

To add a user with the Red Hat User Manager, open it. If it isn't already open, press ALT-F2. Type system-config-users in the text box that appears.

Although creating user accounts may seem to be a straightforward process, there are a few things to consider when configuring new users:

This is a lot faster than the GUI method, for which you start the X Window System, open the Red Hat User Manager, select the user, and then click Delete. While it's probably easier for a less experienced user to remember the GUI method, text commands are faster.

If you know both the text and GUI tools to perform a task, use the text method. It almost always saves time.

Click the Account Info tab for the account expiration information shown in Figure 6-1. As shown in the figure, you can limit the life of an account so that it expires on a specific date, or you can disable an account by locking it. 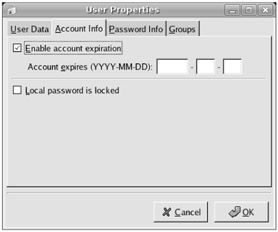 Click the Password Info tab. As shown in Figure 6-2, you can set several characteristics related to an individual user's password. Even when you set good passwords, frequent password changes can help provide additional security. The categories shown in the figure are self-explanatory; a 0 in any of these text boxes means that the limit does not apply. 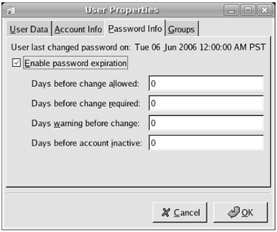 Click the Groups tab. Users can belong to more than one group in Linux. Under the Groups properties tab shown in Figure 6-3, you can assign the target user to other groups. For example, if you want to collect the files supporting the managers in your company into one directory, you can assign appropriate users to the group named managers. Alternatively, you can then assign members of that project team to the project group through the Groups tab. 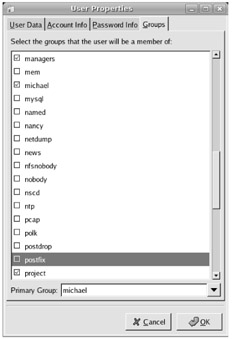 You may not have access to a GUI during the Troubleshooting portion of either Red Hat exam. Therefore, you need to know how to manage users independent of GUI tools such as the Red Hat User Manager. In any case, text-based tools are almost always faster.

While the Red Hat User Manager GUI utility is convenient, it's often faster to perform the associated administrative functions at the command line interface. I've described some of these commands such as useradd and userdel. Two other key user administration commands are usermod and chage.

The usermod command modifies various settings in /etc/passwd. It also allows you to set an expiration date for an account or an additional group. For example, the following command sets the account associated with user test1 to expire on June 8, 2007:

The following command makes user test1 a member of the special group:

You can use the chage command to manage the expiration date of a password. Password aging information is stored in the /etc/shadow file. In order, the columns in /etc/shadow are shown in Table 6-4. The associated chage switch, where available, is shown with each description entry. For example, if you wanted to require that user test1 keep a password for at least two days, use the chage test1 -m 2 command.

As described earlier, I recommended that you use the root account during the Red Hat exams. However, I assume you still need to configure Linux computers in real life. One security measure that can help is to limit regular users who can access the root account via the su command. This takes two basic steps.

First, you'll need to add the users who you want to allow access to the su command. Make them a part of the wheel group. By default, this line in /etc/group looks like:

You can add the users of your choice to the end of this line directly, with the usermod -G wheel username command, or with the Red Hat User Manager.

Next, you'll need to make your Pluggable Authentication Modules (PAM) look for this group. You can do so by activating the following command in your /etc/pam.d/ su file:

You'll learn more about how this works later in this chapter.

Alternatively, you can limit access to the sudo command. Regular users who are authorized in /etc/sudoers can access administrative commands with their own password. You don't need to give out the administrative password to everyone who thinks they know as much as you do about Linux.

To access /etc/sudoers in the vi editor, run the visudo command. From the following directive, the root user is allowed full access to administrative commands:

For example, if you want to allow user boris full administrative access, add the following directive to /etc/sudoers:

In this case, all boris needs to do to run an administrative command such as starting the vsFTPd service from his regular account is to run the following command, entering his own user password (note the regular user prompt, $):

But you don't have to allow full administrative access. For example, if you want to allow those in the %users group to shut down the local system, you can activate the following directive: