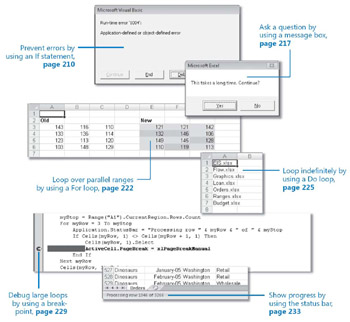 The first successful underwater tunnel ever built was begun in 1825. It is the Thames Tunnel. It was a financial disaster at the time, but amazingly it is still in use as part of the London Underground system. The genius behind the the tunnel’s engineering was a man named Marc Brunel. Twenty years before launching the Thames Tunnel, Brunel made a name for himself by devising a way of inexpensively producing the pulley blocks needed to build ships for the British shipping industry. Brunel’s technique later came to be known as an “assembly line,” and Henry Ford turned the invention into an industry, supplying America with Model T cars that cost only $3,500 in today’s dollars.

Repetition can have a dramatic effect on efficiency. Computer programs-including macros that you write-become more powerful when you add a multiplier effect. In this chapter, you’ll learn how to add loops to your macros. And to make those loops more effective, you’ll learn how to create conditional expressions that let the macro make decisions.