Being able to control printed output is a natural concern. After all, you must be able to send it to the proper printer, make sure it uses the right type of forms, and so on. i5/OS provides a number of commands that let you do precisely that.

Before getting too far into the different tasks you can perform to control printer output, you should become familiar with at least two commands that present lists of reports as they exist in output queues. The two commands are:

Redirecting to a Specific Printer

A report can be redirected to a specific printer at three different times:

To specify a printer at any of these times, you must execute the Change Spool File Attributes (CHGSPLFA) command to indicate the name of the new printer in the DEV parameter. To run the CHGSPLFA command successfully, you must give it the following information:

Running CHGSPLFA manually is quite a challenge, because you probably would not have all the information required to run CHGSPLFA successfully.

Executing CHGSPLFA manually from the command line is too tedious and prone to error. It is far easier to run it as an option 2 from any of the list panels presented by the WRKXXX commands, such as WRKSPLF or WRKOUTQ. When you select option 2, the system fills out the FILE, JOB, and SPLNBR parameters for you. If the job has started but the report hasn't been produced yet, you must begin by running the Work with User Jobs (WRKUSRJOB) command and supplying the name of the user who started the job. This user may have more than one job started, so you need to find the job that will produce the report. When you find it, select option 2 to change the job, press Enter, and find the parameter that changes the printer that will print the report. Type the printer name and press Enter.

If the report has been generated, but has not started printing, use WRKOUTQ or WRKSPLF to find the report and key in option 2. When you press Enter, you will be able to change the printer name.

Reports don't always have to be printed. Many times, the user who requested it only needs to look at the last page to check some bottom totals, or she wants to verify the report before printing it.

i5/OS makes it easy to display a report. Use WRKOUTQ or WRKSPLF to find the report, then key in option 5 to run the Display Spooled File (DSPSPLF) command, which is shown in Figure 5.3.

The Control field lets you shift the display window so that it begins on any given column. When you display the report (which runs the DSPSPLF command), the system shows the window with column 1 on the left margin of the window. If you are using an 80-column display, you won't be able to see all of it. Even 132-column displays are limited if the report is printed using more than 132 columns. Use the ‘W’ (window) command to shift the starting position for the column. To shift the window so it begins with column 41 on the left margin, for example, key in W41 and press Enter.

Other commands let you advance or move back through the window by a certain number of lines. For example, ‘-12’ takes you back 12 lines, and ‘+80’ moves you forward 80 lines. You can always display help information by placing the cursor on the control field and pressing the Help key.

The Find field is easy to use. Key in the string of characters you want to scan for and press F16 to scan. Each time you press F16, the scan resumes. This summary can continue until you reach the end of the report. You must enter alphabetic characters in the proper cases, because the scan is case-sensitive.

You have already seen how to change a report so that it is redirected to a different printer. You can change many other attributes of a report. (Some attributes are unchangeable, however, such as the number of lines per page or the number of characters per inch.)

The process of changing report attributes is the same regardless of which attribute you want to change: Find the report first, then key in option 2 to change it. If the report is already printing, you will have to hold it first using option 3, and release it using option 6 after you have changed it.

Suppose you want to change the form type of a report (which you have already found) from *STD to *NCR2 (two-part NCR carbonless paper). Key in option 2 and roll the panel presented until you reach the form type prompt, as shown in Figure 5.4. 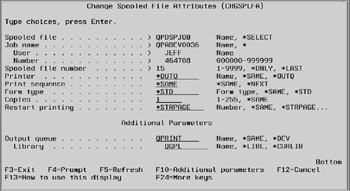 Key in *NCR 2 in lieu of *STD and press Enter; the report is then changed. This process can be tedious if several (or many) reports must be changed the same way. You can take a shortcut from either the WRKOUTQ or WRKSPLF panels: In option 2 for each report you want to change (they can be in different "pages" of the panel), move the cursor to the command line, type FORMTYPE(*NCR 2), and press Enter. See Figure 5.5. 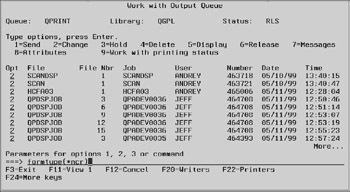 Figure 5.5: Changing the form type of numerous spooled files at once.

All reports you marked with option 2 are changed at once.

This shortcut works because option 2 executes the CHGSPLFA command. The parameter to change the form type is FORMTYPE. You can change more than one attribute at the same time, for more than one report, using the same technique. For example, if you had to change not only the form type, but also the number of copies to 3, key in option 2 for each report, type FORMTYPE (*NCR 2) COPIES (3) at the command line and press Enter.

There are times when a user requests a report and then decides it isn't needed, or when the system generates some printed output that you do not want. In these cases, you must delete the reports. You can do that using the Delete Spool File (DLTSPLF) command. It is much easier, however, to use option 4 from either WRKOUTQ or WRKSPLF.

When you key in option 4 and press Enter, the system first asks you to confirm your intentions with the panel shown in Figure 5.6. 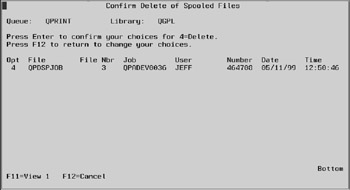 You might have entered a 4 by mistake (maybe you wanted a 5 to display the report), or you might have placed the 4 next to the wrong report. If you change your mind, press F12 to cancel your delete request. If you want to continue, press Enter again.

If you want to make sure that a report doesn't print, but you do not want to delete it, you can hold it. The report will stay in the output queue, on hold, until it is released and printed or until someone deletes it.

To hold a report, you must run the Hold Spool File (HLDSPLF) command, or key in option 3 from either the WRKOUTQ or WRKSPLF command panel.

To release the report, run the Release Spool File (RLSSPLF) command, or key in option 6 from either of the panels mentioned above. Once released, the report becomes eligible for printing again, and it will start printing at the first page according to the PAGERANGE parameter.

Printing Part of a Report

Once released, the report begins printing at the top of the page you specified in the second step.

Interprocess Communications in Linux: The Nooks and Crannies
The .NET Developers Guide to Directory Services Programming
WebLogic: The Definitive Guide
C++ How to Program (5th Edition)
Persuasive Technology: Using Computers to Change What We Think and Do (Interactive Technologies)
FileMaker 8 Functions and Scripts Desk Reference
flylib.com © 2008-2017.
If you may any questions please contact us: flylib@qtcs.net
Privacy policy
This website uses cookies. Click here to find out more.
Accept cookies