With Oracle 8i, in addition to defining primary-foreign-key relationships among tables, you can also describe the relationships between the columns within one or more tables by creating a new schema object, called a dimension. Telling Oracle about such relationships in the data makes it possible for the advisor to recommend the best set of summaries to create, for the optimizer to rewrite more queries to use the summaries, and for the OLAP tools to perform rollup and drill-down operations. We will see the power of dimensions in the section 4.6, where we talk about query rewrite.

Typically, relationships between fact and dimension tables are specified using referential integrity constraints. Dimensions are used to define the following types of relationships:

Once the tables that contain the dimension data is created, you can create the DIMENSION object, using the CREATE DIMENSION statement. It helps to draw a bubble diagram showing the hierarchical relationships among the columns prior to defining a dimension.

To convert the bubble diagram in Figure 4.6 into a dimension definition, each bubble in the diagram becomes a LEVEL in the hierarchy, as shown in the following CREATE DIMENSION statement.

4.5.2 Defining a dimension with multiple hierarchies

Figure 4.7 shows the bubble diagram for the time dimension. It contains two hierarchies, describing the different ways the time_key can be rolled up. Each arrow coming out of a bubble is described as a CHILD OF clause. Since there are two arrows coming out of the time_key bubble, there are two CHILD OF statements—one in each hierarchy. From a given date, one hierarchy tells us which week and fiscal quarter this date is in and the other tells us the month and year. At the top of every bubble diagram is the special level "ALL," representing the grand total level for that dimension. All levels of a hierarchy can be rolled up to ALL. We don't explicitly define the ALL level in the CREATE DIMENSION statement. 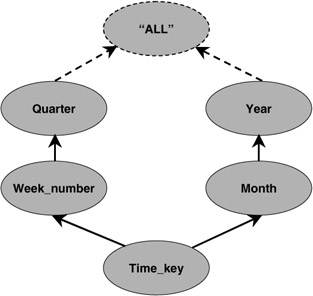 The following SQL segment is an example of a dimension with multiple hierarchies.

Again, for each value of a child column in a hierarchy, there is only one parent value. Any given date, say March 21, 2002 falls into one, and only one fiscal week_number and in a specific quarter.

4.5.3 Defining a dimension with attributes

Dimensions can be used to define relationships between columns within the same table that are not part of the hierarchy. Often users do not know the unique identifier for a record but know the name. For example, a customer may not know the product_id, but does know the product_name of what he or she is interested in purchasing. In relational database theory these relationships are called functional dependencies, or one-to-one relationships. A functional dependency from column A to B means that for every value of A, there is only one value of B. So if you know the value of A, then you can determine the value of B.

4.5.4 Defining a dimension with normalized tables

If you have a snowflake or other normalized schema, then your hierarchy may refer to columns in multiple tables. The dimension statement in Oracle allows you to declare such relationships as well.

Figure 4.8 shows a normalized time dimension. The bubbles and bold arrows define the rollup relationships as before. The dotted rectangles represent the tables where the levels come from. The dotted arrows show how the tables join to each other. In this example, there are separate tables for time, week, month, quarter, and year. The time table joins to the week table using the predicate time.week = week.week_number and to the month table using the predicate time.month = month.month. 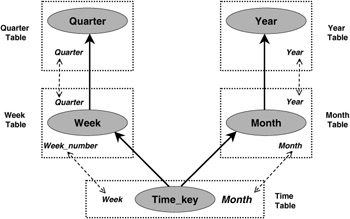 To convert this diagram to a CREATE DIMENSION statement, you would first define a level for each of the bubbles, specifying both the table name and column name for that level. For example, the level week is week.week_number. Next you would define your hierarchy using the level names as before. Finally, you would specify any joins that must be performed when traversing up the hierarchy using the JOIN KEY clause. Thus you would get the following CREATE DIMENSION statement:

In the fiscal_rollup hierarchy in this example, the JOIN KEY time.week column is used to join the time table to the week level.

As discussed in Chapter 2, normalized dimension tables incur the overhead of extra joins during query processing and hence must be used with care.

We have said that the relationships declared by the dimension object are not automatically checked by Oracle. In order to get accurate results with query rewrite, you must ensure that these relationships hold in your data. To help with this, Oracle provides a procedure known as DBMS_OLAP.VALIDATE_DIMENSION. You can run this procedure every time new data is loaded into your dimension tables to ensure data integrity.

For example, suppose we had the following customer dimension:

According to this dimension, town determines the postal_code, and every town should fall in one, and only one, county. Let us check that this is indeed the case.

Now suppose some bad data got inserted into the customer table. The postal code for London was mistyped as W1 2QC and the town of Liver-pool was misclassified in the Hants county.

If we run VALIDATE_DIMENSION, it will detect that there is a discrepancy in the HIERARCHY and ATTRIBUTE relationships declared by the customer_dim dimension.

The VALIDATE_DIMENSION procedure will verify the integrity of the data and place any exceptions found in the MVIEW_EXCEPTIONS table.

The bad_rowid column of MVIEW_EXCEPTIONS gives the table rowids with the discrepancy (i.e., all rows corresponding to the violated relationship). In our example, it would return all rows corresponding to the towns of London and Liverpool. We can now look at the actual data values by looking up the customer table, as follows. We can see that customer_ids AB130000 and AB130001 have mismatched values for town, postal_code, and county with respect to the remaining data.

In the next section, we will look at how query rewrite can be used to transparently rewrite queries with materialized views. We will also see how dimension objects are used.