No wonder Ann Gessen's internal memo to her manager at Metaphor Computer Systems is typical of every seller's first date with Consultative Selling:

I presented my first Profit Improvement Proposal yesterday—a preliminary PIP to a senior VP of operations to get his feedback before formally presenting to him and the other senior managers next week. He went nuts! "This stuff is great. I can't believe it. Your company is finally doing something right by relating to me as a business manager. I came in here dreading that you were going to give me a standard price-performance pitch. What a relief!" At that moment, all I wanted to do was to kiss Mack Hanan.

If Ann Gessen had been a vendor instead of a consultative seller, her customer would never have been able to share the opportunity she represented to make his operation more competitive. Only his dread, not his profits, would have been realized. Ann would have presented him with a "discussion document" or a "concept presentation," two forms of confessions of ignorance about the relationship of her customer's business and her own. Or, even more demeaning, she would have tried to sell him a "study." Discounting is the name of the luxury tax she would have had to pay for the enjoyment of her ignorance.

is the original value proposition. All proposals that sell on ROI (return on investment) or that use a Cost-Benefit Analysis spreadsheet are derived from the PIP.

PIPs are conversion machines. They convert the operating benefits of a suppliers' technology into financial benefits for their customers. Because technology is supplier specific while financial benefits are the universal language of business, customer managers can immediately perceive what even the most exotic technology can contribute to their competitiveness in terms of saved operating costs and increased earnings from operations.

In both of these respects, PIPs affect customers' variables: their variable costs and the elasticity of their revenues. PIP time frames are short term, circulating customers' capital fast and recirculating it as soon as possible through continuous PIPping.

PIPs measure their incremental value in dollars. As part of their conversion mechanism, they translate time into money.

Similarly, they monetize reduced labor intensity and increased manufacturing productivity. Customers' pounds of weight saved or the number of extra cases, gallons, or carloads shipped become their money equivalents in a PIP.

While PIPs are generally targeted to the improvement of profit contributions made by customers' tangible assets, PIPping works every bit as well with the intangibles. Dell Computer's build-to-order assembly system is regarded by consultative sellers as a cost reducer; they ask how its already low current costs can be further reduced. Wal-Mart's supply chain management system is also a cost reducer, showing up as everyday low prices in its stores. Consultative sellers ask how improved productivity in managing the chain of suppliers can yield an even lower cost base and thereby generate greater revenues.

The critical-to-success Internet management skills of amazon.com are revenue generators to consultative sellers, who set about to increase their moneymaking capabilities.

Consultative Selling makes more money for you than vending because it generates new high-margin sales volume that vending would never have been able to bring in. These incremental flows of new cash dollars into your business have a greater net worth to you because they can be achieved at lower selling costs than vending.

Vending ignorance ends and Consultative Selling wisdom begins when sales representatives put their first Profit Improvement Proposal—in front of a customer manager and begin to sharpen up the PIP's problem or opportunity diagnosis, firm up its prescription for an optimal solution, and close the proposal by going upstairs for funds.

Consultative Selling's three strategies of positioning you as a value-adder, proposing the financial value you can add, and partnering with a customer manager to comanage the realization of the value are designed to take you through the PIP cycle in minimal time with a maximum hit ratio. If you use PIPWARE

software[1]—the Profit Improvement Proposal on a Disc—you cut your time outlay even more. The minimal time to complete a PIP is less than a minute. Each additional iteration takes another sixty seconds.

When you partner with a customer manager through the intermediary of a Profit Improvement Proposal in PIPWARE form, your proposal is no longer yours alone. Realtime customer inputs make it "ours," a partnered business case in which the customer becomes preinvested in the joint creation of the solution as the first step to his or her investment in its funding. As a result, the hit ratio from PIPping is almost always one to one. Why not? With your help, customers end up proposing to themselves.

Mosaix is a manager of customer telecommunications services. "For many years," its people say, "Mosaix won deals with superior technology. Our salespeople focused on selling product—great product, but product. We got into pricing wars. We claimed technological superiority. Competitors claimed technological superiority. Customers were confused. Our win rate declined to one win in ten bids."

Realization dawned: compete on value, by making positive contributions to reduce customer costs and improve revenues. Mosaix experimented with Consultative Selling. "The performance of our consultative sellers eclipsed the product sellers with eight high-margin wins out of every ten."

In addition to preserving margins and increasing the win rate, Consultative Selling proved to have another advantage for Mosaix. "It kept out competitors."

The advent of Consultative Selling made vending on price and performance the default strategy for B2B (business to business) sales. Product-centered selling was left to suppliers who did not know their applied value and so could not price or sell it. It remained as the fallback for suppliers who were content to sell commodities instead of brands, who believed that they could make up for discounted margins by more and more volume, and who were dedicated to killing their competitors rather than creating killer apps to grow their customers.

Consultative Selling's critical success factor is its ability to free price from cost and competition by relating price to an investment. In this way, it can be compared to the value of new profits that are to be improved by the seller—in other words, it can be compared to its return instead of to its cost or performance.

By altering the unit of sale from a product to an improvement in profits, Consultative Selling changes the basis on which sales are made. All sales are the result of comparison. Vendor sales compare competitive products on the basis of their price and performance. Consultative sellers compare a customer's current operating performance with a future improvement. They differentiate themselves by selling the difference.

In this way, Consultative Selling enables account managers to pull off the "hat trick" of selling:

Initially conceived as a sales strategy, Consultative Selling has changed the terms and conditions of competition, the supplier relationships of customers, and the organization structures of the companies that practice it: not just in expected operations such as marketing support and customer input into R&D (research and development), but also in the forms of virtual organizations with spun-out or outsourced sales forces and the two-tier sales force model with a top tier composed of consultative sellers dedicated to key account customers and a bottom tier of third-party resellers, telemarketers, and retailers.

Outsourcing, facility management and category management, networking, systems integration, and process re-engineering would all be impossible to propose, evaluate, or finance without Consultative Selling.

As the contact point between suppliers and customers or providers and clients moves up the value chain from seller-buyer to comanager-manager, consultative sellers alone, of all supplier people, possess the mindset and skillset necessary to oversee their mutual growth. They are their customers' and clients' natural growth partners. As a result, they are their own companies' natural developers of continuous new streams of profitable sales volume.

With the advance of Consultative Selling into the next generation of business, consultative sellers are becoming the sole survivors of direct sales forces. Who needs vendors when all they do is discount price? Who can afford vendors when they add more to the cost of sales than they recover in margins? Who can justify vendors when customers publish requests for proposals on their Web sites or fax RFPs, circumventing human contact? And whom do vendors call on as customers outsource and downsize their purchasing functions?

Figure P-2 shows the advance of Consultative Selling as vendor sales forces are retrained to sell consultatively or are replaced by third-party resellers, telemarketers, cataloguers, and Internetters. From now on, the rule is clear: Whenever a human being adds his or her cost of labor to the sales process, only Consultative Selling can add back the value to pay for it and still make a profit. 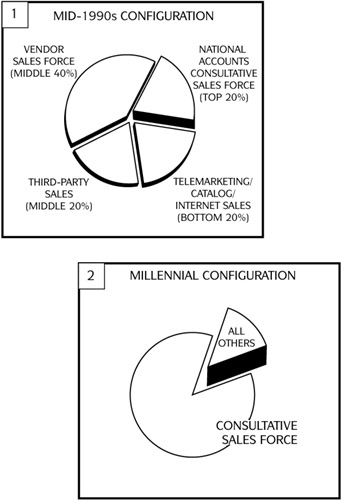 Consultative Selling was created to be the ultimate expression of one-to-one marketing: one Profit Improvement Proposal for an improved profit contribution by one application to one operation of one customer manager by one sales representative. Each PIP is one of a kind. It is application-specific, operation-specific in a specific industry, and customer manager-specific in its enhancement of one of the key performance indicators. It is also sales rep-specific. It comes out of each rep's individual mindset. Except by chance, no one else is likely to diagnose a customer problem or opportunity in exactly the same way, prescribe exactly the same return on the same investment within the same time frame. As much as Consultative Selling is single-customer marketing, it is also single-rep selling.

Consultative sellers who are doing their job should be able to point to improvements in customer operations to which their specific PIPs have been contributing:

In this way, Consultative Selling stands alone in contrast to the commoditization of products, services, and people in vendor selling. Suppliers and providers are branded by the differentiations of their PIPs. So are their customers. And so are their sales representatives and account managers, who become known by the contributions they make to the outcomes they affect.

are registered trademarks of the author. PIPWARE is the computer software that enables the Internet- and corporate intranet-accessible Consultative Selling e•xpert xystem