An excellent use for a variable is to hold information in your macro that has been entered by the user. One way to manage this input is to use special Visual Basic keywords called functions that perform useful work and then return important values to the macro. In this section, you'll learn how to use the InputBox and MsgBox functions to manage input and output in an Office document, and how to use arguments to pass information to a function.

Using a Variable to Store Input

The InputBox function is designed as a simple way to receive input from the user and store it temporarily in a variable. In the following example, you'll enhance the CenterHeading macro by adding a dialog box that prompts the user for the name of a new heading. You'll also learn how to make a procedure call in a macro.

ON THE WEB The InsertHead macro is located in the Chap59 document on the Running Office 2000 Reader's Corner page.

This time you're declaring two variables by using the Dim statement: Prompt and Heading. The second line in the event procedure assigns a group of characters, or a text string, to the Prompt variable. The macro then uses this message as a text argument for the InputBox function. (An argument is a value or expression passed to a sub procedure or a function.)

The next line calls (runs) the InputBox function and assigns the result of the execution— the text string the user enters— to the Heading variable. InputBox is a special Visual Basic function that displays a dialog box on the screen and prompts the user for input. In addition to supporting a prompt string, the InputBox function supports other arguments that you might want to use occasionally. Consult the Visual Basic online Help for details.

After InputBox has returned a text string to the macro, the fourth statement in the procedure changes the font size to 16 points (suitable for a heading), and the fifth statement inserts the text into your document using the TypeText method.

NOTE If you want to call one procedure from another procedure, you must place the procedures in the same module or declare the called procedure in a module that is in the current project or in the Normal.dot template. Otherwise, Visual Basic won't be able to find the procedure name you specify. 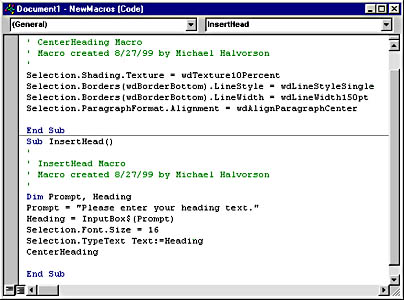 Now run the InsertHead macro in your Word document to try out the InputBox function and your two variables. Follow these steps:

What Are Arguments?
As you learned using InputBox, Visual Basic functions often use one or more arguments to define their activities. For example, the InputBox function used the Prompt variable as an argument to display dialog box instructions for the user. When a function uses one or more arguments, the arguments are separated by commas, and the whole group of arguments is enclosed in parentheses. The following statement shows a function call that has two arguments:

Using a Variable for Output

The syntax for the MsgBox function is:

The following items are important:

TIP In Visual Basic syntax listings, items in italic type are placeholders for variables or other values in your program code. By convention, programmers use italic to highlight the parts of program syntax that you need to customize with your own instructions. (You'll also see the convention in the Visual Basic online Help.)

If you're just displaying a message in MsgBox, the assignment operator (=), the ButtonClicked variable, and the ButtonStyle argument are optional. You won't be using these in the following exercise; for more information about them, search for "MsgBox" in the Visual Basic online Help.

In the following exercise, you'll use a MsgBox function to display the user name associated with your copy of Word. This name is stored on the User Information tab in the Options dialog box, and you can modify it by using the Options command on the Word Tools menu. Word places the registered user name in comments and revision annotations, so it's a good idea to check this setting periodically using a macro.

ON THE WEB The DisplayUser macro is located in the Chap59 document on the Running Office 2000 Reader's Corner page.

Often you'll find it handy to display a status message about a document by using a macro. Follow these steps to create a macro that displays information about the registered user:

The first statement declares a variable to hold some descriptive text for the MsgBox function. The second statement assigns a text value to the variable. The third statement displays a message box on the screen and places the contents of the DialogTitle variable in the title bar. The UserName property of the Application object is then placed inside the message box. (When you don't use the ButtonClicked variable with MsgBox, the parentheses go around only the first argument.)

Now run the DisplayUser macro in your Word document to try out the MsgBox function. Follow these steps: