Keyboards are also crucial devices in the vast majority of computers. Keyboards can be had for under five dollars, and for several hundred dollars. Keyboards come in versions for different languages. There are Dvorak keyboards, which have the alphabet laid out in a pattern conducive to faster typing than the QWERTY type, which was designed for old typewriters to keep the typebars from jamming. Some keyboards come with features such as ergonomic shapes or built-in touchpads. Some have extra buttons used for turning the computer on and off, connecting to the Internet, controlling audio CDs, or opening any program designated by the user.

Not everyone is familiar with all the keys on a keyboard, so an explanation of some of the lesser-known keys follows.

There are four main interfaces for keyboards:

There is one overriding rule that must be followed when cleaning a keyboard: don't let it get wet! Keys and the body of the keyboard can be cleaned with a slightly damp cloth, but don't let water get underneath the keys. The most common damage that occurs to keyboards is when someone spills liquid into them. Air sprays such as Blow Off are great for removing dust. Sprays are available to clean the surfaces of keyboards; make sure they are designed specifically for computer keyboards.

What little configuration that can be done for the main functions of a keyboard can be done in the Keyboard applet in Control Panel. Figures 9.6 and 9.7 shows a typical Keyboard applet from Windows 2000. As with pointing devices, it is helpful to be familiar with these settings. 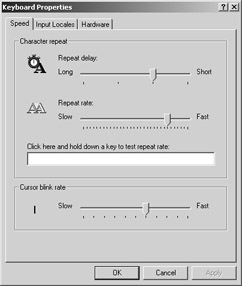 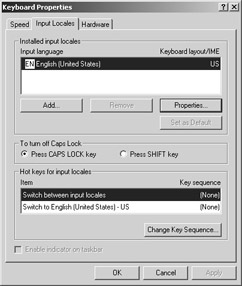 Figure 9.7: Input Locales page of the Keyboard applet in Windows 2000.

Keyboards are generally trouble-free unless subjected to liquids or physical shock. If a broken keyboard is an inexpensive model, it is probably best to replace it. The cost to replace the unit is usually lower than the value of the time it takes to attempt to fix one. That being said, some keyboards are more expensive, some are no longer available, and some users are "attached" to their keyboards. If you have a situation like this, disassemble the keyboard, if possible, and carefully clean the internal components inside. Then, reassemble the keyboard and try it out. If you are careful, you are unlikely to cause any further damage, and hopefully you can fix the problem. If a liquid has spilled into the keyboard, you should spray the non-residual contact cleaner on the surfaces under the keys. Use cotton swabs to clean the surfaces. This cleaning spray is expensive; expect to use up to $10 worth cleaning one keyboard.

The only error message you're likely to encounter is the six-beep (usually) POST code indicating a keyboard or keyboard controller problem. If this happens, and replacing the keyboard doesn't help, unless the motherboard is under warranty, your only solution will be to use a USB keyboard if the computer has a USB port. If not, it is probably time to retire the motherboard.

Laptop keyboards are essential to the portability of a laptop. Imagine trying to tote a laptop or use one on a plane if you have to use a separate keyboard. The most common reason to have to replace a laptop keyboard is if liquid spills on it, but the rest of the machine still works. Laptops vary widely in how to remove the keyboard, and laptop manufacturers vary widely in providing such information. For example, IBM® makes detailed service instructions for its ThinkPad® laptops available on its Web page (ibm.com), while many other companies do not make this information available on the Web. There are two common ways to remove a laptop keyboard. One is, with the power off and battery removed, to look for a removable panel around the keyboard. There might be a screw or two holding it in place (see Figure 9.8). 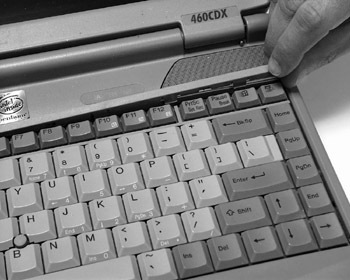 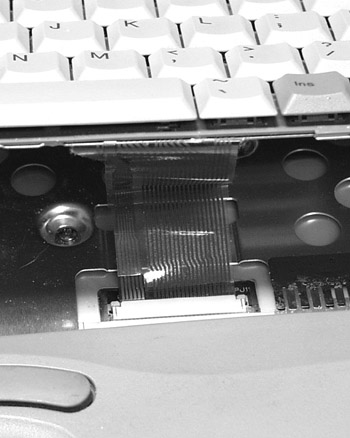 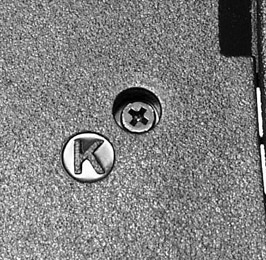