This chapter talked about a lot of post-screen shaders and covered almost every basic post-screen shader that exists, and you learned about the basic components to write similar shaders. For example, the color correction shader can be used to achieve sepia effects like in Figure 8-1. One shader I left out intentionally is the edge detection shader. It may not be useful for every single game, but there are a lot of other shaders that use the basic functionality of an edge detection shader. Here are some examples:

All you have to do is to create a simple edge detection filter. The basic idea is here to take several pixels from the original scene map and compare them with the neighboring pixels. In Shader Model 1.1 you can only take four texture inputs, and in Shader Model 2.0 only eight, therefore you are limited on how many pixels you can use in the Pixel Shader. Doing comparisons is also not that easy and not a good thing for Pixel Shader 1.1. Instead just take a center point, multiply it by 2, and then subtract two surrounding points (top and bottom, and left and right). Then take the gray-scale value with the help of the Luminance function of the result and you have your edges.

The following is the basic Pixel Shader code; if you are in Shader Model 2.0 you can do even more texture fetches. If you are unsure how to extend the shader please check out the edge detection shader of Nvidia’s FX Composer. You should try to develop the whole shader in FX Composer anyway and then you can work on a C# class if you want to import it into your engine. The variables col1, col2, col3, and col4 are four colors from the scene map through four texture coordinates you passed to the Pixel Shader.

If you managed to get your shader to work you should see something similar to Figure 8-24. 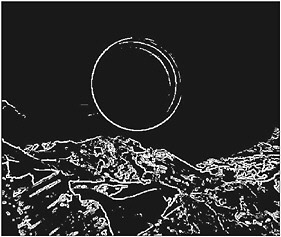