The mobile market penetration in the United States is around 41%, far less than countries like Finland with 75%, Hong Kong with 74%, or the United Kingdom with 74% but still an indication of the market acceptance of wireless communications services (Beal et al., 2001, p. 6). However, in our country, only 6% of users use their mobile phones to access the Internet, and this is a much lower percentage compared with other countries like Japan with 72%, Germany with 16%, or the United Kingdom with 10%. The percentage of people who received wireless messages or offers for products in the United States is 20%, 40% in Japan, and 25% in Germany and the United Kingdom (Beal et al., 2001, p. 9). 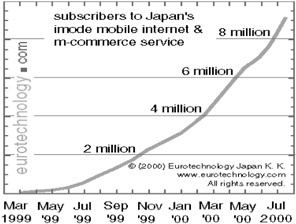 With the increasing use of small portable computers, wireless networks, and satellites, a trend to support computing on the move emerged. The worldwide number of cellular, GSM (Global System for Mobile Communications), and digital subscribers increased from 140 million in 1996 to more than 300 million in 1999 and is expected to grow to 650 million by 2001. In the United States, capital investment increased from $6.3 billion in 1990 to $66.8 billion in 1999, and service revenues were up from $4.5 billion to $38.7 billion in 1999 (Varshney & Vetter, 2000). The International Data Corporation (IDC; Framingham, Massachusetts, USA), forecast revenue generated from m-commerce to explode from an estimated $29 million in 2000 to $21 billion in 2004. As wireless applications develop, so will market demand. Jupiter Media Metrix (Melville, New York, USA) predicts the number of U.S. wireless Web users to grow from 4.1 million in 2000 to 96 million in 2005.

Wireless network operators are currently upgrading their second-generation (2G) networks with HSCSD (high-speed circuit-switched data) and 2.5G technologies such as General Packet Radio Service (GPRS) to be able to handle voice and high-volume data. HSCSD is a multi-global system for mobile communications (GSM) technology, which currently offers up to 43.2 kbps across most of Europe. A 2.5G is typically an "always-on" technology, offering basic digital mobile voice telephony with higher-speed data capabilities of up to 56 kbps. Simultaneously, network operators around the world are building third-generation (3G—the collective third-generation wireless technologies are referred to as 3G services) networks, which offer always-on broadband networking with high-speed data access. Ultimately, 3G networks are expected to include capabilities and features such as enhanced multimedia, high speed (upwards of 2 Mbps), and roaming capabilities throughout Europe, Japan, and North America. Please see current m-commerce statistics listed in Appendix B. 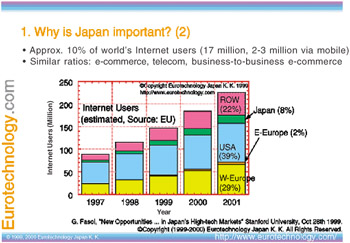