This shows the complete AccessObject object that we can program against; in one way or another almost all code is programmed against one of these object containers.

The AccessObject object refers to one of the following:

You can probably guess what these are. AllForms , for example, refers to all of the forms in a database or project. This allows us to easily get access to all of the objects stored. In previous versions of Access, you would have had to use the Data Access Objects, and the Containers and Documents collections. This method is much easier. Let's have a look at a quick example:

This code is quite simple, but there are a few things that need explaining. Let's start with the variable declarations.

The first declares a variable to hold an Access object - this will be one of the All objects shown earlier. The second variable will hold the current project - this is the current database. We have to use a generic object type here, because, oddly enough, there isn't a specific type for an Access project.

Next we set this object to point to the current project. This will allow us access to all of the objects in the current database:

Once the current project is set, we can loop through the AllForms collection, printing out the name:

You'll be familiar with loops by now, but you might not have seen this particular version. The For Each statement is used with collections, allowing us to loop through the collection. The way this works is that you declare a variable that matches the type of the elements in the collection - in this case it's AccessObject , because we are looping through the AllForms collection. The general rule is:

This has the effect of running the loop for each object in the collection, and each time around, the loop variable ( objObject , or objAO in the example above) is set to point to the individual collection member.

If this sounds confusing, just have a look at the diagram below: 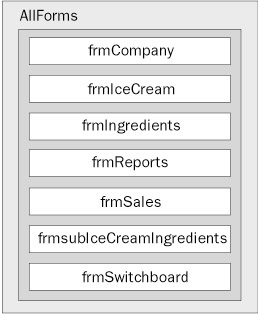 Each time around the loop objAO points to the next form. If you think of a collection as similar to an array then you'll get the general idea (that is, each form is an item in the array or collection).

So what we have is an easy way to find out what objects are within our database. Why is this useful? Given the way applications change, it's a good idea to build in some form of future proofing, to allow you to perform less maintenance as the application inevitably changes. Refer to the earlier section Using Object Models in VBA where we discussed the benefits of not having to hard-code form names : note that the same principle applies here. We loop through the Reports collection with no maintenance required to our code and we automatically get the changes that have been made to the report names or additions/deletions of reports that currently reside in the Reports collection.

Consider you have a form listing all of your reports. You've built this using a single form and hard-coded the hyperlinks , one hyperlink for each form. Something similar to this: 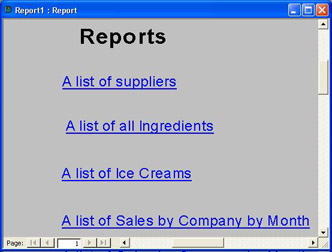 But what happens if you need to add another report? Or even two? You have to edit the form, squash things up so it fits on, and so on. Wouldn't it be simpler to provide a dynamic list of reports? Maybe something like this: 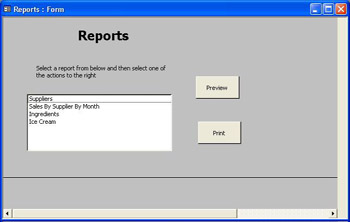 Now when you add a new report to the database it will automatically be added to the list box. Let's have a look and see how we can do this:

This method of filling a listbox is really simple, and relies on you supplying a list of values for a listbox, just by separating the values by a semi- colon . So let's look at how this is done.

Firstly we have the variables , the first two of which you've seen before. This will be used to help us loop through the Report objects. The last variable, strValues , is a string that we will use to build up a list of report names.

Next we set a variable to point to the current project.

Finally we set the properties for the listbox. The first is the RowSourceType property, which when set to Value List means that what's shown in the listbox comes from a list of values. The second line actually sets those values, by setting the RowSource property to the contents of the string containing the report names.

Rather than add the report names to a string ( strValues ) and then assign the string to a property of the listbox ( lstReports ), we can added them directly from the AllReports collection to the listbox and remove the need to use a string to build the list of names.

So let's modify the above example and see how the AddItem method works.

Try It Out-Using the AddItem method of the Listbox control

We then commented out the lines of code that build the string strValues and assign that value to the row source - we don't need to use them in this example. (Commenting out code is a cool way to effect changes and it helps you if you need to restore the changes at a later date).

Next we insert the line of code that will call the AddItem method of the listbox to add the names of the reports to the listbox. Note the object referencing: Me (the Me property is discussed shortly) refers to the form, lstReports is the name of the listbox that is contained by the form, AddItem is a method of the listbox and we pass to this method the name of the report. Because we have this code nested inside a For EachNext loop we move through the AllReports collection progressively adding items (report names) to the list until each one has been added.

As the above example shows, using the AddItem method of the listbox is quite intuitive. Both of the above examples underscore the value of thinking in terms of objects and their properties and methods when you want to perform a task or a set of tasks .

Now that we have a working listbox, let's add those buttons so we can view or print the reports.

Try It Out-Adding the Print buttons

With just a few lines of code you have a couple of command buttons to preview and print any report.

Each of the command buttons calls ProcessReport passing in a different constant (predefined by Access). We either want to preview the report ( acViewPreview ) or we want to open the report normally ( acNormal ).

That's all there is to it.

Since we've just looked at opening reports, let's have a quick diversion into the switchboard, just to point out a couple of facts. If you've tried to use the switchboard to open other forms you'll notice that only two of the buttons are working - those for the Ice Cream Details and the Ingredients. You might also have noticed the method used to open these forms - using hyperlink addresses. Now we'll be covering these in more detail later in the book, but basically they give you a simple way to jump from form to form without any code.

We have a minor issue with using hyperlinks:

A thing to do under these circumstances is to remove the hyperlinks and use VBA to open the forms.

We are utilizing the Where argument of the OpenForm command, which allows us to specify a SQL WHERE clause as part of the open. This means that instead of frmCompany showing all the records, it will only show records where the Supplier field is set to True .