Supporting DMA in a KMDF driver requires code in several of the driver's event callback functions, as Figure 17-3 shows. 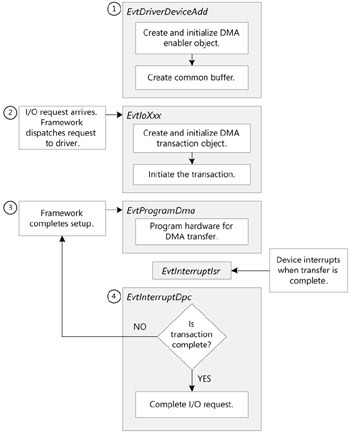 The following sections describe each of these processing phases in detail, using sample code that is based on the PLX9x5x sample KMDF driver provided with the WDK. The sample driver supports a PCI device that has port, memory, interrupt and DMA resources. The device can be stopped and started at runtime and supports low-power states. The hardware has two DMA channels, so the driver uses one channel for reads and the other for writes. The driver configures two sequential queues: one for read requests and the other for write requests.

During initialization, typically in the EvtDriverDeviceAdd callback, the driver configures and creates the DMA enabler object and, if the device supports common-buffer DMA, the common buffer object.

If the driver has specified a packet-based DMA profile, it must serialize all of its DMA transactions because the framework allows only one packet-based DMA transaction to execute at any given time. To implement the serialization, the driver should either dispatch all of the I/O requests that require DMA from the same sequential queue or implement manual dispatching and call the framework to get the next I/O request only after the previous request is complete.

The DMA profile indicates the device's basic DMA characteristics, such as whether it supports 64-bit addressing and hardware scatter/gather. Most of the names of the available DMA profiles are self explanatory, but for completeness, Table 17-2 lists all of the profiles and their associated attributes.

After initializing the structure, the driver creates the DMA enabler object by calling WdfDmaEnablerCreate.

Next, the driver must get the system virtual address and the device bus logical address of the common buffer by calling two additional WDF methods:

These addresses are required to program the device in the EvtProgramDma callback function.

The example in Listing 17-1 supports a hybrid device, so it demonstrates the required initialization for both common-buffer and packet-based DMA support. This example is from the Sys\Init.c file in the PLX9x5x sample driver.

The example in Listing 17-1 performs the following tasks:

The sample driver starts by setting the required alignment for the device object. The framework uses this value as the alignment for DMA if the driver does not specify an alignment requirement when it creates the common buffer.

Next, the driver initializes a WDF_DMA_ENABLER_CONFIG structure by calling WDF_DMA_ENABLER_CONFIG_INIT. It specifies the DMA profile that best describes the device and the maximum transfer length that the device supports in a single DMA operation. The driver selects the WdfDmaProfileScatterGather64 profile to indicate that the device supports both 64-bit DMA transfers and hardware scatter/gather.

With the WDF_DMA_ENABLER_CONFIG structure initialized, the driver creates a new DMA enabler object by calling WdfDmaEnablerCreate. The driver stores the handle to the created object for later use.

This device uses a hybrid design-that is, it supports a combination of packet-based and common-buffer DMA, so the sample driver now creates a common buffer. It does this by calling WdfCommonBufferCreate, passing the length in bytes of the required common buffer. The allocated common-buffer area is not necessarily physically contiguous. By default, the common buffer has the same alignment that was specified earlier in the call to WdfDeviceSetAlignmentRequirement. Alternatively, the driver could call WdfCommonBufferCreateWithConfig to create the buffer and set the alignment requirement.

In addition to allocating the common-buffer space, WdfCommonBufferCreate and WdfCommonBufferCreateWithConfig allocate enough contiguous map registers to translate the physical addresses spanned by the common buffer to device bus logical addresses. These methods also program those map registers to perform the necessary translations between logical and physical device bus addresses.

Next, the driver calls WdfCommonBufferGetAlignedVirtualAddress to get the kernel virtual address of the common buffer that it just created. The driver uses this address to manipulate the data structures in the common-buffer area that it shares with the device. The driver completes its DMA-specific initialization by calling WdfCommonBufferGetAlignedLogicalAddress to get the device bus logical address of the common buffer.

When the driver receives an I/O request that requires DMA, it initiates the DMA transaction. Typically, this code appears in the EvtIoRead, EvtIoWrite, or other I/O event callback, but if the driver manually retrieves I/O requests from a queue, the code might appear elsewhere.

Before the driver can initiate a DMA transaction, it must initialize the DMA transaction object with information about the requested transfer. The framework uses this information-along with the DMA profile that the driver previously supplied in the DMA enabler object-to calculate the number of required map registers for the transfer and to create the scatter/gather list that the driver uses to program the device.

If the driver has received an I/O request from the framework, it uses WdfDmaTransactionInitializeUsingRequest to initialize the transaction object with data from the request object. This method takes as input a pointer to the WDFREQUEST object to be processed, an enumeration constant that indicates whether the transfer moves data to or from the device, and a pointer to the driver's EvtProgramDma callback.

If the driver performs common-buffer DMA or performs DMA transactions that are not based on an I/O request, it calls WdfDmaTransactionInitialize to initialize the transaction object. In addition to the direction of the transfer and a pointer to the EvtProgramDma callback, this method takes as input a pointer to an MDL that describes the buffer to use for the transfer, the virtual address of the buffer, and the buffer length. The driver calls WdfRequestRetrieveInputWdmMdl for a write request or WdfRequestRetrieveOutputWdmMdl for a read request to get a pointer to the MDL, and then calls kernel memory manager functions to get its virtual address and length.

The following example draws again from the PLX9x5x sample driver. The code in Listing 17-2 shows the steps that a typical KMDF driver performs to initiate a DMA transfer. This code appears in the Read.c file.

The example in Listing 17-2 shows the driver's EvtIoRead callback, which performs the following tasks to initiate a DMA transaction:

The driver starts by calling the PLxGetDeviceContext accessor function to get a pointer to its WDFDEVICE context area. It then validates the length of the transfer.

The driver next calls WdfDmaTransactionInitializeUsingRequest to associate the request that the framework passed to its EvtIoRead callback with the DMA transaction object that it previously created. As input parameters, this function takes handles to both the I/O request object and the DMA transaction object. It also takes as input a transfer direction indicator-WdfDmaDirectionReadFromDevice or WdfDmaDirectionWriteToDevice-and a pointer to the driver's EvtProgramDma callback, which is named PLxEvtProgramDma. WdfDmaTransactionInitializeUsingRequest validates the parameters for the request and sets up as much of the internal infrastructure as possible.

If an error occurs during initiation, the driver calls WdfDmaTransactionRelease to free the resources that the framework set up for the transaction without deleting the transaction object. The driver then completes the I/O request with an error status in the usual way.

A driver's EvtProgramDma callback function programs the DMA device to perform a transfer. The framework passes the driver a pointer to a scatter/gather list, which contains one or more pairs of a device bus logical address and a length that together describe the transfer. The driver uses these address/length pairs to program the device for the DMA transfer.

The following is the prototype for this callback function:

The EvtProgramDma function should return TRUE if it successfully starts the DMA transfer, and FALSE otherwise.

After the framework sets up a transaction, it calls the driver's EvtProgramDma callback function to perform a DMA transfer. This function should perform the following steps:

Remember that a single DMA transaction can involve more than one DMA transfer operation. This could happen if the I/O request involves a large amount of data, if the device has a limited capacity to transfer data, or if system resources are so constrained that the size of the buffer or the number of map registers is limited.

If this is the first transfer to be performed for this request, the driver programs the device to start transferring data from the beginning of the buffer. However, if one or more transfers have already been performed for this transaction, the transfer typically must start at some offset from the beginning of the buffer. To determine the offset and, by inference, find out whether this is the first transfer, the driver calls WdfDmaTransactionGetBytesTransferred, passing a handle to the current DMA transaction object. The method returns the number of bytes that have already been transferred for the transaction or, if no transfers have been performed yet, it returns zero. The driver can use the returned value as the offset into the buffer.

After it determines the offset, the driver should set up the required data structures to program the device. The specific details vary from one device to another, but a typical DMA device requires a base address and a length for each component of the transfer. The EvtProgramDma callback receives the base/address length pairs in the scatter/gather list parameter. The number of elements in the scatter/gather list depends on the type of DMA being performed and the type of device. For packet-based DMA, the list contains a single pair. For a device that supports hardware scatter/gather, the list contains multiple pairs. The driver translates these pairs into a form that the device can understand.

If the driver successfully starts the DMA transfer, the EvtProgramDma callback returns TRUE. If errors occur, the driver should cancel the current transaction and return FALSE.

The example in Listing 17-3 is from the PLx5x9x sample's EvtProgramDma callback function for read requests in the Read.c file. Much of this function is device-specific code that is not reproduced here.

First, the driver initializes its local variables and then calls WdfDmaTransactionGetBytesTransferred to determine how many bytes of data have already been transferred for this transaction. It uses the returned value to determine the offset into the buffer at which to start the transfer.

If errors occur during device programming, the driver calls WdfDmaTransactionDmaCompletedFinal, which indicates to the framework that the transaction is complete but all of the data was not transferred. This method takes a handle to the transaction object, the number of bytes that were successfully transferred, and a pointer to a location to receive a status value. Although the method is defined as a Boolean, it always returns TRUE, so the sample driver casts it to VOID. The driver then releases the DMA transaction object for later reuse, completes the I/O request with the STATUS_INVALID_DEVICE_STATE failure status, and returns FALSE from the callback function.

If the driver programs the device successfully, the callback function returns TRUE. The device interrupts to indicate that the transfer is complete.

When the device signals the completion of a DMA transfer, the driver must determine whether the entire transaction is complete. If so, it completes the I/O request and deletes or releases the DMA transaction object.

Both of these methods do the following:

If the entire transaction is complete, the driver completes the associated I/O request.

If the entire DMA transaction is not complete, one or more additional transfers are required to complete the transaction. The framework then allocates the necessary resources for the next transfer and calls the EvtProgramDma callback again to perform another transfer.

Once again using the PLX9x5x sample driver as a general guide, the code example in Listing 17-4 illustrates the steps that a typical KMDF driver performs to complete a DMA transfer. The sample code is based on the read completion processing in the driver's EvtInterruptDpc callback in the Isrdpc.c file.

This sample code fragment shows how a typical KMDF driver handles DMA transfer completion. The driver executes this code after the device interrupts to indicate that the read operation is complete.

If WdfDmaTransactionDmaCompleted returns FALSE, the EvtInterruptDpc callback performs no more processing for this DMA transaction because the framework immediately calls the driver's EvtProgramDma callback to process the next transfer associated with the transaction.