The term "benchmarking" refers to testing your computer and assigning some sort of score to your computer's configuration. The score can be an amount of time, such as the amount of time it takes your computer to solve a complex math problem. The score can also be a calculated point value that is determined by running a variety of tests, such as hard drive transfer speeds. The test can read and write files to your hard drive and then calculate a weighted score depending on how each test goes. The amount of time or calculated point value has very little value on its own; it is when the time or point value is compared to other results of the same test that it becomes valuable.

In addition to providing a clearer picture of the performance of your hardware with Windows Vista, the Windows System Performance Rating simplifies the process of identifying software that will work with your hardware. Remember the days of having to look at the system requirements on the side of a software box? To make it easier for less technical computer users to select software that will work well with their hardware, there will be a Minimum performance rating on the box. Now even your parents can buy software and easily identify if it will run well on their computer. It sure beats trying to explain why that new computer game that requires the latest video card will not work on the old budget PC they have at home. If it requires a Performance Rating of a 5 and your system is a 2, it just is not going to work well, if it even works at all.

Microsoft included this new feature in Windows Vista to make it easier for consumers to understand how powerful the combination of their hardware components actually is. The performance rating application generates an overall score based on the performance and features of your CPU, RAM, hard drive, and graphics card. For example, my computer has been given a score of 3 (see Figure 8-13). In addition to the overall score, you are also provided with individual component scores called the Sub Rating. These scores are useful to get a quick idea of the overall performance of your computer compared to other configurations. 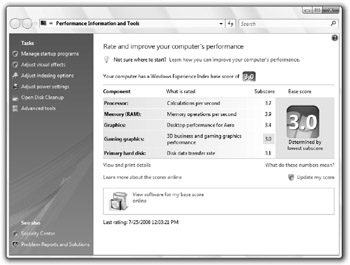 The exact method of scoring different hardware is unknown but is based on support of different levels of features and the performance of your hardware. For example, to get a score of 3, your hardware must support features x, y, and z, in addition to a minimal processor speed and amount of RAM and hardware performance level.

Using and understanding your performance rating

As I mentioned earlier, the overall score of your computer is useful to determine how your hardware compares to other configurations. However, the main purpose of the rating is to determine how well Windows Vista will run on your specific configuration of hardware. The Sub Ratings are the most useful for the purpose of identifying possible bottlenecks and areas that you should investigate further. To get started let's bring up the Performance and Rating Tools window for your computer:

Now that the Performance and Ratings Tools window is loaded and populated, you can analyze the results. I like to see if any of the numbers stand out as lower than my overall rating and may be holding back a higher overall score. For example, if all my Sub Ratings are between 3 to 5 except my Ram Sub Rating is much lower at a 1.2, then it becomes very clear that I should concentrate on determining if I should buy some more RAM.

Depending on your results, if you get a low score in the CPU, RAM, Hard Drive, or Graphics ratings, you should be able to determine what areas to focus on as you explore other more detailed monitoring tools next.

PCMark05 Basic Edition, from Futuremark Corporation, is one of the most popular benchmarking programs for power users. PCMark05 has a cool online component that allows you to view your benchmark data and compare it to other users' computers. Additionally, the application generates an overall score that can be used to compare your system to other systems. The comprehensive score that is assigned to your system is the result of numerous test results testing various parts of your computer.

You can download a copy of PCMark05 from http://www.futuremark.com/download/.

The user interface of PCMark05 is very simple and is easy to use. Simply click the Run PCMark button to start the tests. The free version includes only basic tests that simulate various computer usages to come up with your overall score. The basic system tests include the following:

After you click the Run PCMark button, the system tests will begin, as shown in Figure 8-15. 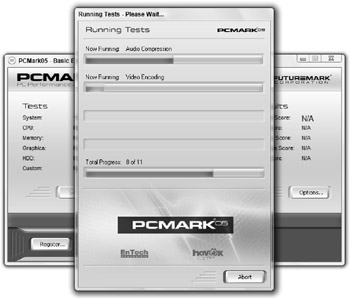 After the benchmark tests have completed, you will be shown your system's overall score. To view the detailed scores of the different tests, you will have to register on Futuremark's Web site via the link on your results window. This is a slight letdown, but registering on the site enables you to compare your system against other systems. You can find out what hardware really performs and what hardware you should avoid. Overall, the PCMark05 Web site adds a great amount of value to the application.