Lesson 3: The Kerberos Protocol in Windows 2000

A standard process within computer security is to include a function that requires users to prove that they are who they claim to be. This affirmation of identity is accomplished when the user supplies the correct password for the user account. For example, when User1 attempts to connect to a server to access a file, the server must be sure that it is really User1 sending the request. Traditionally, the server assumes that it is User1 because the correct password was supplied when the connection was established. Stronger security is accomplished by having a trusted third party verify the identity of the user. This is a core function of the Kerberos authentication protocol.

Overview of the Kerberos Protocol

The Active Directory client for Windows 95 and Windows 98 allows users to log on by using the Kerberos v5 authentication protocol.

When using the Kerberos authentication protocol, users can no longer log on and then access resources simply by providing a valid user ID and the correct password. Instead of trusting the source, the resource must contact the Kerberos service to obtain a ticket that vouches for the user. The Kerberos service operates as a trusted third party to generate session keys and grant tickets for specific client/server sessions.

When the Kerberos service issues a ticket, it contains the following components:

A principal is a uniquely named user, client, or server that participates in a network communication.

A secret key is an encryption key that is shared by a client or a server and a trusted third party to encrypt the information that is to be moved between them. In the case of the Kerberos protocol, the trusted third party is the Kerberos service. In the case of a principal, the secret key is typically based upon a hash or encryption of the principal's password. Secret keys are never transmitted on the network; only the encrypted information is transmitted.

The key distribution center (KDC) provides two functions: acting as the authentication server (AS) and the ticket granting service (TGS). The TGS distributes tickets to clients that wish to connect to services on the network. However, before a client can use the TGS to obtain tickets, it must first obtain a special ticket (the ticket granting ticket [TGT]) from the AS.

The privilege attribute certificate (PAC) is a structure that contains the user's security ID (SID).

In a basic Kerberos protocol exchange, the client contacts the TGS and requests a ticket for the target server before contacting the target server. A ticket is a record that allows a client to authenticate itself to a server; it is simply a certificate issued by the Kerberos service. The ticket is encrypted so that only the target server is able to decrypt and read it. Tickets contain the identity of the requesting client, the timestamp, the servers session key, the lifetime of the ticket, and other information (such as the PAC) that helps verify the identity of the client to the target server. Tickets are reusable within their life span, which is usually 8 hours.

One method for using the Kerberos protocol is to simply request a ticket for each target server from the TGS portion of the Kerberos service whenever the user wants to access the specified target server. Using this method, the response from the request would contain a session key and other information that is encrypted with the user's secret key. This method results in a component of the user's secret key being exposed on the network every time a new ticket request is made.

In Windows 2000, the Kerberos protocol protects the secret key by initially authenticating the user and then requesting a ticket granting ticket (TGT). A TGT is a request for a ticket and a random session key to be used with the TGS portion of the Kerberos service. After obtaining the ticket, the user can contact a service at any time; the requested ticket does not come from the AS, but from the TGS. The reply is encrypted not with the user's secret key, but with the session key that the AS provided for use with the TGS.

Features of the Kerberos Protocol

When using the Kerberos protocol, servers do not need to do pass-through authentication. A server running Windows 2000 can verify the client credentials by using the client-supplied ticket, without having to query the Kerberos service. This is because the client will have already obtained a Kerberos protocol ticket from a domain controller, which the server can then use to build the client's access token. Since the server is required to do less work when establishing a connection, it can more easily accommodate a large number of simultaneous connection requests.

Delegation of authentication allows a user to connect to an application server, which in turn can connect to one or more additional servers on the client's behalf, by using the client's credentials. 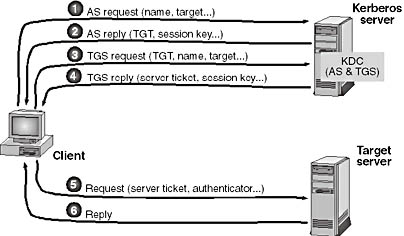 The AS and TGS exchanges with the Kerberos service operate over UDP port 88. The exchanges between the client and target server are dependent on the protocol in use between the two principals.

Occasionally, it is necessary for an application server to connect to another server on behalf of a client. Like impersonation, delegation is used to ensure that proper security permissions are applied against the application server's request.

Figure 27.13 provides an overview of the Kerberos protocol delegation process. The numbered steps in the diagram are described below. 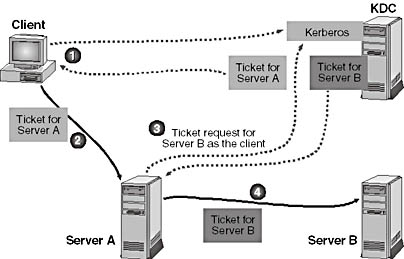 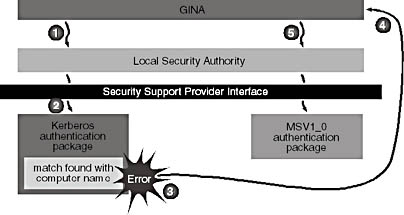 For local user accounts, the following takes place in Windows 2000:

The exchange that occurs when a user logs on to Windows 2000 with a domain user account is similar to the basic Kerberos protocol exchange. Figure 27.15 provides an overview of this logon process. The number steps in the diagram are described below.

The following are the steps in the domain interactive logon process:

During startup, both the Server and Workstation services initialize their interface with the Negotiate package in LSA by using SSPI. During this process, the server service obtains a credential handle for its default credentials.