While the baby boomers age, the babies of the baby boomers, called the millennial generation, which numbers about 71 million people born between 1977 and about 1994, will begin to advance into adulthood. This demographic shift will result in two huge generational waves—baby boomers in the upper end and millennials at the lower end—bracketing the trough represented by the 41 million strong GenerationX in the middle. The result: The overall consumer economy will polarize, with significant growth at the luxury end targeting the affluent, empty-nesting baby boomers and strong demand for economy priced goods for the millennials who will be setting up homes, having families, and facing the challenge of stretching a small paycheck across the demands of a growing family. This polarized consumer economy will be a totally new experience for marketers and retailers, because the consumer story for the past century has been all about the great big growing middle class. Now the consumer economic action will be directed toward the opposite ends of the spectrum.

So along with the significant growth prospects at the luxury and low-priced economy end, the future also holds a paradoxical twist. The affluent baby boomer consumers who can afford to pay full price for their luxuries will inevitably reach down to take advantage of the incredible bargain offerings for those less economically endowed. Even more interesting, the millennials with limited budgets and growing families will reach up to buy those high-priced luxury items to which they aspire.

We are already seeing this trend of "class" luxury consumers reaching down to mass and the "mass" moderate income folks extending to "class" today. In two consecutive years of surveys among the luxury consumers, we found that in every product category but one—luxury cosmetics and beauty products—the majority of shoppers bought their last luxury item on sale or at a discount. The luxury consumers are savvy shoppers and they know how to find a bargain. When you find a $300 jacket on sale for $150, you get an experiential thrill that means you are a winner in the shopping game. Likewise, the new book, Trading Up: The New American Luxury, by Michael Silverstein and Neil Fiske, documents the trend of the masses trading up to the classes by scrimping and saving in one category of their life in order to buy luxury in another. So the hip-hop generation has embraced the Burberry plaid and young professional women invest in Manolo Blahnik shoes while they buy their dress suits on sale at Banana Republic.

The luxury consumers are savvy shoppers and they know how to find a bargain.

The average educational level of American consumers is on the rise, and our government's continued emphasis on public education fore-shadows a continuation of this trend. Younger people in particular are far more educated than the older population. The most highly educated age group in our society is those under age 25, where 64 percent have some college or more educational attainment. Many consumer marketers have largely overlooked the potential impact of this key demographic shift. Linked to income levels, educational attainment plays a larger role in consumer behavior than many marketers recognize.

More educated consumers have very different needs and expectations of the products they buy and the brands they support than less educated consumers do. More educated consumers come equipped with a more highly developed and complex set of consuming values, and they know how to research and evaluate information to guide their decision making. Remember the tsunami impact that Ralph Nader and his book Unsafe at Any Speed had on the U.S. car industry? He single-handedly had more to do with the shaping of the modern cars we drive than any other individual, company, or industry leader. Think what might happen to any consumer industry if a twenty-first-century "Ralph Nader" examined its product safety, the welfare of its workers, its contribution to society, its protection of the environment, or even its support of governments or regimes that allow terrorist organizations to exist within their borders. A more educated consumer population may well present new challenges, especially for companies and industries that may not be as "politically correct" as others. Companies can no longer afford to sidestep the safety of their products or react defensively if some product has a flaw or fails completely. Consumers today are just too smart. At the same time, they are more informed and educated in how to manage risks, and they are far more security conscious. Abraham Lincoln said: "You can fool all the people some of the time, and some all of the time, but you cannot fool all the people all the time." Today, with the rising educational levels of the population, it is getting harder and harder to fool them at all.

In certain categories, such as electronics, computers, art, and books, education level is linked to increased purchase incidence. Marketers of these products can anticipate a prosperous future, as a growing market of sophisticated, educationally enhanced consumers demands more of these products. Look at how a company like Gateway has taken the opportunity to sell to better educated customers through a campaign that uses humor and irony.

Branding is all about establishing an emotional connection between the product or brand and the consumer.

Frank Purdue said: "It takes a tough man to make a tender chicken." Ted Waitt, CEO of Gateway Computers, is proving it takes a "smart" cow to tell a "dumb" man how to sell computers.

Any high-tech CEO who lets himself play straight man to a talking cow is supersmart in my book. Using irony in product marketing messages has been a big "no-no," because it takes a sophisticated audience to be able to understand it and see through it. However, Waitt and the smart, talking cow reinterpreted the dynamics of the Bugs Bunny-Elmer Fudd relationship, and in doing so worked marvelously together in communicating their marketing message about the latest and greatest computer gadgetry from Gateway. This series of ads talked to Gateway's sophisticated, educated, entertainment-literate audience.

It is so humbling and so refreshing to see Waitt let the cow be the smart guy and such a wonderful counterpoint to his high-tech CEO cohorts. I personally cannot see Bill Gates or Michael Dell playing second fiddle to a cow, but I would like them more if they did.

What these ads said to me as a consumer is that Gateway is really, truly a different computer company. If Ted Waitt can take directions from the cow, then I, techno-illiterate that I am, can go to the Gateway store and get good direction and advice. I do not need to know anything about computers to buy a Gate-way. The cow knows, and that is all that matters. Brilliant, brilliant marketing! 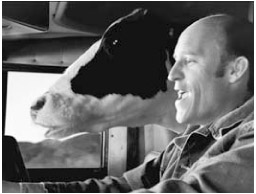 In California, non-Hispanic whites are already a minority. Within the next 60 years, that will be true throughout the United States. White Americans of non-Hispanic origin will fall below 50 percent of the population, while Hispanics, blacks, and other ethnic groups together will represent the national majority. Called the "minority majority" trend, it will bring big changes to our country's cultural, political, economic, and consumer landscape.

While emotions are universal and cross all cultural divides, the ways people from different cultures express those emotions differ.

While we do not brand one culture bad and another one good, we recognize that people from different cultures behave differently. With America being the melting pot of the world, ethnic stereotypes are part of our cultural mythology. Anglos are reserved, Scots are frugal, French are romantic, Italians are demonstrative, Germans are stubborn, and so forth. The foundations of those ethnic stereotypes are the shared cultural values, expectations, and behavior patterns that children absorb as they grow up in a culture. While emotions are universal and cross all cultural divides, the ways people from different cultures express those emotions differ. Because people make discretionary purchases for emotional reasons, we need to understand how people with different cultural origins express those emotions as consumers. It is in these differences that opportunities and challenges will abound for discretionary marketers in America over the next 60 or so years. In our examination of consumers' purchasing behavior, we found some, but not a lot of differences based on ethnic heritage. For example, black Americans place a higher priority on education than non-Hispanic whites do as a justifier for discretionary purchases, and they also purchase TVs and other electronic equipment at a higher rate. While few ethnic distinctions were uncovered in this research, we expect more differences in ethnic consumer behavior to be expressed in the next half-century as the minority majority trend expands.

The discretionary product categories that are highly tradition bound, such as Christmas and seasonal decorations, home décor, housewares, and tabletop, are expected to be the most affected by the minority majority trend. The whole business of tabletop dinnerware, for example, is predicted to be strongly influenced by the rise of the Hispanic population and their different culturally based needs and expectations for dinnerware and tableware. Just like every culture has its unique cuisine, every culture has its own way of dining, setting the table, serving, and participating in the meal. Today's tabletop industry, especially its marketers of fine china, traces its heritage to eighteenth- and nineteenth-century upper-crust England, and it clings to that heritage even today. But how many contemporary American consumers aspire to dine as nineteenth-century English landed gentry did?

The discretionary product categories that are highly tradition bound are expected to be the most affected by the minority majority trend.

There is a great opportunity for tabletop and housewares companies to market to the growing ethnically diverse America. However, they need to research and understand each culture's unique dining heritage in order to market contemporary products that reflect that heritage. There is a strong risk for established tabletop companies that they will fall by the wayside if they do not figure out how to bridge the cultural divide and reach out to the emerging minority majority consumers.

Let Them Eat Cake: Marketing Luxury to the Masses - As well as the Classes

Why We Buy: The Science of Shopping--Updated and Revised for the Internet, the Global Consumer, and Beyond

Shopping: Why We Love It and How Retailers Can Create the Ultimate Customer Experience