This section examines some of the commands that you can use to find your way around Fedora Core 2 using the command line shell. There are different categories of commands:

This section takes a look at these three categories of commands and examines some frequently used examples of each.

Filesystem commands allow you to access and manipulate various parts of the UNIX filesystem tree. In UNIX, the filesystem is organized as a tree structure, in much the same way as in other operating systems (each directory can contain files and subdirectories). For each machine, there is always one root directory; this is the topmost directory, and contains subdirectories and files. Refer to the root directory by using the forward slash ( / ).

From this basic structure, there are a number of tasks that you may need to do, such as changing the working directory, establishing the contents of a particular directory, or creating, copying, moving, and deleting files and directories.

Changing and Establishing the Working Directory

For example, to select the root directory to be the working directory, you would type the following:

To select the directory /home/deepakt (the home directory of the user deepakt ) to be the working directory, you could type this:

In both of the preceding examples, you ve specified the absolute path of the directory in question. You can also use relative paths. For example, if you wanted to change the working directory from /home/deepakt to its parent directory, /home , you could use the absolute path, like this:

Listing the Contents of a Directory

The ls command has a multitude of options. The preceding example uses two options:

When it comes to creation and removal, directories and files are handled differently, so we ll take a couple of subsections to explain.

You use mkdir (make directory) and rmdir (remove directory), respectively, to create or remove directories. The following example creates a subdirectory under the present working directory, called grapple :

By default, the rmdir command can remove only an empty directory, that is, one that has no files in it. This is designed to help you avoid deleting files that you didn t necessarily know were there:

To remove a directory and its contents recursively including the subdirectories, you can use the rm “r command:

A quick way to create a file is to use the touch command. The actual purpose of the touch command is to update the timestamp of an existing file (the idea being that if you touch the file, the OS should update its timestamp). A side effect of this is that if you specify the path of a file that does not yet exist, Linux also creates an empty file:

To remove a file, use the rm (remove) command:

This is a classic example of moving a file. It uses mv not to move the file to a different directory, but simply to change the name of the file. In Linux, moving a file really means changing its path.

It s also possible to move multiple files at the same time. For example, the following command moves the files squeezy.txt and stodgy.txt from the present working directory to the directory /etc/textures :

Try It Out Creating, Moving, and Removing Files and Directories

Let s step through a simple example in which you create a directory with a file in it, and then rename the file. After you are done experimenting, you will clean everything up by deleting both the file and the directory.

UNIX (and therefore Linux) has processes that are essentially tasks running on the operating system infrastructure. Each time a command is invoked, the invocation results in one or more processes being spawned. Processes belong to users, and in general are insulated from one another. Often, the only time general users of the system are concerned with processes is when one refuses to respond; this is commonly referred to as a program hang .

To list all the processes on the system, you can use the ps command with the “A option:

Getting the Complete Command Line

Processes represent commands that were executed. But what ps does not tell you (at least not easily) is what the complete command line was when the process was invoked. Sometimes, you need to know what arguments were passed to the command and what options were invoked. To see the complete command line of a process with the name of the owner of the process , you can coax the ps command with the “auxww options:

You can use the kill command to send a signal to a process by specifying the signal to be sent and the Process ID. The signal that most general users are interested in is the SIGTERM signal, which terminates the process. This is particularly useful for dealing with a process that is hanging or has run amok:

The SIGTERM signal can be handled by processes. In other words, it allows processes to clean up before exiting; for example, the process may want to close the files it has opened before exiting. If the safer option of SIGTERM does not work, you can resort to SIGKILL . The SIGKILL signal forces a process to terminate immediately ”it does not allow it to exit gracefully. The man 7 signal command lists and describes the complete set of signals.

The top command allows you to see which processes consume maximum resources on the system (see Figure 6-1). The top command refreshes the screen periodically because the resource consumption on a system usually fluctuates rapidly . 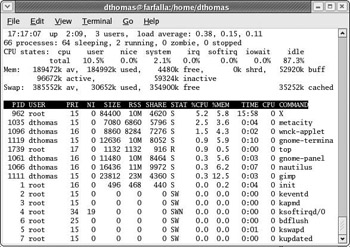 For day-to-day activity on your Linux system, it s generally a good idea to log in using a regular user account ”that is, one that has no administrative privileges. (For example, this protects you from the dangers of accidentally deleting or changing important files and configuration.)

However, to perform certain privileged tasks, such as shutting down the system, you need to assume the identity of an administrator (or root user, in UNIX parlance). In these situations, it s rather inconvenient to have to log out of the system and log back in as a root user. There is a simpler alternative ”you can use the su command (with no arguments) and supply the root user s password. This provides you with a shell that has the privileges of the root user. When you ve completed your administrative tasks, you can switch back to the safety of non-admin privileges by exiting the root shell by typing exit or Ctrl+D .

The su command can also be used to switch identities between two non-root users. The id command prints the current user ID of the user:

The uid field indicates the user ID of the user, which is a unique number, assigned to each and every user on the system. The gid is the group ID of the primary group that a user belongs to. A group is essentially a collection of users who have some common set of privileges. For example, all members of the engineering group may have access to the blueprints directory on a machine. Each user belongs to at least one group, which is known as the primary group. In addition, they may also belong to other groups as indicated by the groups field. Groups, such as users , have a number associated with them; in the preceding code, 513 denotes the group ID of the users group.

Shutting Down and Rebooting

The shutdown command shuts down the system. This command is restricted to root users only. Shutdown can be immediate (in which case the now argument is passed), or it can be delayed (by n seconds by passing the “t n option).

The df command displays a partition-by-partition summary of disk usage. You can supply arguments such as “k to indicate to df that it should report disk usage in increments of kilobytes, as shown here:

Often, you need to read from CD-ROM discs, and to read from and write to floppy disks. Because Linux treats all peripheral devices as filesystems, you must mount or associate these physical devices to a filesystem mount point ”essentially a directory. The mount command can be used to mount such media. You must have root user privileges to mount and unmount devices.

Here s an example. Start by trying to use ls to list the contents of /mnt/cdrom :

The exact listing you get depends on which CD is in your CD-ROM drive.

The complementary command is the umount command, which disassociates a device from a filesystem mount point:

The eject command is also handy for CD-ROM devices because it unmounts the device and pops the tray open (on condition that the underlying CD-ROM drive supports this operation).

Often, administrators (and even regular users) need to see the list of users currently logged on to the system. (This is a little counterintuitive to users familiar with desktop operating systems because the UNIX model allows users to connect to a system remotely using programs such as telnet and rlogin .)

You can achieve this with the who command, which lists all users currently logged on to a machine:

The finger command goes one step further, listing users logged on to a remote system somewhere on the network. For finger to work, the remote server should have the fingerd daemon running; this is becoming rarer by the day in these times of increased system security.