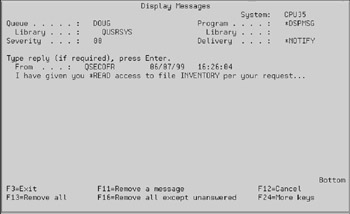 Although you also can use special values *USRPRF and *WRKSTN to display either (but not both) your own user profile and display station's message queues, these special values are seldom used. It is much easier to let DSPMSG give you both queues by not keying in any value.

You can enter any message queue name you want (and have authorization to) in the MSGQ parameter, including QSYSOPR. You also can display QSYSOPR's message queue by keying in the value QSYSOPR or *SYSOPR. Because an asterisk is harder to type than the letter "Q" (the asterisk requires the Shift key), *SYSOPR is not of much value.

You can use other parameters in the DSPMSG command, but they aren't as important as the MSGQ parameter. For example, you can specify where to begin displaying the messages. You can display at the top or at the bottom of the message queue, using the START parameter's *FIRST and *LAST values. The default value is *LAST.

The DSPMSG command panel offers several function keys, including three to remove messages from the message queue. Use these function keys carefully.