For different types of games, what a level is expected to accomplish changes significantly. Consider action/exploration games such as Super Mario 64 , Tomb Raider , or Doom . Though the gameplay in these three games is significantly different, the functions the levels serve in each are remarkably similar. In all these games, players customarily play through the level from a distinct beginning point to a separate end point. A big part of playing the level is exploring the spaces it contains, and as a result, once players have played through the level, it is significantly less fun to play a second time. Furthermore, any encounters players might have with characters or adversaries in these levels are carefully predetermined and set up by the level designer. Every time players play such a level, they will have roughly the same gameplay experience as the last time they played it. The flow of the level is more or less linear, with perhaps only a few choices of how to get from point A to point B.

RPGs offer roughly the same flow pattern as the action/exploration games discussed above, but with a bit more non- linearity . The designer usually intends for players to navigate to a particular location in a particular way. RPGs may tend to be a bit more non-linear than action/adventure games, usually allowing players to choose the order in which different actions can be performed. Often hub style gameplay allows players to branch off on different adventures while returning to a central location, such as a town. Players may also stay in the town to hone their skills for as long as they like. In the end, though, RPGs offer similar level flow as action/adventure titles.

In a level from a strategy game such as WarCraft or Civilization , however, the action is less canned and the level flow is less clearly defined. WarCraft and Civilization may be as different from each other as Super Mario 64 and Doom , but the way they use their levels is the same. Exploration is not such a central part of the enjoyment of these strategy games, and the battles may take place on any part of the map. Different locations may provide specific strategic advantages when used correctly, but battles can start in one location and move to another, or certain sections of the map may go completely unexplored and unexploited by the players and their opponents. The gameplay on such a map is often significantly less predictable than on an action/exploration game s map. The level s flow is more nebulous. 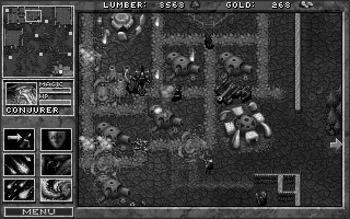 The flow of a level of a real-time strategy game like WarCraft is less defined than in an action/exploration game: combat encounters can take place all over the map.

Of course, there is at least one distinguishing characteristic that makes the level flow in Civilization significantly different from that of WarCraft. In Civilization , any one game consists of play on only one level. That is, players start a game of Civilization on one level and play on that level until they win or lose, while in WarCraft players encounter a series of scenarios on a series of levels. Civilization presents a much more continuous gameplay experience for players, which may in turn make it that much more addictive . Whereas a game like WarCraft presents players with an easy stopping point ” the end of a level ” a game like Civilization has no such breaks. Both types of games may include levels with unpredictable flows, where different players can play the levels significantly differently, but since players in Civilization spend all of their time on one map, the overall feel of the game is radically different. Of course, the fact that Civilization is turn-based while WarCraft is real-time significantly changes the flow of the games as well, but that is a change in gameplay rather than a change in level design and usage.

Returning to our action/exploration games, if we were to take a multi-player death-match level from a game like Quake , we would see that the level s flow is much closer to that of a strategy game. That is, exploring the level is less important and combat can take place in completely unpredictable ways all over the map. Indeed, many players of multi-player death-match games will find a map they like and stick to it, at least for a while. Players will need to have explored the map thoroughly before they actually have a chance of winning a death-match on that map, certainly when playing with more experienced players. Exploration and memorization of the map may be an integral part of the metagame in that such exploration leads to the players victory in future games, but the exploration is only a means to an end, not an end in and of itself, unlike in a single-player game where exploration is a big part of the fun.

Sandbox style games like Grand Theft Auto , The Getaway , or True Crime are interesting in how they combine elements from RPG, strategy, and death-match level flows. In them, players need to go to different locations to get missions from people, often covering ground they have traveled previously to get there, much like in an RPG. And like a strategy game, the action and combat sequences can flow all over the map depending on where the battle happens to go. Finally, like a death-match map, players will only start excelling in the game once they have memorized the city streets and are thereby able to get to locations more quickly.

With the exception of racing games, sports games typically provide a very non-linear-flow to their gameplay. The flow of a basketball game s levels more closely resembles a death-match or strategy game s levels than an action/exploration game s maps. Action takes place all over the level or court , with the players movement flowing back and forth across the level, covering the same ground but in unique and unpredictable ways. Exploring the level is relatively unimportant, as the shape of the level is completely simple and typically the entire court or a very large chunk of it is on screen at once.

In a racing game, players move from a distinct start location to a distinct end location. This movement is quite similar to an exploration-oriented action game such as Doom , with the key differences that typically the race s start and end locations are the same (the track loops ) and usually the race- path is repeated multiple times before the level is over. Though there is a good deal of non-linearity in terms of the gameplay and how players race against their opponents, the level flow is even more linear than in an action/adventure title. Modern racing games such as Project Gotham Racing or Cruisin World incorporate some of the exploration elements of action/exploration games by making the levels look visually stunning and varied, making the first time players round a corner an aesthetically thrilling experience. Older racing games (such as the venerable Pole Position ) relied more on the challenge of navigating the track to entertain players rather than the thrill of racing through new, fantastic locations. Many more modern racing games also include alternate paths or shortcuts that players can take for varied gameplay results. The SSX games, which are racing games despite not involving cars , are particularly good at providing a wide variety of secret paths for players to explore. The flow is still in the same general direction, but some branching allows players to concentrate on more than just how tightly they can take a given corner.

From my discussion of these gaming genres and the way that gameplay flows on their respective levels, one could divide the games into roughly two groups: those with more linear levels (action/adventure, role-playing, and racing games) and those with more non-linear, unpredictable gameplay experiences (strategy, sports, and multi-player death-match games). Of course, that is not to say that the two do not overlap. For instance, specific StarCraft levels do everything to encourage players to play them in a specific path, especially the small-team indoor levels. Similarly, many Super Mario 64 maps allow for multiple viable paths players can use to play them through. If the designer is creative enough in her efforts, the distinction between the two types of levels can be blurred, which can often lead to more varied and interesting gameplay.