RFID technology can be used not only to identify and track single objects, but also to locate these objects within a specific area with relatively high accuracy. This can be achieved by using real-time location systems (RTLS), which are based on active RFID technology.

In a retail distribution center, exception processing increased by 20 percent within a two-week period. The local manager cross-referenced advanced shipping notice with received goods and identified that the increase in the exception processing was due to nonfunctioning tags on products from vendor A. Vendor A started to research the malfunctioning tags but found out only that they were successfully read on departure bound to the distribution center. The distribution center contacted the RFID integrator, explained the situation, and asked them to identify the problem. The RFID integrator asked for the diverted product to be set aside. After a series of tests, the integrator found out that the tags on the diverted product were functioning, but the tag protocol was EPC Class 1 Generation 2, which had yet to be integrated into the current infrastructure of the distribution center by upgrading the reader firmware.

There are several ways of locating an item by using RTLS. One method that is currently used is triangulation (see Figure 6.1). Triangulation is based on measuring the distance between the tag and three access points (RFID interrogators), which are positioned around a specific area. In reality, there are many access points in the area that create a matrix. 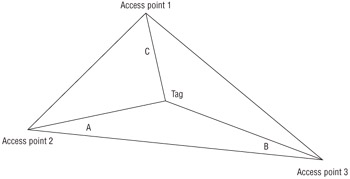 When the tag sends a signal to the environment (beacons), the distance between a tag and an access point is calculated based on the time it took the signal to travel from the tag to this access point. When the distances between the tag and each of the access points are known, the area is divided into a group of triangles, and the tag's position can be calculated using trigonometry.

Of course, there is more than one way to locate the tag. Using a time response system works similarly to triangulation. The tag sends a signal to the environment, and the tag location is calculated based on the difference in time it took the signal to travel from the tag to each access point. This principle is called differential time of arrival (DTOA).

RTLS is often compared to a global positioning system (GPS) because of its locating capabilities. However, locating objects through GPS requires a line of sight to a satellite; therefore, it cannot be used in buildings or underground. RTLS is not restricted by satellite but uses its own access point matrix, which can be located virtually anywhere.

As with any RF-based technology, the signals can be reflected, absorbed, or distorted by various environmental conditions and RF interference, which would corrupt the distance measurements and the precision of the system. For this reason, most RTLS providers certify an accuracy of 7 to 15 feet.