Trees and graphs are common data structures in programming, so they are both fair game in a programming interview. Trees, in particular, appear frequently because they enable an interviewer to test your knowledge of recursion and run-time analysis. Trees are also simple enough that you can implement them within the time constraints of an interview. Although graph problems are interesting, they are usually very complicated and do not lend themselves to interview problems. Therefore, the emphasis of this chapter is on trees.

Unlike Chapter 4’s use of C/C++ in the problems, in this and the subsequent chapters you’re going to use more modern languages like C# and Java. This means you’ll be creating classes to properly encapsulate your code and you generally won’t be using pointers anymore.

A tree is made up of nodes (data elements) with zero, one, or several references to other nodes. Each node has only one other node referencing it. The result is a data structure that looks like Figure 5-1. 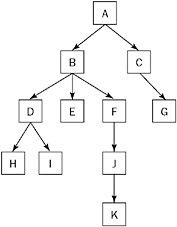 As in a linked list, a node is represented by a structure or class, and trees can be implemented in any language that includes pointers or references. In object-oriented languages you usually define a class for the common parts of a node, and one or more subclasses for the data held by a node. For example, these are the C# classes you might use for a tree of integers:

In this definition, children is an array that keeps track of all the nodes that this node references. Note that for simplicity we exposed the children as public data members. A proper class definition would make them private and expose methods to manipulate them. A fuller Java equivalent (with methods and constructors) to the preceding classes would be as follows:

Even this example is not complete, however, because there is no error handling and no way to dynamically add or remove nodes from a tree. During an interview you may want to keep things simple by using public data members, folding classes together, or by only sketching out the various methods that are needed to manage the tree. For the latter, you could also define an interface instead of a base class and not bother defining the methods. Ask the interviewer how much detail is wanted and design your code accordingly. If the interviewer provides no guidance, be sure to explain your choices as you go along.

Looking at the tree shown in Figure 5-1, you can see that there is only one top-level node. From this node, it is possible to follow pointers and reach every other node. This top-level node is called the root. The root is the only node from which you are guaranteed to have a path to every other node. The root node is inherently the start of any tree. Therefore, people will often say “tree” when talking about the root node of the tree.

Following is some additional tree-related vocabulary:

So far, you’ve been using the most general definition of a tree. In practice, when an interviewer says “tree,” he or she usually means a special type of tree called a binary tree. In a binary tree, each node has no more than two children, commonly referred to as right and left. Figure 5-2 shows an example of a binary tree.

Here’s a simple implementation of a binary tree. For simplicity, we combine everything into a single class:

When an element has no left or right child, the corresponding reference is null.

BSTs are so common, in fact, that many people mean a BST when they say “tree.” Again, ask for clarification before proceeding.

One advantage of a binary search tree is that the lookup operation (locating a particular node in the tree) is fast and simple. This is particularly useful for data storage. In outline form, the algorithm to perform a lookup in a BST is as follows:

If you fall out of the loop, the node wasn’t in the tree.

Here’s one way to code the search in C# or Java:

This lookup is a fast operation because you eliminate half the nodes from your search on each iteration by choosing to follow the left subtree or the right subtree. In the worst case, you will know whether the lookup was successful by the time there is only one node left to search. Therefore, the running time of the lookup is equal to the number of times that you can halve n nodes before you get to 1. This number, x, is the same as the number of times you can double 1 before reaching n, and it can be expressed as 2x = n. You can find x using a logarithm. For example, log2 8 = 3 because 23 = 8, and so the running time of the lookup operation is O(log2(n)). It is common to omit the base 2 and call this O(log(n)). log(n) is very fast. Consider that log21,000,000,000 ( 30. Logarithms with different bases differ by a constant factor, so the base is ignored in big-O notation.

Note one caveat to saying that lookup is O(log(n)) in a BST. Lookup is only O(log(n)) if you can guarantee that the number of nodes remaining to be searched will be halved or nearly halved on each iteration. In the worst case, each node has only one child. In such a case, you have a linked list because each node points to only one other node. Lookup then becomes an O(n) operation just as in a linked list. The good news is that there are ways to guarantee that every node has approximately the same number of nodes on its left side as its right. A tree with approximately the same number of nodes on each side is called a balanced tree.

Without going into too much detail (as the special cases get very nasty), it is also possible to delete and insert into a balanced BST in O(log(n)) time.

Binary search trees have other important properties. For example, it is possible to obtain the smallest element by following all the left children, and to obtain the largest element by following all the right children. The nodes can also be printed out, in order, in O(n) time. It is even possible, given a node, to find the next-highest node in O(log(n)) time.

Tree problems are often designed to test your ability to think recursively. Each node in a tree is the root of a subtree beginning at that node. This subtree property is conducive to recursion because recursion generally involves solving a problem in terms of similar subproblems and a base case. In tree recursion you start with a root, perform an action, and then move to the left or right subtree (or both, one after the other). This process continues until you reach a null reference, which is the end of a tree (and a good base case). For example, the preceding lookup operation can be reimplemented recursively as follows:

Another common tree is a heap. Heaps are trees (usually binary trees) with a twist: Each child of a node has a value less than or equal to the node’s own value. (The data implementation of a heap, however, can be different from what we discussed previously.) Consequently, the root node always has the largest value in the tree, which means that it’s possible to find the maximum value in constant time: Simply return the root value. Insertion and deletion are still O(log(n)), but lookup becomes O(n). It is not possible to find the next-higher node to a given node in O(log(n)) time or to print out the nodes in sorted order in O(n) time as in a BST.

It’s nice when you have a tree with ordering properties such as a BST or a heap. Often you’re given a tree that isn’t a BST or a heap. For example, you may have a tree that is a representation of a family tree or a company job hierarchy. You have to use different techniques to retrieve data from this kind of tree. One common class of problems involves searching for a particular node. Two very common search algorithms are used to accomplish this task.

One way to search a tree is to do a breadth-first search (BFS). In a BFS you start with the root, move left to right across the second level, then move left to right across the third level, and so forth. You continue the search until either you have examined all of the nodes or you find the node you are searching for. The time to find a node is O(n), so this type of search is best avoided for large trees. A BFS also uses a large amount of memory because it is necessary to track the child nodes for all nodes on a given level while searching that level.

Another common way to search for a node is by using a depth-first search (DFS). A depth-first search follows one branch of the tree down as many levels as possible until the target node is found or the end is reached. When the search can’t go down any farther, it is continued at the nearest ancestor with unexplored children. DFS has much lower memory requirements than BFS because it is not necessary to store all of the child pointers at each level. In addition, DFS has the advantage that it doesn’t examine any single level last (BFS examines the lowest level last). This is useful if you suspect that the node you are searching for will be in the lower levels. For example, if you were searching a job hierarchy tree looking for an employee who started less than three months ago, you would suspect that lower-level employees are more likely to have started recently. In this case, if the assumption were true, a DFS would usually find the target node more quickly than a BFS.

There are other types of searches, but these are the two most common that you will encounter in an interview.

Another common type of tree problem is called a traversal. As opposed to a search, where you look for a particular node and stop when you find it, a traversal visits every node and performs some operation on it. There are many types of traversals, each of which visits nodes in a different order, but you’re only likely to be asked about the three most common types of traversal for binary trees:

These traversals can also happen with nonbinary trees as long as you have a way to classify whether a child is “less than” (on the left of) or “greater than” (on the right of) its parent node.

Recursion is usually the simplest way to implement a traversal. See the problems in the chapter for some examples.

The Google Resume: How to Prepare for a Career and Land a Job at Apple, Microsoft, Google, or any Top Tech Company