At first glance, routers seem a lot like a PC. They have a CPU; memory; and, on the back, ports and interfaces to hook up peripherals and various communications media. They sometimes even have a monitor to serve as a system console.

But there's one defining difference from a PC: routers are diskless. They don't even have floppy disks. If you think about it, this makes sense. A router exists to do just that: route. They don't exist to create or display the data they transport. Routers have as their sole mission the task of filtering incoming packets and routing them outbound to their proper destinations.

Another difference is in the kind of add-on modules that can be plugged into routers. Whereas the typical PC contains cards for video, sound, graphics, or other purposes, the modules put into routers are strictly for networking (for obvious reasons). These are called interface modules, or just plain interfaces. When people or documents refer to a router interface, they mean an actual, physical printed circuit board that handles a particular networking protocol. E0 and E1, for example, probably mean Ethernet interface numbers 1 and 2 inside a router. There is one protocol per interface.

Interfaces are added according to the network environment in which they will work. For example, a router might be configured with interface modules only for Ethernet. A router serving in a mixed-LAN environment, by contrast, would have interfaces for both the Ethernet and Token Ring protocols, and if that router were acting as a LAN-to-WAN juncture, it might also have an ISDN module.

Routers use various kinds of memory to operate and manage themselves. There are many variations on what the internals of a router look like (based on what they do and how they do it). Figure 3-16 depicts the layout of a motherboard in a Cisco router. This is a classic "old school" router with a good layout for identifying the various parts of a router. All Cisco router motherboards use four types of memory, each dedicated to performing specific roles. 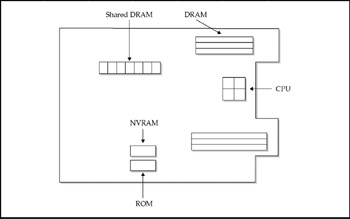 RAM/DRAM stands for random access memory/dynamic random access memory. Also called working storage, RAM/DRAM is used by the router's central processor to do its work, much like the memory in your PC. When a router is in operation, its RAM/DRAM contains an image of the Cisco IOS software, the running configuration file, the routing table, other tables (built by the router after it starts up), and the packet buffer.

Don't be thrown by the two parts in RAM/DRAM. The acronym is a catch-all. Virtually all RAM/DRAM in Cisco routers is DRAM-dynamic random access memory. Nondynamic memory, also called static memory, became obsolete years ago. But the term RAM is still so widely used that it's included in the literature to avoid confusion on the subject.

Cisco's smallest router, the SOHO 90 Series, ships with a maximum of 64 MB of DRAM. At the other end of the spectrum, the CRS-1 router, one of Cisco's largest, supports up to 4 GB.

Flash memory is also nonvolatile. It differs from NVRAM in that it can be erased and reprogrammed as needed. Originally developed by Intel, flash memory is in wide use in computers and other devices. In Cisco routers, flash memory is used to store one or more copies of the IOS software. This is an important feature, because it enables network managers to stage new versions of IOS on routers throughout an internetwork and then upgrade them all at once to a new version from flash memory.

ROM stands for read-only memory. It, too, is nonvolatile. Cisco routers use ROM to hold a so-called bootstrap program, which is a file that can be used to boot to a minimum configuration state after a catastrophe. When you boot from ROM, the first thing you'll see is the rommon>> prompt. ROMMON (for ROM monitor) harks back to the early days of the UNIX operating system, which relied on ROMMON to reboot a computer to the point at which commands could at least be typed into the system console monitor. In smaller Cisco routers, ROM holds a bare-bones subset of the Cisco IOS software. ROM in some high-end Cisco routers holds a full copy of IOS.

Internetworking can be intimidating, with the seemingly endless combinations of products, protocols, media, feature sets, standards-you name it. The acronyms come so fast and so hard that it might seem hopeless to learn how to properly configure a router. But choosing the right router product can be boiled down to manageable proportions. Table 3-4 lays out five major requirement areas that, if met, will lead you to the best router solution.

Cisco's router product-line structure tries to steer you to a product-or at least to a reasonably focused selection of products-meeting all five requirement areas in Table 3-4.

Finding the right router for your needs is basically a three-step process. The following illustrates the process of selecting a router for a large branch office operation: 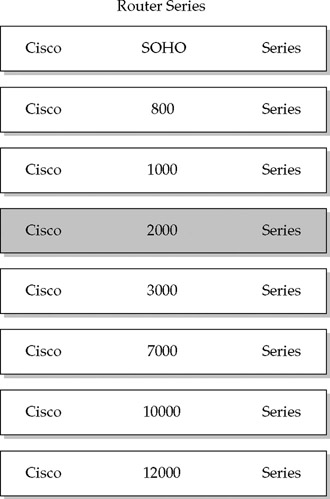 First, Cisco's routers are grouped into product families called series. Choosing a router product series is usually a matter of budget, because each series reflects a price/performance tier. Models within series are generally based on the same chassis, which is the metal frame and basic components (power supply, fans, and so on) around which the router is built. We'll select the Cisco 2000 Series because it fits both the purchase budget and performance requirements for our large branch office. 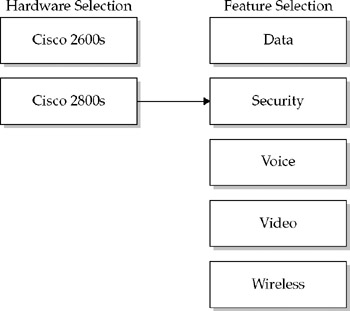 From the 2000 Series, we'll take the Cisco 2800 Series. The 2800 chassis is versatile enough to fit a lot of situations, making it a popular brand of branch office router. 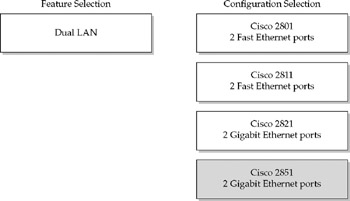 Third, we'll select the Cisco 2851 because it has two Ethernet ports; and our imaginary branch office will operate two subnets, one for the customer service office and another for the front office. The two Ethernet ports will let us separate the two departments, thereby isolating traffic.

Three major categories of modules can be configured into Cisco routers to support either LAN or WAN connectivity:

Configuration options depend mainly on the specific Cisco router:

Cisco offers different routers for different environments. For example, an ISP won't be too successful with a router that can only accommodate four or five users. Likewise, a small office doesn't need a $500,000 terabit router. The following explain the different types of routers Cisco offers.

SOHO is an industry term for very small network users-small office/home office. Typical SOHO customers have only one or two LAN segments in their facility and an ISP connection to the Internet.

The linchpin of Cisco's SOHO strategy is low-end routers. Allowing small companies to tap into ISPs router-to-router instead of as dial-in users saves money on telephone connections, upgrades performance, and improves reliability. Table 3-5 outlines Cisco's SOHO product series. The term series here means a chassis that is variously configured at the manufacturing plant into several product models-usually depending on the printed circuit cards installed in them.

The smallto medium-sized network requires a wide variety of solutions. Cisco has several tiers of access router products designed to fit the customer's capacity needs and type of telecom link.

The series in Table 3-6 represent dozens of individual product numbers. Depending on the product series, various combinations of LAN technologies and WAN media can be configured. Modular means that the chassis can be upgraded in the field by inserting one or more modules. Nonmodular devices are fixed in configuration.

When Cisco claims that over 70 percent of the Internet is run using its routers, these are the models they're talking about. The 7000 and 12000 series are big, resembling dorm refrigerators in shape and size, and have data buses into which blades (whole devices on a board) can be installed.

Because they're not access routers, Cisco's backbone routers can take as many users as they can handle packets. All seven product series (described in Table 3-7) are modular, letting customers install modules according to the LAN technology being run and the capacity needed. In fact, these routers can operate more than one protocol simultaneously, such as Ethernet and Token Ring. A slot is an electronic bay into which a printed circuit board module is inserted.

There is a specialized high-speed connection used on the high-end Cisco routers. HSSI stands for high-speed serial interface, a specialized I/O standard mainly used in conjunction with supercomputers. The behemoth Cisco 12000 router and uBR10012 router are carrier-class devices, in that local equipment carriers' telecommunications network operators use them in their back-office data-switching operations.

All the backbone Cisco routers have extensive capabilities for VPN, security, quality of service (QoS), and network management.