When you render images to a drawing surface, you need an object to actually do the drawing. GDI+ provides two objects: the Pen and the Brush. (Makes sense, don't you think?) The Pen type is used to draw the outline of a shape, and the Brush type fills in an enclosed shape.

You've all worked with a pen, so the idea of what a pen does shouldn't be hard to visualize. Normally, you use a pen to draw the outline of the object. Most likely, you draw a solid line, but sometimes you might use a sequence of a bunch of dots and dashes. When you're drawing a line between two objects, you probably will put an arrow on one or both ends. If you like variety, you might even use a red or blue pen along with your black one.

Or if you want the Pen to be only 1 graphics unit thick, you could use the even easier:

Notice I used the term "graphics unit." The Pen type's thickness is based on the graphics unit, not pixels, though the default is pixels.

System pens are virtually the same as named pens, except that instead of a pen being named after a color, it is named after the role that the Pen would use on the Windows GUI interface. Also, you will find system pens in the SystemPens class and not in the Pens class.

Figure 11-12 shows one instance of DrawingLines.exe running. I doubt you will ever see the same combination of lines being displayed twice. 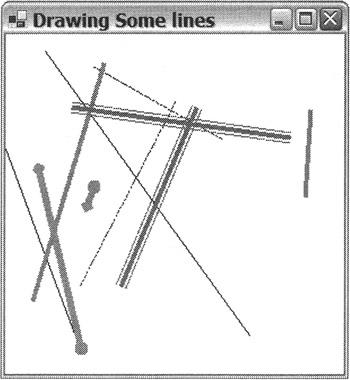 The preceding code is pretty self-explanatory, with the help of the embedded comments, except for two things. The first is that you need to add the System::Drawing::Drawing2D namespace. This namespace defines both the DashStyle and LineCap classes.

The second is the code that implements the CompoundArray property. This property splits a single line into multiple parallel lines. It does this by taking the width of a line and defining some portions as visible and other portions as not visible. The basic idea is, starting at 0 percent, find the first percent value that the line will be visible and write that into a Single area, and then find the percent where it becomes invisible again and write that value into the area. Repeat the process for all the parallel sublines that make up the full area, stopping at 100 percent.

If you want to define the entire line width as being visible (a waste of time, by the way), the array will look like this:

If you want to define the top half of the line as visible and the bottom as invisible (again, a waste of time), the array will look like this:

If you want the top 10 percent and the bottom 10 percent only to be visible, the array will look like this:

Notice that the compound array always has an even number of elements.

You can also create named brushes and SystemBrushes. The Brushes class will fill a shape like the SolidBrush class. The only difference is that the brushes are predefined with names based on named colors.

SolidBrush, HatchBrush, and TextureBrush are not the only brushes available, but I cover only them to give you some ideas on how to work with brushes.

The SolidBrush class is the easiest of the brushes. All it takes in its constructor is the color that you want to fill the shape with. Its only property with any relevance is the color you used in the constructor.

The constructor is a little more complicated too, as you need to pass the HatchStyle and two colors, the first being the foreground hatch color and the second being the background color.

A TextureBrush class allows you to place an image in the brush and then use it to fill in shapes. The best part of TextureBrush is how little code is needed to get it to work. The basic tasks behind the creation of a TextureBrush are loading the image and then placing it in the brush:

Because I haven't covered images yet, I defer their explanation until later in the chapter. But as you can see in the preceding constructor, once you have an image available, it is a simple process to place it into a TextureBrush.

But that is not where the story ends. What happens if the brush is smaller than the shape it is trying to fill? The TextureBrush provides a WrapMode parameter (see Table 11-14) in the constructor (and also a property) to determine what to do—either clamp it or tile it. Clamping means that only one copy of the image is drawn, and tiling means that the image is repeatedly drawn until the area is filled.

There is one more piece of the puzzle. The first brush starts in the upper-left corner of the control you are drawing in. Thus, if you are filling a rectangle, for instance, and you want the brush to start in the upper-left corner of the rectangle, then you need to call the Brush class's TranslateTransform() method to translate the brush to start at that location:

Listing 11-13 shows the tiling of the TextureBrush using WrapMode::TileFlipXY. It also shows how to translate the starting point of the tiling to the upper-left corner of the shape you are trying to fill.

Listing 11-13: Filling with a TextureBrush 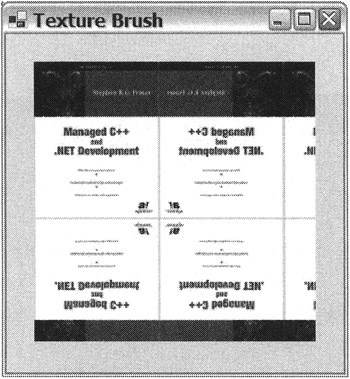