The full version of this product, called Microsoft Operations Manager 2005, is designed for larger organizations, and each of the main components can be separated and scaled across multiple computers, if required, to improve availability. However, administrators who plan to monitor fewer than 200 computers can choose to install all Microsoft Operations Manager 2005 components on a single computer that is appropriately sized and configured.

Microsoft Operations Manager (MOM) 2005 comprises a number of components, which collectively are referred to as a management group. Although additional components are available for certain scenarios, we will examine the following core components of the management group:

The specification defining which information to collect and the location of the required logs is contained within the Management Pack and then downloaded to the agent application that Microsoft Operations Manager 2005 deploys to gather the information.

There are three types of users who will use Microsoft Operations Manager 2005, and the user interfaces have been designed to cater to each of these groups:

Users can connect to and use the management server from a console-based user interface, which typically will not be running on the management server itself, but on a standard desktop computer elsewhere. There are four main consoles provided, each of which is used to perform different tasks.

The Administrator Console (shown in Figure 13-9) is a Microsoft Management Console (MMC) interface used by the Administrators and the Authors groups to manage and configure the Microsoft Operations Manager 2005 monitoring environment. These management and configuration tasks include the setup and configuration of management groups; adding and removing computers from management groups; deploying agents to managed computers; importing new Management Packs; and modifying the monitoring rules and criteria. The Information Center windows provide easy access to each of these areas. 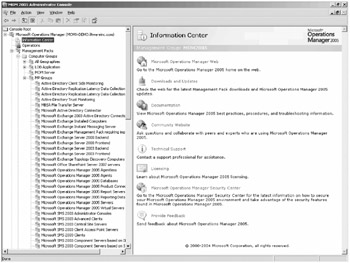 The Operator Console is used by the Administrators and the Operators groups to monitor the health of managed systems, discover solutions, and perform troubleshooting tasks using the range of tools that can be integrated with the console. This is where a lot of the power and the value that Microsoft Operations Manager 2005 delivers can be realized.

In a large organization, the operators might be delegated administrative responsibility for monitoring and maintaining the health of a specific type of server or line-of-business application-for example, the SharePoint server farms. Rather than require them to access the Microsoft Operations Manager 2005 server directly, you can install the Operator Console to the operators' desktops. Additionally, to reduce the amount of training required, the user interface has been designed to look similar to the familiar Microsoft Office applications, such as Microsoft Office Outlook 2003.

To make it as easy as possible for you to discover a solution, the Operator Console usually provides more than one route to follow through the user interface to find information, start a task, or change a configuration. Also, common tasks are usually automated using wizards and step-through dialog boxes to ensure that progress is made toward a goal.

The starting point for operators is to check on the aggregated views of alerts that have been received from the Microsoft Operations Manager 2005 agents on the managed servers, allowing operators to easily monitor the status of individual servers or server groups, as shown in Figure 13-10. 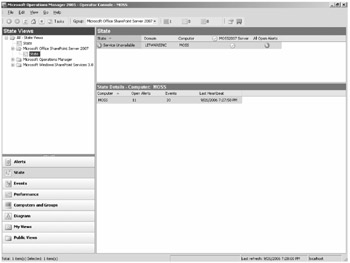 Any of the alerts can quickly be investigated by double-clicking the alert message in the list. This also displays detailed product knowledge and best practices that describe why the alert was sent, the probable cause if there was a problem, and advice on how to resolve the problem. Figure 13-11 shows an example of alert details concerning a problem with the Search service. 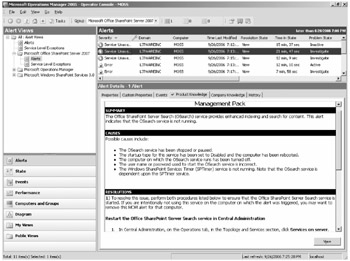 A large number of tools and scripts can be built in to the Operator Console Tasks pane, meaning that operators can immediately take action to resolve a problem by running a tool without leaving the console. Company-specific knowledge, tools, and scripts can also be added to tailor the Operator Console to each customer environment. An example of the troubleshooting tools that can be made available in the Tasks pane is shown in Figure 13-12. 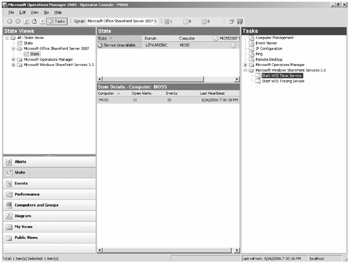 Figure 13-12: The Operator Console showing the Tasks pane with an array of troubleshooting tools

Figure 13-13 shows how the Operator Console can automatically generate network topology diagrams based on the live system. These diagrams can assist the operator in understanding the wider environment and the relationships between systems that could affect the managed computers that they are interested in. The diagram in Figure 13-13 shows the topology of the Active Directory servers as an example. 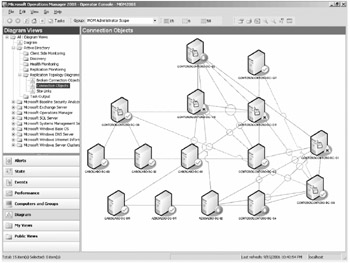 An optional component of Microsoft Operations Manager 2005 is the Reporting Server. This feature requires that SQL Server Reporting Services be available, but the payoff is well worth it, as the range of predefined health and status reports you can generate using this component can represent great value to you in your monitoring efforts. Lists, charts, and graphs can be drawn based on a user-defined date range of historical status and performance data. The Reporting Console (shown in Figure 13-14) is Web-based, which means that the reports can be made available to a much wider audience-including IT staff, analysts, and managers-without needing to install a client to the desktop. The SharePoint Server 2007 Management Packs do not provide any additional SharePoint-specific reports, but existing report templates can be used to report on aspects such as bandwidth utilization and service availability for SharePoint servers and other systems that can affect SharePoint. 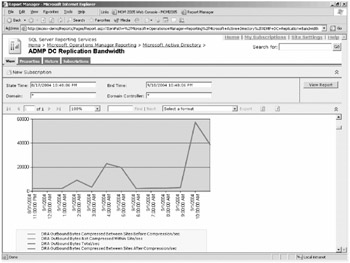 The core alert-monitoring features available through the Administrator and Operator Consoles can also be made available via a Web browser without installing the full console user interfaces-a nice touch that allows users the ability to use Microsoft Operations Manager 2005 even if they are away from their usual desktop computer. Figure 13-15 shows the Web Console running in Internet Explorer. 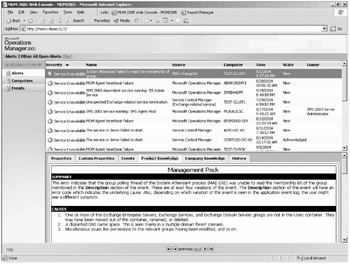 After agents have been installed onto managed computers, a monitoring solution still would not be very useful if it simply collected every available piece of information. The operators would be drowned in data, and the useful information would be difficult to isolate. A MOM Management Pack is a collection of rules and product knowledge that elevates MOM from being an event log repository into an expert system able to deliver insight and analysis. We will examine Management Packs in more detail in the next section.