This is where Team Foundation Server enters the picture. It provides one tool that easily and effectively allows all the different roles on the team to work together. By facilitating effective communication between team members, it improves project productivity and success.

Let's look at some of the ways Team Foundation Server will help your team members communicate better. While we covered some of these topics in detail earlier in the book, it's worth another look here.

Using the Team Foundation Object Model, you can solve the problem of team members working in multiple platforms. In fact, a Microsoft partner company called Teamprise (www.teamprise.com) has already solved this problem for you. Many enterprises do Java development in addition to .NET development. Teamprise has developed a Team Foundation Server client that is written entirely in Java. The advantage of this approach is that it will run from any location that has a suitable Java Runtime Environment (JRE) such as Linux, Unix, Solaris, Windows, and even Mac OS X.

Figure 14-1 shows how the Teamprise plug-in looks within the Eclipse IDE on Windows. 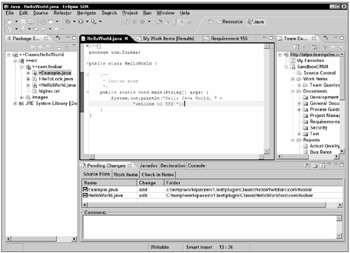 Besides the Eclipse plug-in, Teamprise also provides a cross-platform standalone client for Team Foundation Server, similar to Team Explorer. This client provides most of the same abilities as Team Explorer, but, as with the Eclipse plug-in, it runs on multiple platforms. Teamprise also provides a command-line client similar to the one that comes with Team Foundation Server. This client could be highly useful in a Unix or Linux environment, particularly when used in automating builds.

In previous chapters, you learned about TeamPlain from devbiz Business Solutions (www.teamplain.com). It provides a nice way to access the work item tracking system of Team Foundation Server through a Web browser. This product, built off the Team Foundation Object Model, allows users on multiple platforms to leverage their Team Foundation Server for maximum use. Figure 14-2 shows a screenshot of this Web application. 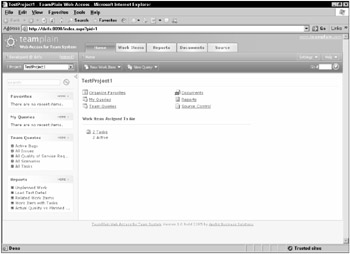 Also, recall that in Chapter 11 you built a very simple Web application for accessing the work item tracking system. This is another example of extending Team Foundation Server across multiple platforms. Please refer to that chapter for the details of that application.

The business analyst begins defining requirements in Team Foundation Server, using scenario work items. To create these work items, he opens Team Explorer, navigates to the appropriate team project, right-clicks on the Work Items folder, and selects Add Work Item⇨Scenario. This opens a new scenario work item. As he creates these work items, he assigns them to the project manager, by selecting the manager's name in the Assigned To field of the Status section of the form.

Each developer runs the "My Work Items" query to see what work items he has been assigned in Team Foundation Server. Seeing the new work items that were created by the project manager, they begin their work. The next day, one of the developers leaves the company. The project manager opens his project plan, begins to reassign work items to developers, and syncs again with Team Foundation Server. Now, when developers pull their list of work items to work on the next day, their schedules will be automatically adjusted to take into account the missing developer.

As you can see, having a central repository for all the information related to the project really does play a crucial role in providing effective communication among team members. The integration with tools that team members are used to using, such as Microsoft Project, the work item tracking system, and the version control system, all play a vital part in increasing the power of communication within the team.