The first decision you must make when planning a backup strategy is where you intend to store your data. Windows 2000 Backup supports magnetic tape, the traditional backup medium, but it can also archive your data to a backup file that you can store on any device addressable by the Windows 2000 file systems, including cartridge drives (such as Iomega Zip and Jaz drives), floppy disks, and even recordable CD-ROMs. For more extensive archiving, Windows 2000 Backup also supports the use of media pools—that is, libraries of disks or tapes that you access through a jukebox or autochanger. The medium you choose should depend on your budget, the amount of data you have to back up, and how much time you have available for creating the backup.

Estimating the cost of a backup storage medium isn't simply a matter of pricing tape drives and disk drives. The cost of the recording medium is also an important consideration. For example, a magneto optical drive like the Jaz that holds 2 GB might seem like a bargain, but the cartridge it uses can cost as much as $200, or 10 cents per megabyte. In contrast, you can find recordable CD-ROM (CDR) for well under $1, at a cost per megabyte of about 15 hundredths of a cent. Tape media prices per megabyte tend to fall somewhere between these two extremes. Remember, too, that a CD-R or cartridge drive solution is useful for other storage besides backups, while a tape drive can be used for nothing else.

The Removable Storage service has its own user interface, separate from Windows 2000 Backup, in the Computer Management snap-in for the Microsoft Management Console (MMC), as shown in Figure 34-1. You use this tool when you need to send commands directly to a tape drive or other device, such as when you want to eject, format, or retension a tape. 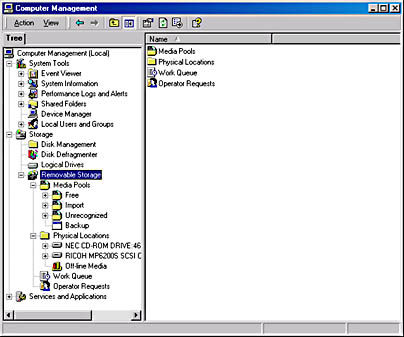 Figure 34-1. The Removable Storage service on the Computer Management snap-in.

Backing Up to Files

As an alternative to backing up by using a device registered in the Removable Storage service, you can also back up system data to a file. Windows 2000 Backup can create the file on any writable storage device addressable by using a standard drive letter, such as a hard disk, cartridge, or floppy disk drive. By default, the backup file has a .BKF extension, but you can name the file anything you want and store it on any supported device.

Because of their extremely low media cost, recordable CD-ROMs can be an excellent storage medium for system backups. Two types of writable CD-ROMs are commonly used: CD-Rs, which are WORM (write once, read many) devices, and CD-RWs, which you can write to many times. Using CD-Rs for backups might seem wasteful because you can fill them only once, but blank disks are cheap enough to make this feasible. As an added benefit, you get a permanent archive of your system, eliminating the need to develop a media rotation system and keep track of how many times you have used a particular tape or cartridge.