As Chapter 9 explained, CRT monitors are analog devices that use a continuous stream of electrons to create an image. The graphics controller uses a digital-to-analog converter (the RAMDAC) to generate an analog signal from the digital bitmap produced by the graphics processor.

A CRT monitor has three important elements: the electron gun at the back of the picture tube, a shadow mask or aperture grill, and a glass surface covered with phosphor dots. This is exactly the same technology used by traditional television sets with picture tubes.

To understand how this creates a picture, imagine a light bulb in a desk lamp or a ceiling fixture. When electricity passes through the filament of that bulb, the filament gives off a continuous stream of energy in the form of light and heat. In a CRT, the filament (also known as the cathode) also gives off energy, but that energy is a focused stream of electrons (that's the ray part). Because the cathode aims the rays at specific points, it's known as an electron gun. When those electrons strike the phosphors inside the glass screen, the phosphors, arranged in groups of red, green, and blue dots or bars, light up. The color that appears on that portion of the screen depends on the intensity of the electron stream and the way the red, green, and blue phosphors combine to create other colors. Figure 11.1 shows a cross section of a CRT. 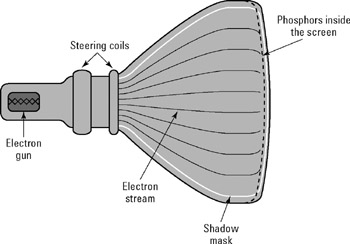 Figure 11.1: The electron gun at one end of a CRT streams electrons at a screen at the other end. The coils around the neck of the tube steer the electron stream to cover the entire screen.

The shadow mask (an opaque sheet with tiny holes in precise locations) or aperture grill (a set of thin vertical wires) is located very close to the screen. The holes or wires are aligned with the dots or bars to assure that each one has a precise shape. Without a mask, light from the beam could spill over to nearby dots and smear the image.

Now a beam illuminates one spot in the center of the CRT's screen. How does that beam scan across the screen from left to right and from top to bottom to create a complex picture? There are two coils of copper wires around the neck of the CRT that use magnetic fields to steer the beam-one coil for horizontal motion and the other for vertical motion. There's a precise combination of voltages to the two steering or deflection coils that corresponds to every dot on the screen.

The graphics controller breaks the image into red, green, and blue bitmaps and sends each image to the monitor through a separate wire in the cable that connects the controller to the monitor. Two more wires provide the horizontal and vertical synchronization signals. Circuitry within the monitor uses those sync signals to match the refresh rate and the screen resolution to the CRT's scan rate.

Put this all together and you have a beam that moves across the screen many times every second to relay the bitmap from the graphics controller to the surface of the CRT's screen. Your eye and brain do the rest, combining those millions of tiny dots into a coherent picture.