Sound cards range from simple built-in features to elaborate two-piece devices with physical control panels that mount into a 5 1/4-inch drive bay. The basic purpose of sound cards is to allow the user to hear sounds played by the OS and programs, along with music from audio CDs and other audio files, plus sound from DVD and other types of videos. In addition, these allow for voice communication using software such as Yahoo Messenger, AOL Instant Messenger, and Windows Messenger, along with Internet telephone calls, voice-recognition software, and other uses.

Sound cards are physically installed and removed in the same way as any other card using the same interface (PCI or ISA), except that there are likely to be analog audio cables connected to it inside the computer. On a motherboard with onboard sound, there will also be audio connectors. These connectors are for connecting analog audio to optical drives, modems, and other devices. Some of these connectors are polarized, but even if they aren't, the worst that can happen is that the right and left audio channels could be reversed. Figure 8.4 shows the audio connectors on a sound card. 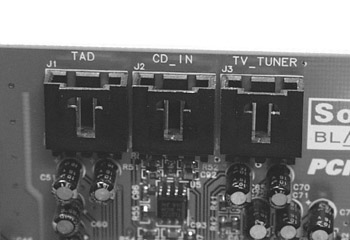 Sound cards can vary as to the number and type of external inputs and outputs. The most basic, usually found on motherboards with built-in sound, have three:

Microphone input: This is for a computer microphone, although battery- powered condenser mics usually work in these jacks.

Line input: This is for an external line source such as a cassette deck or CD player's line outputs.

A sound card with a built-in amplifier would have full-power speaker outputs, able to drive most non-amplified speakers. More advanced cards have a whole assortment of inputs and outputs. On many cards, the icons that identify each jack are very difficult to see and interpret, especially when you are struggling just to see any part of the back of the computer. Consult the manufacturer's documentation. Figure 8.5 shows sound card jack panels. 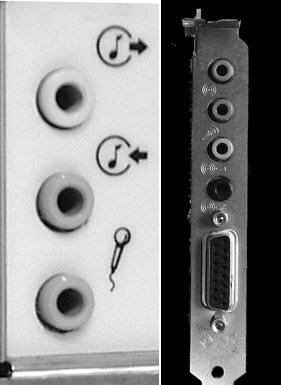 Now look carefully at Figure 8.5. The concentric arcs represent sound waves. An arrow pointing toward the center indicates a line input, while an arrow pointing away from the center represents a line output. The microphone and speaker icons are more illustrative than are the others.

There are a number of steps you can take to correct sound problems. First, make sure the speakers are powered, turned on, and turned up. Make sure all external connections are correct, and that the cables aren't damaged. Run System File Checker (see Chapter 11). Reinstall the sound drivers. Sometimes, you'll have to remove the device in Device Manager, shut down the computer, remove the card, restart the computer and uninstall any programs that came with the sound card, and then shut down the computer again. Then, follow the manufacturer's directions for installing the card, or just reboot and see if Windows will install it correctly. If you have any trouble with resource conflicts, which would be evidenced by instant lockups, go into the BIOS and make sure Plug and Play is enabled.