Connecting two ISA Server computers at different sites using encrypted traffic across an untrusted network to create a VPN connection is known as a site-to-site VPN configuration. This section explains how to create connections between two sites, called the primary site and the secondary site, as shown in Figure 11-9. The names of the ISA servers in each location in this example are P_ISA and S_ISA, respectively. 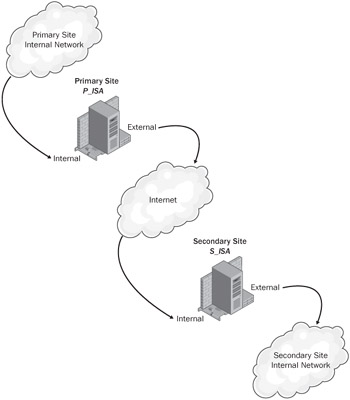 There are two prerequisites for creating a site-to-site VPN configuration:

In addition, you need to follow the steps described in this section to create a site-to- site VPN connection for each site:

Analyzing and Selecting the VPN Protocol 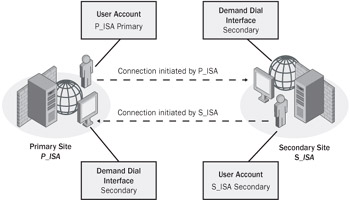 Figure 11-10: When setting up accounts for your VPN gateway, use the name of the remote VPN server's demand dial interface.

Do be sure to open the user account's properties, and set these options.

To complete the creation of the gateway, you create a remote site network, a network rule, and access rules that allow traffic between the two sites on the network.

To connect to another (secondary) VPN server across the Internet, you must define that remote network in ISA Server. The remote-site network is defined by a range of IP addresses specific to that site.

To configure a remote-site network, complete the following steps: 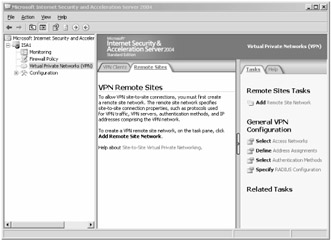 Figure 11-11: The Remote Sites tab allows you to configure site-to-site VPN connections. Use the Tasks pane to perform actions. 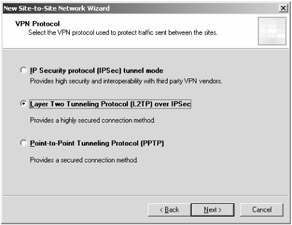 Figure 11-12: Depending on the VPN protocol you select, you will see different pages, as described next.

Figure 11-13: Depending on whether you're using the Enterprise Edition or Standard Edition of ISA Server, you will see this information in either a pop-up dialog box or as a page.

When the new network is created, review and define the network rules between the remote site network and the internal network. If you require two-way communication, you should designate a route relationship rather than NAT.

When using a route relationship, if you are using private addresses on both local area networks (LANs), ensure that the two networks do not have duplicate IP address ranges.

To configure the relationships between networks, complete the following steps:

By default, there is no access between the remote site network and the internal network. Create two access rules between the two networks, allowing only the protocols, computer sets, and so on, that are required for your environment.

Figure 11-14 shows the access rules that were created on the P_ISA computer in this example. All outbound traffic is allowed for all users in both cases—your access rules should be more specific based on your traffic requirements analysis and usage scenarios.

Figure 11-14: These rules allow all outbound traffic for all users—your access rules should be more specific based on your traffic requirements analysis and usage scenarios.

To configure the secondary site VPN gateway, you follow the same procedures as described earlier in "Creating the Primary Site VPN Gateway," and summarized in this section.

To establish a connection between the two sites, try the following tests:

Use the monitoring interface to help troubleshoot any connectivity problems.