ISA Server was developed to provide a true Open Systems Interconnection (OSI) Layer 7 firewall, which cannot only determine whether packets coming from the Internet are from allowed addresses, or that they are allowed packets, but can also open the content of packets such as Web (HTTP) traffic to see if any other malicious information is hidden in its payload—see Figure 1-1 for a comparison between standard firewalls and an application inspection firewall. This ability to inspect not just the packet headers, but the contents of packet, is much more advanced in ISA Server than in other firewalls. 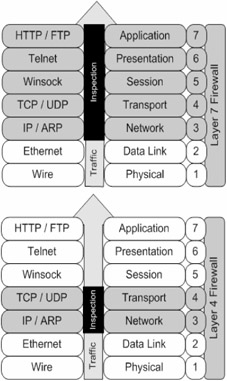 ISA Server specializes in being able to provide the most secure access to other Microsoft products, such as Exchange Server and Sharepoint Portal Server. ISA Server can also provide companies with the ability to improve users' experience when accessing Internet content by functioning as a proxy server. ISA will handle all requests for Internet traffic from internal users. Based on access rules that are defined within the ISA Console, you can allow or deny certain computers or users access to certain Web sites or types of Web content, and control the times that these rules apply. With the Enterprise Edition of ISA Server, you can set rules on a large number of different ISA servers from a single location, provide the ability to have several machines share high traffic loads, and distribute cached Internet content on different ISA servers based on mathematical algorithms.