You call a connection using Windows authentication a trusted connection.

The user name and password are submitted to SQL Server 2000 in clear text unless both the client and the server Net-Libraries are using SSL encryption for the entire session.

Table 10.1 compares the security capabilities of these two types of authentication. 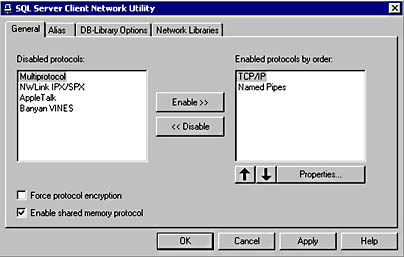 The simplest method for establishing an authenticated connection (other than logging on to the domain) is to connect to an existing share within the domain.

An instance of SQL Server 2000 running on Windows Me or Windows 98 only supports SQL Server authentication because of the limitations of these two operating systems. 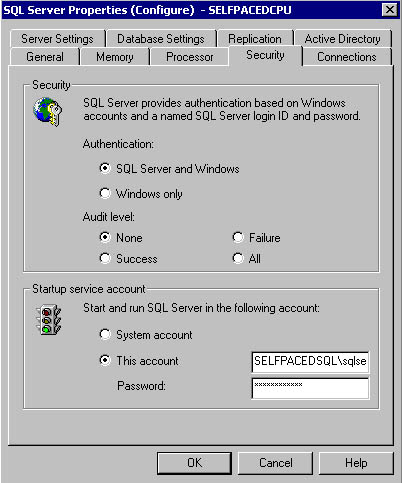 After you switch modes, you must stop and then restart the SQL Server service for this change to take effect. SQL Server Enterprise Manager will prompt you and ask if you want it to perform this task immediately. See Figure 10.3.

In this practice, you switch SQL Server 2000 from Windows Authentication Mode to Mixed Mode. 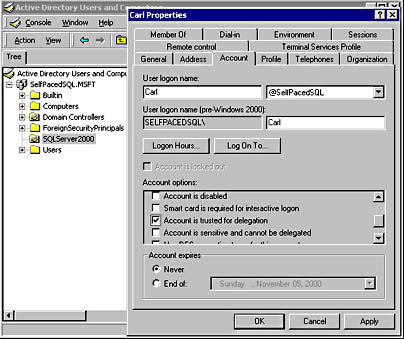 Enabling a computer to be trusted for delegation.

Finally, to use security account delegation, the SQL Server 2000 instance must have a Service Principal Name (SPN). You establish an SPN for a SQL Server 2000 instance with the Setspn utility, which is available in the Windows 2000 Resource Kit. You can assign an SPN in two different ways. You can use the Setspn utility to have a permanent SPN assigned by a Windows 2000 domain administrator to the SQL Server service domain user account based on a port number. Multiple ports and multiple instances require multiple SPNs. To enable delegation, you must use the TCP/IP Net-Library rather than Named Pipes because the SPN targets a specified TCP/IP socket. 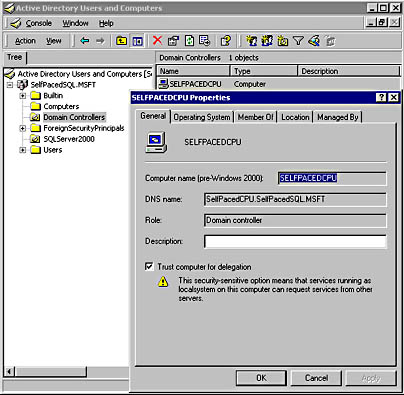 The preceding example adds an SPN on an instance of SQL Server 2000 named SelfPacedCPU.SelfPacedSQL.MSFT that is listening on port 1433 and using the SelfPacedSQL\SQLService domain user account.

The preceding example deletes an SPN on an instance of SQL Server 2000 named SelfPacedCPU.SelfPacedSQL.MSFT that is listening on port 1433 and using the SelfPacedSQL\SQLService domain user account.

If you change the SQL Server service account, you will need to delete any existing SPNs and create new ones.

To access SQL Server 2000, a database administrator must either grant access to existing Windows users and groups, or create SQL Server security accounts. A user can specify a connection to SQL Server 2000 either using his or her existing Windows credentials or by specifying a SQL Server login ID and password. The latter method is less secure and is not enabled by default. You must specify Mixed Mode authentication to permit SQL Server logins. Finally, for Windows authentication credentials to be passed between servers, you must enable security account delegation in Windows 2000.