Like any other component, a Web service should throw an unhandled exception to its client when it's unable to deal with the exception internally. However, two factors complicate this process. The first factor is that the client of the Web service might well be external to the organization running the service ”for instance, a client somewhere on the Internet. It's often not a good idea to throw detailed individual exceptions in these situations, because they can contain information that could be very useful to hackers trying to understand or break the Web service. The second factor is that when a SOAP client accesses a Web service,.NET will always translate any unhandled exception thrown by the Web service into a generic SoapException , thereby losing some of the information in the original exception. This can make debugging more difficult from the client point of view, so you need to consider how to make your Web service exceptions both easier to debug for authorized developers and harder to understand for unauthorized hackers.

If you click the Trigger raw exception button, you can see how the exception that's deliberately thrown by the Web service is perceived by the client application.

The resulting message box is shown in Figure 8-5. It shows quite clearly that the exception thrown by the Web service isn't the same as the one received by the client. Whereas the ThrowExceptionRaw Web method throws a NullReferenceException , the client in this case actually receives a SoapException . The SoapException message does show the text of the original exception, but that text is mixed with the standard "Server was unable to process request" exception message that you saw earlier in the Web browser. To try to extract the original exception details would be rather messy. The SoapFault field is correct, showing that the error occurred on the server, but the Web service URL is shown as blank. 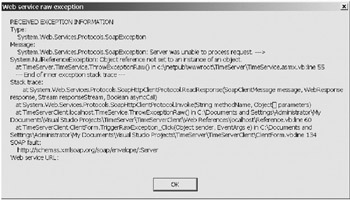 Figure 8-5: A Web service exception as it appears on the client

The most interesting information is in the first line of the stack trace ”the exception was thrown by the SoapHttpClientProtocol.ReadResponse method. The client ”or to be more precise, the client proxy ”uses this method to read the SOAP response message sent by the Web service method.

Obviously, the information shown in Figure 8-5 is not adequate for easy understanding of what went wrong inside the Web service. It would be much better if you could provide a custom exception with exactly the information that you need to know, whatever that might be. At the most basic level, you probably want to be able to programmatically identify the following information about the exception:

The real work is, of course, done within the private CustomException method, as shown in Listing 8-5. This function analyzes the original exception in order to build and return a custom SoapException containing the information that I mentioned previously as being the minimum required.

The code on the client side that catches the exception and displays it is shown in Listing 8-6. As you can see, it extracts the custom information that I specified by referring to each of the Detail child nodes by name. It also extracts the raw SOAP message for comparison and then displays the extracted information in a message box.

Listing 8-6. Displaying the Custom Exception in the Client Application

After all of this work, Figure 8-6 shows the message box as it displays the custom information that I added inside the Web service. If you contrast this information with that shown in Figure 8-5, you can see that a major improvement has taken place. Instead of having to parse the generic SoapException.Message in a messy way, all of the information is now readily available in individual child nodes.

Figure 8-6: A Web service custom exception as it appears on the client

Of course, you can adapt this code to add as many items of information as you wish to transfer, simply by creating an extra child node for each item.

If your Web service is running on the Internet, and is therefore subject to all of the security risks that come with that very public environment, you probably don't want to provide these detailed exception messages. They give away too much information to any hacker who's looking to probe or attack your Web service. It's far better in these circumstances to emit a bland , generic error message in the event of Web service failure. Listing 8-7 modifies the CustomException method shown previously in Listing 8-5 to check whether the client is on the same machine as the Web service. If not, it populates the exception Detail node with exception information that gives absolutely nothing away.

Figure 8-7: A Web service exception as it appears on a nonlocal client

The one remaining piece of giveaway information is the raw message that the HTTP handler adds to the custom SOAP exception. This contains information about the exception's stack trace that is better to suppress. The key to removing this last clue lies in the CustomErrors section of Web.config. This setting has three values:

The best setting for most environments is RemoteOnly , which is also the default setting, as shown in Listing 8-8.

This setting will remove the stack trace from the SOAP message for any nonlocal client. Note that you may need to reboot Visual Studio for this setting to take effect during Web service development.