The concept of market drivers is fundamental to understanding, developing, and prosecuting a winning business case. A driver may be defined as a market fundamental that is basic to meeting a buyer's criteria, need, or desire to have a product or service. A driver, however, constitutes the factor that will move a potential buyer into becoming an actual buyer. This understanding may be best exemplified by one example from AT&T, and another, by looking at an overall model relative to telecommunications equipment manufacturers.

In the AT&T Wireless case, at the time a wholly owned subsidiary of AT&T, Dan Hesse, a brilliant market strategist and at the time president of AT&T Wireless (he is presently CEO of Terabeam), with his team, determined that the fundamental and all-important market drivers in the wireless narrowband communication business in the United States were as listed in Table 1.

Conversely, in an important industry example, we see that most industry experts and investment analysts missed predicting the downturn in the telecommunications sector beginning in late 2000 and continuing into 2001. Yet, an understanding of the market fundamentals (drivers) clearly indicated not only that the market would decline but also approximately when.

For instance, from 1996 to 2000/2001, there were five primary concurrent market drivers that pushed Telecom equipment capital expenditures rates to approximately 26% cumulative annual growth rate (CAGR) over this period (see Table 2). [2]

Hence, the main drivers that took place concurrently in the 1996–2001 period created a voracious demand for telecom equipment that has been satiated or mitigated to a large degree (Figure 1). 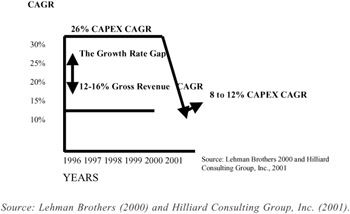 As we have seen, understanding the right market drivers permitted one company, AT&T Wireless, to grow rapidly and capture market share, while a lack of understanding of market drivers and their linear constraints caused many telecom equipment manufacturers to misperceive the size, breadth, and duration of the telecom equipment and service markets.

In fact, merely plotting the telecom capital expenditures (CAPEX) in 1995 and 1996 relative to gross revenue growth for that same period would have indicated the existing discontinuity between the CAPEX CAGR of 26% and the gross revenue CAGR of 12% to 16% overall for the industry. That is, as early as 1996, we should have seen that an impending correction would take place. And an understanding of the market drivers would have signaled approximately when the correction would take place.

The Past is Prologue

Now that we examined the recent market past and saw the importance of market drivers, it is important to see if there are additional tools coupled with a view of future drivers that can assist us in discerning the future with more clarity. Here, several tools in particular will assist us in this analysis. The first is the State, Gap, and Trend Analysis.

[2]Nugent, J. H. (2001). Telecom downturn was no surprise. Dallas Fort Worth TechBiz (www.dfwtechbiz.com), September 10–18, 22. Provided in this article was the analysis that permitted all to see the rapid decline in the telecommunications sector based upon key market driver satiation or mitigation.