The growing importance of m-commerce is fueled by the phenomenal growth in the wireless market in general. Shown in Figure 4 is the growth experienced in the wireless device market as well as in the subscriber base of wireless Internet services (Morrison, 2001). 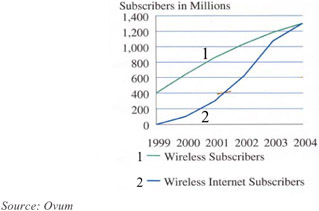 According to these forecasts, the global customer base for wireless Internet access is expected to match the overall wireless subscriber base by 2004 (more than 1.2 billion subscribers, or 20% of the world's population) (Morrison, 2001). This represents the number of users who have access to the wireless Internet but may not necessarily be using it.

This growth in wireless Internet subscribers is expected to be matched by a growth in m-commerce-related activities that vary by region, as indicated in Table 5, which outlines forecasted regional m-commerce revenues. These revenue estimates by Jupiter are on the conservative side at $22.2 billion, compared to other research groups that predict m-commerce revenues to be larger by as much as five times (Canvas, 2001). As such, m-commerce represents a market with substantial financial returns, along with additional benefits, such as improved branding and customer service through exploitation of the fast-growing wireless channel. According to Table 5, the fastest growing and largest markets for m-commerce are found in Asia, and, in particular, in Japan, followed by Europe.

A frequently asked question within the m-commerce industry is in regard to the killer application: Is there a killer application, and if so, what is it? Although one will be confronted with many answers, each supported with its respective rationale, a more likely scenario is that killer applications for m-commerce will vary by culture and by country. This is evidenced at this early stage of m-commerce by the varying demand for wireless applications around the world. In Europe, the killer application has been Short Message Service (SMS); in Japan, interactive games and pictures; and in North America, e-mail via two-way interactive pagers (e.g., RIM's BlackBerry) plus WAP-based wireless data portals providing news, stocks, and weather information.

These "killer applications" will take on many forms as the wireless networks and devices evolve, always improving network connectivity, device form factors, and capabilities. One expectation is that content, services, and applications for wireless devices will become increasingly available.

An overview of the three leading markets for m-commerce is provided next, in an attempt to understand the variations that exist in the adoption of m-commerce services in these different geographic markets.

With GSM being the single digital mobile telecommunication standard implemented, European countries are positioned well in their race to mobility. GSM has international roaming capability, it is supported in over 159 countries, and it accounts for over 64% of the world's wireless market (Evans, 2001). Consequent of the uniformity in network implementations in this region, market penetration is highly feasible, as interoperability issues are minimized. The last hurdle that network carriers will have to overcome is the estimated cost of US$80 billion necessary to upgrade the existing digital phone networks to accommodate 3G (Dorey, 2002).

To generate much revenue for the continuous upgrade efforts, as well as to alleviate the cost from the high license fees, the availability of wireless applications that are in demand becomes critical. According to the GSM Association, in Europe, SMS has been one such wireless application, for which demand exceeded 50 billion global text messages sent within the first quarter of 2001. During the same period in the United Kingdom alone, customers generated 3.5 billion text messages. SMS has been popular not only for messaging between wireless users but also as a marketing medium through which m-consumers can respond to television shows (e.g., MTV) that encourage audience participation. Due to the above demand for SMS, it has been coined as the "killer app" for Europe (Evans, 2001).

Extending from the communication applications, Europe also launched initiatives with transactional capabilities for commerce. One example is the m-shopping service provided by the Safeway grocery chain. Through PDAs provided by Safeway, m-consumers can create shopping lists and submit orders. These orders are then sent to the store, where the staff is responsible for collecting and packaging the purchased items for the customer to pick up (Evans, 2001).

In general, Europeans are receptive to m-commerce due to various factors. An industry-related factor involves the pricing strategy adopted by network carriers, who implemented a "caller pays" model for voice communication. Cultural factors include a "caf " culture (i.e., a tendency to be active away from home), as well as patience in using many keystrokes in generating text messages and e-mails on their wireless phones (Dorey, 2002). Finally, with an effective transportation system and relatively high gas prices, Europeans end up spending a lot of time on public transportation, with time on their hands. This provides them with strong motivation for using the wireless devices to invoke m-commerce services. Together, the above factors result in a higher acceptance of m-commerce.

One of the biggest success stories for the wireless industry has come from the Asia-Pacific region. NTT DoCoMo's i-mode is Japan's largest network carrier, with more than 30 million customers, capturing 59% of the domestic wireless market (NTT, 2002). Since i-mode's launch in 1999, the respective adoption rate and revenues generated have been the envy of wireless carriers around the world. This growth has been due, in part, to NTT DoCoMo's exclusive offering through i-mode, as competing network carriers operating in WAP could not offer comparable wireless content and services. Using packet data transmissions, fees for wireless services are charged by the amount of data transmitted and received rather than the amount of airtime.

Pioneering many of the wireless services worldwide, i-mode users have access to mobile banking, travel reservations, restaurant and town information, messaging services for news, i-mode-compatible Web sites, e-mail, entertainment sites, and downloadable ring tones. Some of the content is made available by DoCoMo at no cost to the user, while other content is subject to a monthly fee that ranges from 100 to 300 yens per month per offering.

The popularity of wireless services helped maintain a momentum that brought 3G to the Japanese market in the third quarter of 2002. With nearly 150,000 mobile phones being ordered, only 4500 were actually given out in this initial phase of "FOMA," which stands for "Freedom Of Mobile multimedia Access." Of these phones, 1200 were equipped with a video screen to facilitate some of the 3G-supported wireless applications, such as video playback (Evans, 2001).

In general, the Japanese culture has embraced technology, and along with the low-cost alternative of accessing the Internet (aided by a lower PC penetration compared to Western Europe and the United States) and charging based on data volume for wireless services, m-commerce has been very successful in Japan and is experiencing growth in other countries within this region (in particular, China and Hong Kong) (Dorey, 2002). Finally, with a similar transportation situation to that of Europeans, Japanese consumers end up spending a lot of time on public transportation with time on their hands. This provides them with a strong motivation to use the wireless devices to invoke m-commerce services.

The United States has been leading the way in adoption of wireless technologies in this region, followed by Canada, who is catching up on various levels (e.g., m-commerce growth, penetration of wireless devices). Overall, however, North America has been known to lag behind Japan and Europe in its m-commerce efforts. Several factors contribute to the slow adoption of m-commerce in North America. One of these factors has been interoperability, as currently there are six U.S. and four Canadian national network carriers that operate on different network standards (Dorey, 2002). This lack of common network standards will pose an even greater challenge to overcome (in particular, financially) in their efforts to evolve to a 3G environment. Furthermore, high PC penetration rates and a low-cost alternative for voice communications offered through wired telecommunications service do not create a desirable m-commerce-value proposition for consumers.

Culture appears to be acting as a barrier for m-commerce as well. North Americans, in general, exhibit a "stay-at-home" social outlook. Also, there has been a demonstrated lack of patience and an expressed dissatisfaction with the usability of currently available wireless devices (e.g., challenging to generate e-mails on a wireless phone). Finally, little knowledge of wireless technology and applications by the average North American consumer poses yet another challenge for m-commerce adoption (Dorey, 2002). Another factor contributing to the slow adoption of m-commerce in North America could be the affinity of North Americans to driving their own cars. The public transportation infrastructure is inferior to both Europe and Japan. The cost of owning and operating a vehicle is lower compared to that in Europe and Japan. All of these factors combine to instill a driving culture in North America. For example, because most people drive to and from work every day, they are not in a position to use mobile devices for m-commerce services during their commute, as easily as those using public transportation.

Consequent of the above issues, the wireless consumer market has been small. However, the business market has been more responsive. In particular, one of the major trends in the United States has been the use of Research In Motion's (RIM) wireless devices for receiving and sending corporate e-mail. Through an always-on service for wireless e-mail using the DataTAC and Mobitex wireless networks, many companies adopted this technology to further enable their organizations. In addition, wireless Web access via WAP-enabled cell phones is a growing application in the United States (Dorey, 2002).