Some of the data access code I've seen in the past 25 years seems quite fetching—other code is downright ugly (sorry 'bout that). But we do need to touch on techniques that, at least on the surface, seem like good ways to quickly populate and offload Recordset objects. For example, fetching Recordset data row-by-row often seems expensive and downright unnecessary. However, offloading rows into a Variant array or delimited string can also be costly. As a means to pass data from tier to tier, the Variant array can be especially costly. We'll discuss this more completely in Chapter 8, but consider that Variant arrays transmit their data in padded Unicode data structures. These behemoth arrays take considerably longer (almost three times as long) to move from tier to tier when compared to Recordsets.

As I see it, there are two parts to the fetching operation. (There are probably three but I can't think of a third.) First, fetching completes membership population. This, in turn, releases share locks on the server. This is good—good for scalable applications and for those other clients waiting to perform updates on the rows and pages (and perhaps tables) that you have share locked. Second, fetching can "offload" the Recordset to another control, to a file, to a stream, or to a named memory area. This is often necessary to display, transport, or persist the Recordset. But it's not always needed. Sometimes we can leave the data in the Recordset, make changes, and send the whole Recordset (or just the changes) to another layer.

Basically, there are many techniques used to populate and unload Recordsets:

Remember that ADO self-populates if left to its own devices. That is, after the first set of rows arrives and control returns to your application (whether or not you're running asynchronously), ADO continues to populate your Recordset behind the scenes on its own thread.

ADO begins (and tries to end the population process) by prefetching a set of rows before returning control to the client. By default, this initial set contains 50 rows. You can control the number of records in the initial fetch by setting the "Initial Fetch Size" property in the ADO Recordset Properties collection.

Displaying Rows with the MSHFlexGrid Control

One of the easiest and fastest ways to get the Recordset values in front of the user is to set the MSHFlexGrid control's Recordset property. I've been using this approach for some time now, and it seems to work fine—except in one situation. When using server-side cursors, you cannot inspect the Recordset object's EOF (or almost any other) property[2] before assigning the Recordset to the grid. If you do, you'll get a 30023 error from the grid. (Sigh.) I submitted a bug report on this issue, but they aren't going to fix it. You'll have to switch to client-side cursors for this to work—or don't touch the EOF property.

After the data is displayed in the grid, as shown in Figure 7-1, you'll notice that the headings are filled in for you, but the column widths will usually need to be adjusted to match your Recordset data. To fix this, I usually loop through the grid when it's used for the first time and assign appropriate widths. After you set the ColWidth property for each column, setting the Recordset property has no further effect on the column width settings. I use the TextWidth function in Visual Basic to return the correct number of twips to assign to the ColWidth property. This function accepts a string whose width is translated into twips. I use a variable-length string of M characters because the M character is a maximum width character, and when using proportional fonts, this can make a big difference. For example, the number of twips is far less if you use a string of period or space characters than it is when using a wider character. Using a string of M characters makes it easier to estimate the number of twips needed for an appropriate number of characters in each field. 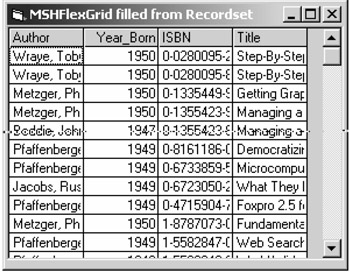 The Choose function in the following example returns an appropriate number of M characters based on the width of each Field in the Recordset.

Another way of seeing the Recordset data while debugging the application is to dump the rows to the Immediate window, as shown in Figure 7-2:

Figure 7-2: Use Debug.Print to display the Recordset field names and values in the Immediate window.

I use the following routine to show the Field names followed by individual row values. While this is pretty intuitive, it might be handy to dump the Recordset while debugging.

If you use the adAsyncFetch option as an Options argument on the Open method, ADO continues to fetch rows behind the scenes after synchronously fetching the initial set. This wasn't implemented in ADO until version 2.5, despite being an acceptable Options argument for some time. However, if you execute the MoveLast method on a scrollable cursor, you disable the asynchronous operation—your code blocks while ADO dutifully fetches the rowset.

It is apparent that server-side cursors were never intended for asynchronous Recordsets—specifically adAsyncFetchNonBlocking and adAsyncFetch. However, server-side cursors do work (meaning they free up the client to do something else) with adAsyncExecute and a Static cursor type. However, they still block, because you cannot reference the data in the Recordset until the cursor is fully populated.

In ADO, you can get an asynchronous operation through the ADO Connection or Command objects. To enable this option, use one of the following enumerations with the Open or Execute methods:

The event handlers are activated if you declare the ADO Connection and Recordset variables using the WithEvents option, as shown in the following code:

When you request events on the Recordset object, asynchronous operations fire the following events:

Quite a few programs use Do Until or Do While loops to fetch and offload the data rows until RS.EOF returns True. This is not one of the 7 deadly computer sins (a topic for another time), but it is one of the top 20 sins. Sometimes you don't have a choice, but consider what's going on in the loop:

ADO supports two methods for offloading the entire contents of, or a subset of, the Recordset to either a Variant array or a delimited string. When I first started working with RDO (which supports similar functionality), these methods seemed very cool—fast, easy, and powerful. However, the bloom is off the rose with these methods, as far as I'm concerned, now that I know their impact and how they were implemented.

GetRows extracts some or all of the Recordset rows and sends the rows to a Variant array. The following code uses the default settings to extract the entire Recordset:

In RDO, you had to provide a very large number (well beyond the number of rows expected) to extract all of the rows from your Recordset using the GetRows and GetClipString methods; but by default, ADO extracts all rows. You can fetch a few rows at a time with either method by using the Rows argument. However, only the GetRows method lets you select a starting position in the Recordset using the Start argument.

Here are some additional examples. First, we create a Recordset with three Fields. Then, we move down five rows and capture a bookmark. And then we reposition to the top of the Recordset.

In the next part of the code, we dump all fields from the 100+ rows into the array. If you use −1 for the Rows argument, ADO fetches all remaining rows, starting at the current record pointer.

In this next case, we start at the first Recordset row and extract 10 rows, but just the Title field.

This next code example extracts five rows starting at the bookmarked row (which is row 5), and dumps just the Year_Published field.

The next line extracts just the ISBN and Title fields from all rows.

To reposition the CRP to the beginning of the Recordset, I used the MoveFirst method before fetching the rows. However, you don't have to do this, and if the Recordset is opened as forward-only, you won't be able to—at least not without rerunning the query.

If you want to know how many Records met the criteria in your query's WHERE clause, you can check the RecordCount property. However, RecordCount is not implemented for the default Recordset (RO/FO) or for any forward-only cursor—it always returns −1. If RecordCount does not seem to work on your scrollable cursor, try using MoveLast to force population, but be prepared for a wait while all rows are fetched. Remember, you can also examine the array boundaries of the Variant array constructed with the GetRows method if you want to return a valid row count.

Switching to a scrollable cursor just to get the RecordCount does not make sense, because of the considerable overhead imposed by ADO to manage scrolling. On the other hand, some folks recommend adding a SELECT COUNT(*) to the query to return the number of qualifying rows. However, this makes the server work twice as hard on the query—once to get the count, and again to fetch the rows. COUNT(*) is not necessarily accurate anyway, because the row count can change between queries. If you surround the two queries (the COUNT(*) and the row-returning query) in a transaction, you prevent changes to the database while you're fetching, but this imposes additional scalability problems. If you use adUseClient for the CursorLocation, ADO creates a Static cursor, which supports the RecordCount property without problems.

For those of you not familiar with Variant arrays, here are a couple of tips. First, the UBound function can be very helpful. It returns the dimensions of the array; but remember that Variant arrays are indexed by columns and rows, not by rows and columns as you might expect. When you use the UBound function to see how many rows and columns resulted from your GetRows method call, use this syntax:

After you know the dimensions of the Variant array, you can extract the data, like this:

If you're not sure about how the array elements are numbered, you can simply check out the Locals Window in the Visual Basic IDE—it dumps the entire array for you, as shown in Figure 7-4. Notice how the array boundaries are shown. Figure 7-4 shows three columns (0, 1, and 2), and 1 row (0-based).

When using these techniques, remember that executing GetRows on an empty Recordset will result in a trappable error being raised.

In these cases, it is a good idea to assign Empty to the variant variable. So, whenever you are expecting data in a variant, check to see if it is Empty before referencing array elements.

[2]David Sceppa and Rick Nasci fought for some time to get this "bug" fixed. The ADO folks sent back a long paragraph describing how this was a "by design" feature.

[3]If your code executes a MoveFirst just after the Recordset opens, you might trigger another execution of the query for no purpose.