Just as the 1D system could be extended with a second line intersecting the other, so the 2D system can be further extended by a third line intersecting the origin. This system is called the 3D system and represents more closely the kind of world humans exist in. This extra line is called z and expresses the concept of depth. Beyond a 3D coordinate system, it becomes difficult for the human mind to envision any number of extra dimensions, and so coordinate systems will not be explored beyond three dimensions in this book. Points in 3D coordinate systems are written in the form of (x, y, z), such as (5, 3, 9). 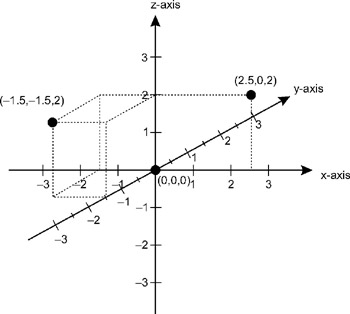