An I/O target is more than just a pointer to a device object. Each I/O target supports methods to:

By default, WDF sends I/O requests only to I/O targets that are in the working state, so that your driver can avoid sending I/O requests to a target that has been stopped or removed. A driver can override this default for a target.

KMDF  A KMDF driver can also supply callbacks through which the driver can request notification about Plug and Play state changes for orderly or surprise removal of a remote target device.

For example, in some situations a driver might require information from a different device stack before it can complete an I/O request. In this case, the driver creates a remote I/O target and an I/O request, and then sends the request to the remote target. The framework directs the request to the top of the device stack for the remote I/O target.

A driver can also use a remote I/O target to send a device I/O control request to the top of its own device stack, so that all drivers in the stack have the opportunity to process the request. If the driver sends the request to the default I/O target, only drivers below it in the stack receive the request. To send such a request, the driver gets a pointer to the WDM DEVICE_OBJECT at the top of its own device stack by calling the I/O manager's IoGetAttachedDeviceReference function and then creates a remote I/O target by using the returned pointer.

In addition to categorizing I/O targets as default or remote, WDF categorizes them as general or specialized. A general I/O target can represent a device object for any kind of device. The driver that sends the I/O request is responsible for formatting the request in the way in which the target expects to receive it. Thus, the driver must fill in any device-type-specific control blocks and so forth. General I/O targets do not support any special, device-specific data formats.

Specialized I/O targets provide data formatting that is specific to a particular type of device, such as device-type-specific request blocks. If the framework implements specialized I/O targets that support your device's data format, your driver should use them. For some device types, your driver might be required to use WDM structures to properly format I/O requests for a particular target.

Specialized I/O targets enable extensions to WDF that support new hardware and protocol types. Consequently, individual drivers are not required to implement basic support for a new industry standard. Instead, Microsoft can add that support to WDF, where it can be tested and maintained for all drivers.

WDF supports specialized I/O targets for USB devices in both KMDF and UMDF. WDF sends USB request blocks (URBs) to communicate with USB I/O targets. The USB I/O target DDIs include methods that construct and send the URBs so that the driver itself is not required to build and send them.

By using an I/O dispatcher, UMDF can map a generic read, write, or device I/O control request to a specific function call for an I/O target. For example, the USB dispatcher receives a generic read request and in turn calls a specific function in WinUSB.dll. The UMDF driver should not call the WinUSB functions directly, because such I/O requests immediately leave the current device stack and enter the other subsystem. The framework cannot intercept the request to ensure that lower drivers in the device stack have the opportunity to process it.

KMDF  KMDF drivers do not require either I/O dispatchers or I/O target files because kernel-mode drivers can use IRPs to communicate directly through the I/O manager. The IRP is a consistent interface that all kernel-mode device stacks use. 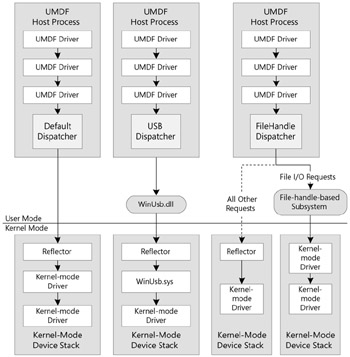 A file handle represents a logical session for I/O requests. UMDF requires that all I/O requests have session information that is represented by a file object and file context.

A driver can send I/O requests in the same session as the I/O target by using this file. Alternatively, a driver can create its own session by calling IWDFDevice::CreateWdfFile, thus creating its own intra-stack file.

File objects are one of those kernel objects that didn't keep up with the transition to Plug and Play between Windows NT 4.0 and Windows 2000. In Windows NT 4.0, device stacks tended to be shallow, and the drivers more often formed connections between devices in layered stacks by opening the underlying device by name than by attaching to the device stack. Attachment was mostly used by filters. If the filter needed to maintain per-session state, it could piggyback that state on the lower driver's file object.

In Windows 2000, device stacks became more layered and the layering mechanism moved to device attachment. Attachment has numerous benefits but because drivers no longer "open" the lower drivers there aren't any file objects between the drivers.

With UMDF, we needed intra-stack sessions again, because the UMDF driver is seen as just another client by the kernel-mode portion of the device stack. Managing the session information is a responsibility which falls mostly on the FDO and is encapsulated in the I/O target file object.

Considering that UMDF drivers have this extra requirement, we decided to provide some benefit as well. So we provided a mechanism to support intra-stack sessions (file objects) within the user-mode portion of the device stack.-Peter Wieland, Windows Driver Foundation Team, Microsoft