This lesson presents an overview of the network printing process and describes how a shared printer works within a network operating system.

As shown in Figure 11.1, when network users want to print data on a shared network printer, they send their data to a print server. The server then feeds that data to a shared printer.

Figure 11.1 Data to be printed goes first to the print server

A print spooler is software that intercepts a print job on its way from the application (a word processor, for example) to the printer, and sends it to a print queue. A print queue is a buffer where the print job is held until the printer is ready for it.

To send print jobs to a printer, users have to be able to identify or see the printer from their computers. In other words, the network operating system (NOS) must provide a way for the printer to contact network computers to identify itself and signal that it is available.

Every NOS has its own version of printer sharing, but each requires the administrator to provide printer drivers and supply the NOS with information about the printer.

This process can seem complex, but most network operating systems have utilities to help administrators enter the information. In Windows NT Server, for example, a utility called the Print Manager presents the printer setup screen shown in Figure 11.2. 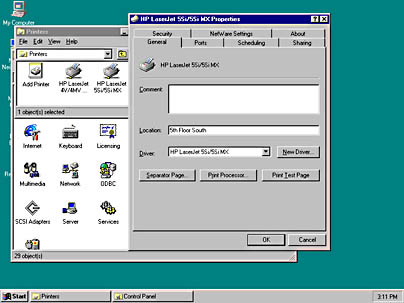 Connecting to a Printer

After a printer has been shared, users must use the NOS to connect to it. To do this, users need to know two things:

This explains why the administrator needs to supply a name for the printer during the sharing process. Current computer operating systems, such as Windows, provide a graphical user interface to help users connect to a printer.

In this exercise, a list of terms is given in the left column. For each term listed, fill in the definition in the space given in the column to the right.