Using Internet Protocol Security (IPSec) is the long-term solution for secure networking. More and more corporations are starting to use IPSec. It provides a key line of defense against private network and Internet attacks, balancing ease of use with security. This lesson discusses the technologies collectively referred to as IPSec.

As the Internet and intranets have evolved, the need for security has increased. Users are mainly concerned that that network traffic is safe from the following:

IPSec is a framework of open standards for ensuring private, secure communications over IP networks through the use of cryptographic security services. The Microsoft Windows 2000 implementation of IPSec is based on standards developed by the Internet Engineering Task Force (IETF) IPSec working group. IPSec has two goals:

Both goals are met through the use of cryptography-based protection services, security protocols, and dynamic key management. Starting with these two goals provides both the strength and flexibility to protect communications among computers on a private network, in remote sites connected by the Internet, and by dial-up clients. It can even be used to filter data packets on a network.

IPSec is based on an end-to-end security model, meaning that the only computers that must know about IPSec are the sending and receiving computers. Each handles security at its respective end, with the assumption that the medium over which the communication takes place is not secure. Routers that forward packets between the source and destination are not required to support IPSec. This model allows IPSec to be successfully deployed for these enterprise scenarios: 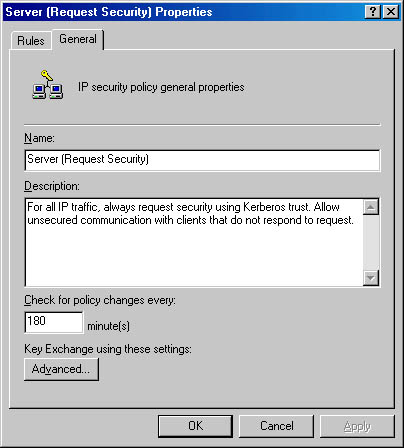 This service is an IPSec mechanism residing on each computer running Windows 2000. Before IP datagrams can be transmitted from one computer to another, a security association must be established between the two computers. A security association is a set of parameters that defines the common security services and mechanisms used to protect the communication, such as keys and security properties.

The IKE centralizes security association management, reducing connection time. The Oakley protocol generates the actual keys that will be used to encrypt and decrypt the transferred data. IKE performs a two-phase operation: 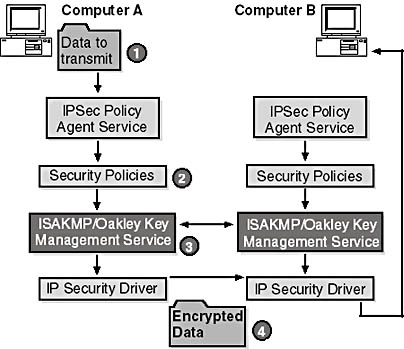 IPSec provides encryption of outgoing packets, but at a cost in performance. IPSec implements symmetric encryption of network data that is very efficient. However, for servers supporting many simultaneous network connections, the additional cost of encryption is significant, so you need to test IPSec using simulated network traffic before deploying it. Testing is also important if you are using a third-party hardware or software product to provide IP security. You can define IPSec policies for each domain. You can configure IPSec policies to do the following:

Consider using IPSec to provide security for the following applications:

Consider the following strategies for IPSec in your network security deployment plan: