The Intel 80x86 processor family has internal storage that is referred to as registers. These have been organized into seven groups: general-purpose data registers, segment registers, status registers, control registers, FPU registers used by the FPU (floating-point unit), MMX registers, and XMM registers. Please note that the FPU and MMX registers share storage area and thus are mutually exclusive (only one of them can be used at a time). Each has its own set of functionality.

The following registers and their ranges are for dealing with the SIMD instruction sets directly. They do not include system registers. 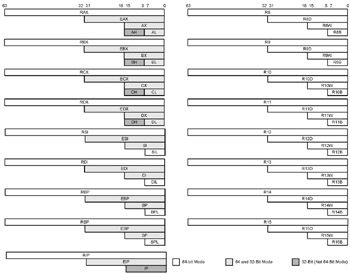 The general-purpose registers are used as memory pointers, address calculations (displacement w/scaling), logical bit, and mathematical operations. There is an exception as the RSP register is the stack pointer and has limitations such as it does not support scaling and displacement. In relation to the segment registers, the 64-bit stack pointer is used in conjunction with the stack segment-selector (SS) register as a default.

This covers all the 32-bit processors. So now that I have complicated things for you with some history, let us examine the new REX prefix.

The prefix REX is not an instruction, it is an invisible prefix. It is similar to the operand-size and address-size prefix that the assembler and compilers inject into the code when switching before a 16-bit and 32-bit access method. With the new 64-bit instructions it has been extended again.

With the introduction of 64-bit processors a new invisible prefix is used: REX ( 40h4Fh ). So if this new processor is running in 64-bit mode the previous rules still apply, but to access the 64-bit data a REX opcode is injected:

The instruction format is a grouping of a prefix that is optional, opcode, mod r/m, sib, displacement, and data. This book does not get into the nitty-gritty of how an instruction, registers, and/or memory references map into an actual opcode. But the bit mapping for the mod r/m is as follows :

There are other mappings but this is sufficient. The reason this book does not get too deep into details is that you are probably not writing assemblers or compilers. If you were, then you mostly would not need this book except as a reference. It is just one of those interesting tidbits but unnecessary for assembly language programming or debugging. "s-i-b" represents (scale-index-base) byte.

In Protected Mode these registers are referred to as "selectors" and in Real Mode "segment registers." In Real Mode they are used in conjunction with an index register to calculate a memory address. As they are functionally the same, in this section "segment" will mean both. They are sometimes referred to as segment-selectors.

Note: The FS and GS were not available prior to the 386 processor.

When modifying any segment-selector register you must first save a copy of its stored value and restore it before exiting your function or your program will go "BOOM!" (That is a technical term !) Well, it will not explode as it will just cause the process to crash, but it will sure seem like it exploded. (Ask any assembly language programmer!)

If you are writing a Win32 type application, then typically all the segment-selectors are used in the execution of your code but are usually not denoted in your code as the defaults will be used. The FS and GS are used in your assembly code typically only in device drivers. This is the case of a flat memory model and the DS and ES are set to the same base address in memory. This section essentially becomes a no-brainer! You can completely ignore the segment registers since the DS, ES, and SS are set to the same segment and the indexing registers have used one or the other segment register as a default.

If you are writing an Extended DOS or other OS-based application, then you will typically use most or all of the segment-selector registers, especially in your low-level operating system drivers.

There are eight 64-bit MMX registers (MM0, MM1, MM2, MM3, MM4, MM5, MM6, MM7). These are 64-bit registers that can deal with a single 64-bit number, or two 32-bit, four 16-bit, or eight 8-bit packed values. In the 3DNow! instruction set they used for both integers and floating-point value pairs. These registers were introduced with the Pentium Pro series processors. There are no flags to set or read but based upon the instruction the individual packed data values are treated individually to effectively replicate a desired instruction.

There are eight 128-bit SSE registers (XMM0, XMM1, XMM2, XMM3, XMM4, XMM5, XMM6, XMM7) for pre 64-bit and eight additional registers (XMM8, XMM9, XMM10, XMM11, XMM12, XMM13, XMM14, XMM15) for 64-bit or larger data processors. These are 128-bit registers that can deal with two single 64-bit, four 32-bit, eight 16-bit, or sixteen 8-bit packed values, whether they be integer or single/double-precision floating-point. These registers were introduced with the PIII series processors. There are no flags to set or read, but based upon the instruction the individual packed data values are treated individually to effectively replicate a desired instruction. The functionality of the 64-bit MMX registers was migrated to the 128-bit SSE registers, thus doubling the size but without the burden of the FPU vs. MMX data type switching. Whenever possible, these should be used instead of MMX.

The Art of Assembly Language

Windows Assembly Language and Systems Programming: 16- and 32-Bit Low-Level Programming for the PC and Windows