Characters are the agents through whose actions a drama is told. By identifying with a character and the outcome of their goals, the audience internalizes the story's events and empathizes with its movement toward resolution. 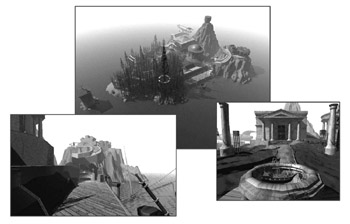 All characters are defined within the story by what they say, what they do, what they look like, or what others say about them. These are called methods of characterization. To better understand characters, let's look at some examples of characters in classic stories and in games.

Not to set our expectations too high, but let's first consider one of the most famous protagonists in English drama: Hamlet. He's one of the most complex characters ever constructed. Hamlet is a prince whose father, the king, is killed by his uncle. When the story begins, Hamlet's mother, the queen, has just married the uncle, making him king. Hamlet wants to avenge his father by killing the new king, but wavers between determination and inaction. His fascinating vacillation between the two courses has produced hundreds of years of study.

Without a doubt, Hamlet is an example of a 'round' character. In contrast to Hamlet, another character in the same play, Prince Fortinbras, is 'flat.' Fortinbras has no defining traits and no complexity of character. When presented with a similar decision, Fortinbras simply avenges his father's death and moves on, without any of the soul-searching that plagues Hamlet. Fortinbras provides a foil, however, to Hamlet, which highlights Hamlet's inaction by showing us a character who has no dilemma with decision.

To date, there are no game protagonists with the fullness of character that we find in Hamlet. However, that may be partly because of the structure of the medium itself. Game characters that are controlled by the player do not always have the opportunity to act freely. The player is assuming responsibility for their actions, which limits the degree to which they can demonstrate their own personality and inner thought process. Game characters also need to strike a balance between being flexible enough so that a wide range of players can identify with them, and being so flexible that they become generic and flat.

Early characters were completely defined by how they looked, with little or no attempt at characterization. Mario, in his first appearance in Donkey Kong, was defined by his funny nose and signature cap and overalls. While his motivation, rescuing Pauline, was integrated into both the formal and dramatic aspects of the game, he was ultimately a flat, static character, who did not change or grow over the course of the game. More importantly, Mario would not do anything to accomplish his goal without the player's control.

Some types of game characters are not flat, but both rounded and dynamic, in that they are specific and grow over the course of the game. Many examples of rounded, dynamic characters can be found in role-playing games, where the goal of the game is usually centered in the activity of character creation and improvement.

Sometimes, game characters are not entirely in the control of the player. Characters may have a sense of autonomy and this creates an interesting potential tension between what the player wants and what the character wants. A very early version of this autonomy is the character of Sonic the Hedgehog-Sega's answer to Mario. If the player stopped interacting with Sonic, the little hedgehog let the player know of his dissatisfaction by crossing his arms and tapping his feet impatiently. Impatience was central to Sonic's character: he did everything fast and had no time to spare. Unlike the blazingly fast actions controlled by the player, however, the toe-tapping routine was Sonic's own, and established him as a unique character.

Of course, Sonic's toe-tapping had no impact on gameplay, but the tension between player-controlled action and character-controlled action is an interesting area that has been explored to great effect more recently in games like The Sims, Oddworld: Munch's Oddysee, and Black & White. If the feature 'free will' is turned on in The Sims, characters will decide on their own course of action (assuming the player hasn't given them anything specific to do). Players can stop a character from performing an action at anytime, but with this feature on, the game usually unfolds as a complicated dance between what the player desires and what the character 'wishes.' This sophisticated model produces dramatic results that the player feels both responsible for and yet surprised by. 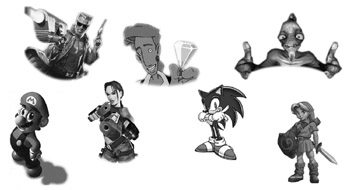 In general, game characters are evolving to become rounded, dynamic individuals that play an increasingly important part of many games' dramatic structures. A good understanding of how to create interesting and realistic characters using traditional dramatic tools can add to the effectiveness of characters in your games.

Name three game characters that you find compelling. How are these characters brought to life within the game? What allows you to identify with them? Are they rounded or flat, dynamic or static?